Time is Fleeting Many however, don't want to believe this.
For them we provide a comforting lie:
"That asshsat that Buzz Aldrin punched didn't know the HALF of it!"

For everyone else, the politics is below the fold...

The national debt...
This is bad
Actually, it's wore, because that was the debt at 11:06 this morning. You can look up the current one here.

This can't go on.

There's a surprisingly thoughtful and balanced  overview of the various schools of thought on this situation exactly where one would not expect to find it...on a geology blog.

The fellow is not particularly alarmist but he does note this towards the end of his VERY long post.

Padoan et al. believe that, below some threshold, public debt has little negative effect on economic growth.  However, their theoretical model indicates that at higher debt levels there is "the possibility of a vicious circle of high debt, low growth and unsustainable public debt dynamics.â€  Their analysis indicates that "on average, a country recording a [public] debt ratio above 106% would see its debt ratio spiral out of control and its economy slump in the absence of offsetting policy action.â€ The U.S. might reach that point between 2020 and 2030, on its present course.

Which brings us to this chart...

Note that the current trends look closer to the CBO's alternative scenario rather than their more pollyanish one. 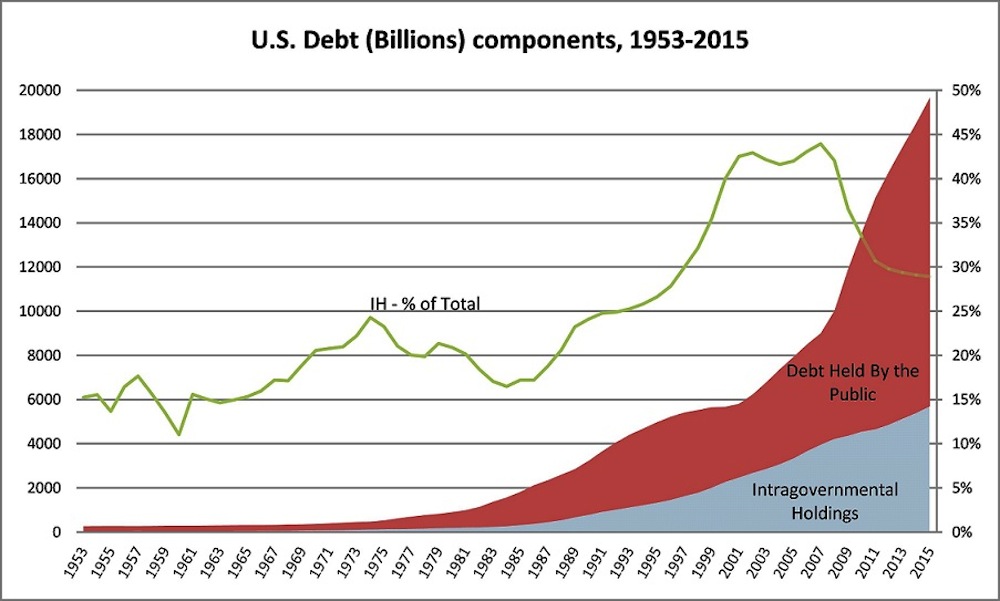 the green "IH" line on this chart refers to Internaly HEld debt, that is, debt in various trust funds like social security. Note how those trust funds start to taper off as they are used up...just as the debt goes thru the roof. This is because....

The 'boomers' are beginning to retire in droves. If something is not done we'll have over 23% of the country on Social Security by 2050.

"If something is not done" implies options but these are limited.
Everyone opposes culling the numbers of old people...oh wait...IPAB better known as death panels...OK those of us opposed to Obamacare consider that a non-starter and evil. So what is to be done?
It will have to be either a cut off of benefits at some point for new recipiants, privatizing social security (preferably along the Chilean model) means testing  or a combination of the three.

Complicating this is the fact that the boomers are retiring now. Any cut off or even major adjustment really needs to happen at least a decade in advance so those being affected have time to make financial adjustments.

But time is fleeting...if this isn't resolved by about 2020 it will be too late. Too many will have retired to make a difference and the cascade effects will swamp any adjustments.

Privatizing along modified Chilean lines is probably the best long term solution, but it can't be done all at once and should be done over about two or three decades MINIMUM to prevent a vast influx of money all at once creating a bubble economy that will blow the whole world economy up. This makes the solution unlikely given US election cycles.

Means testing is probably inevitable and has the benifit of potentially appealing to the Left ("SCREW THE FATCATS!1!") while not being without ethical merit to conservatives either. Thus there is at least one point where both sides can come together.

However in the unlikely event that all that third rail stuff can be accomplished, the debt still needs to be gotten under control....and we still don't know exactly HOW much of a fiscal debacle Obamacare is going to be...only that it will be a doozy.

The Dems made it very clear during the recent budget crisis that they are not going to negotiate in good faith, While that sentance flies in the face of the media narrative, the fact is that the Republicans made several offers all of which were rejected.

The only realistic way to reduce the dept as a percentage of GDP (which is what matters) is to grow the economy and the only things that will do that (reducing regulations, cheap energy and lower taxes, especially on businesses) are absolutely anathema to the Democrats worldview.

The last opportunity to save the country from fiscal collapse without a lot of pain was 2012. After 2016 the pain necessary to fix things will be untenable politically...so things won't get fixed before we end up in some Weimar style meltdown.

Thus we on the right need to win big in 2014 and 2016.
That means supporting the Republicans...not some utopian Libertarian insurgent we all wish would win...'cause it's just too serious right now to go wobbly. THere is plenty of blame to be laid on those Republicans who did nothing to reduce the size of government but the alternative has been disastrous.

This isn't going to be popular amongst those who (like myself) see the DC establishment as the crux of the problem and are fond of the Tea Party. By all means, Primary the Lindsey Grahams and use primaries to get us the best, most fiscally conservative field possible. But after the primaries we have to go with what we've got and not stay home and pout.  There may be some nose holding in the voting booth, but we are coming up on the last, Hail Mary pass possible to save the Republic.

1 This one's a nice, simple straightforward, and absolutely horrifying graph.