Snow Apocalypse  Al Gore must be in Virginia.

What would be a trivial a moderate example of snow in many northern cities has a disproportionate effect on areas that go years with no more than a dusting. Case in point: the cities of the Tidewater area of Virginia where it has been snowing for 18 hours.

I'm currently semi-stranded at Worlds Best Comics looking at weather radar website that tells me  the snow has passed on....and out he window where my own  eyes are telling me that it is still coming down fairly hard. We've got perhaps 6-8 inches here in Newport News but there is a considerable amount of ice on the roads (over an inch) and the snow has alternated with sleet. On the Southside ( the other side of the 'Roads" ) where accumulations of more than an inch are unheard of, they got hit quite a bit harder. I'm watching cars drive sideways down Warwick Blvd. Given that the wind is howling, the bridge-tunnel is iced over and things are notably worse in Portsmouth, I'm just not gonna deal with that.

1 Is there a corner of the store where they'll let you sleep?

SOTUS 2010
Random, real time stream of consciousness thoughts on the State of the Union speech. Now mercifully hidden below the fold.


Other reactions here, here, here and Wonderduck has one of the healthiest and well grounded SOTUS night posts right here.

The First of Many? Via Instapundit comes this NYT piece that suggests that the recent earthquakes in Haiti are the first in a protracted cycle similar to one that occurred in colonial times. According to the articles map, Cuba, Jamaica and Hispaniola are right on the fault in question and PuertoRico is is in danger as well. The USGS page on Puerto Ricos earthquakes is here.  Note that tsunamis have historically figured in the area as well.
Hopefully we can learn lessons from this response as we may well need them in the coming years.

Repair Bills Suck! The Blue Bomber suffered a steering pump failure, a brake failure and an electrical failure all at the same time. It turns out that the steering pump was squirting power steering fluid into the electrical system....the brakes were unrelated.
The next day the alternator on the Pickup of Peril died. Like the Blue Bombe,r it is nearly 30 years old and thus requires a special order from Japan. (Next time I'm there..I oughta buy parts)
Later that day I borrowed the parents van. As it is not graced with a parking decal I parked where I always park the van, in the Convocation Center Parking Lot. All doors to the Ted Constant Convocation Center have their clearance clearly marked as 8 feet two inches. At the entrance next to the McDonalds..this number is a damned lie. I discovered this at the expense of the roof on my parents van.
On the bright side.....My new iMac (The cost of which would have covere 3/4 of theserepair bills....) is now talking to my WiFi again.
I can do homework...and..umm...stuff.

1 Did you desecrate a shrine or something?

Zombjias!...Zombjias I say!
Those who know what this means should commence hacking with all due alacrity.

Those who don't should click on the image. After all, the first hit is free, (and all subsequent hits are too!).

7+ Quake in Port Au Prince As if there is not enough misery in Haiti....

It looks really bad ( BBC video here). It may be the largest earthquake on Hispaniola in recorded history. fRom the video, the presidential palace appears to be demolished. Most buildings in Haiti are not nearly so well built. Thousands are believed dead but there is very little info out of the country right now. Most of the pics seem to be via Twitter.

The Anchoress has a round-up on charities that can help and recommends Food for the Poor, which not only focuses on Latin America and the Caribbean but has a better than 95% efficiency rating with their funds. I've heard good things about them as well.

1 The first US units to show up and start helping were from the Coast Guard.

Jonah Goldberg Sold Me a Pizza Saturday, I read Goldbergs piece on the new self deprecating Dominoes campaign. Being bored, (and REALLY tired of blackeyed peas) I decided to have one delivered to the comic shop and drove out there to split it with 'The Bob'. Going online to find the number of the Dominoes across the street from the shop I encountered their online ordering system and gave it a whirl.

It's very much improved in quality, though its a bit more expensive as well. Their pizza is now one of the 2 or 3 best offered by any of the chain restaurants. I ought to have blogged about it then but having a laptop with only limited connectivity puts a crimp on ones blogging...and I thought about it and figured I'd look like some sort of geek if I admitted I was getting food advice from National Review.
Well, now I'm behind the curve, 'cause all the cool kids are talking about it now. Also, upon reflection...I AM a geek.

Also: New computer, which should arrive Thursday or Friday. (I anticipate that the arrival of said item will make for easier blogging).

Economic Indicators In the comments to an earlier post Steven Den Beste asks how the Christmas rush went at UPS last month.

Specific numbers are, of course, proprietary. However, volume was down a bit overall. It seemed that we had a little more volume going to the stores than last year. It also seemed that residential deliveries were down a bit from last year. Both of these observations are subjective and as I was completely uninvolved in any deliveries this year (for the first time in 16 years) I was in a poor position to gauge, but that was certainly the way things seemed to be rolling. I suppose this makes sense last year the retailers were a bit panicked by the crash and consumers hadn't groked the gravity of the situation, whereas this year consumers are looking at the job market with fear and retailers desperately need to clear inventory for tax purposes.

Even to the extent these observations are accurate they may not be typical. Southeastern Virginia got quite a kick in the teeth with the closing down of the meat packing plants, paper mill and sawmill in Isle of Wight County as well as several businesses (trucking companies for instance) dependent on their operations. This happened right before Thanksgiving.

It's also hard to get a good feel for the overall picture because volume was deperessed for several days due to weather delays.

Interestingly, despite the lower overall volume, we had what was, I believe, our heaviest day ever in our building. This was due to the backlog of stuff that had been delayed by the big snowstorm arriving all at once, on what would have already been the heaviest day of the year.

All in all not terribly encouraging, but not quite the disaster some had feared. As an aside, the last two days have been exceedingly hectic, due again to dealing with the backlog of weather delays

Almost Fixed
There are a  couple of issues to deal with yet but the blog seems to be running almost normally. The rest is just tweaking.

Now I'm off to work.

UPDATE: All seems fixed and back to normal now. To drive that fact home, the third comment after we got up and running was shoe sales spam.
YAY NORMALCY!

Amazing, and glad to have you back.

I had wanted to ask you about the Christmas rush. A lot of people like to measure the success of any given year's Christmas shopping season by how much brick-and-mortar stores sell, but these days mail order is increasingly part of it, and that means you guys and Fedex.

So I was wondering how busy December felt for you? (I know UPS has had some layoffs.) 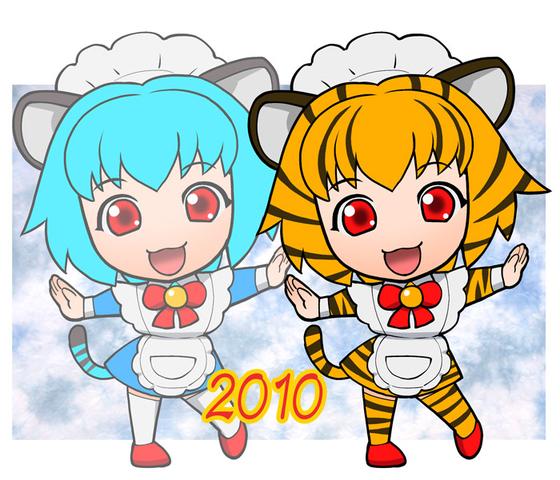 Art by Ueyama Michirou
Yeah...I know, year of the Tiger....but it's my birthday so there!