The End My graduation plans were an intricate Jenga game of prerequisites. Graduating next summer would have required several things to break my way, most notably having the required courses available, and of course, money is always an issue. Of course the whole pile of blocks could have been knocked over by an illness, loss of employment...... 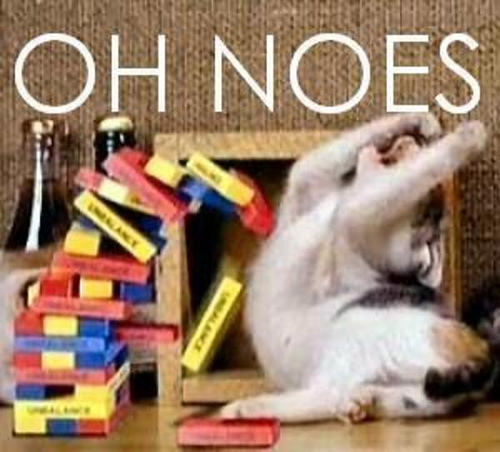 OK its a civic duty and honestly how bad can it be? I'll be on call, what, a month? + trial time if I am selected to sit on a trial?

Try Two Years....
WTF!!1!??
I've never HEARD of such a thing. According to my summons: from January 2012 through December 2013 I am on call by the United States District Court of the Eastern District of Virginia. For 2 years I have to report to the courthouse 3 days a month and can be called up for jury duty, which, unless it's a really short trial, will realistically will cause me to drop out of school again...

I can't leave the country obviously, so going to Japan to get the teaching job  I would have been able to get if I'd still be graduating in August or December of next year is right out.

All plans, all dreams derailed. The end.

Take a look at the paperwork they gave you. A -lot- of jury summons include an exemption or at least an offer of postponement for students. See what hoop they need you to jump through for that, then do it; that takes care of it for a while, at which point they'll usually have forgotten about it.

Then just go to Japan if you like. One of the requirements of compulsory juror service is residence in the area, right? If you're moving out of the country, well, you won't be a resident and can't be compelled to do jury duty (in that jurisdiction, anyway, and it's not like you're moving TO any other US jurisdiction, at least until you get back!)

Do you have the paperwork they sent you? It should mention student exemptions.

2 Yes, check for exemptions.  I'm not sure exactly how it works in the US, but they can't possibly expect you to put your life on hold for two years.

3 Echoed.  I know in Texas (considering I'm looking at MY OWN jury summons right now) active students are automatically exempt.  You just check the box and mail the form back.
Of course, this is Texas, where "justice" is a very loosely defined concept.
As far as non-Texans know.
Which is how we like it.

It's not the same courtroom stuff as a regular jury. You're generally just checking prosecutors' work, making sure that they've got enough of a case put together before they actually charge someone. Specifically, you can be absent from it occasionally without inconveniencing everyone; so long as 16 people out of the two dozen or so are there, they can still do business. So if you've got a vacation or a week at work you just can't miss, you can deal. And there's no such thing as being "called up for a trial" - totally different kind of jury service, so you're not going to be waiting around to see if there's a trial.

But check for the student exemption first. I know it's not consistent state to state, for all that it's a federal grand jury; the districts run their stuff differently. And even if there's not an exemption, you can ask for a deferral until you've completed your studies.

5 The first time I was summoned to jury duty, I was scheduled to show up at the courthouse at the exact same time I was to board a plane for Seattle.  I called them and explained my situation; they were happy to reschedule me.

Of course, they sent me another summons to report three months later... for the second week of December.  This time, they were a less happy to reschedule me.  I explained that I was working retail in the biggest mall in the area and we were somewhat busy at that time.  No dice, they still weren't willing to do it.  Fortunately, I had just sold a computer to one of the sitting judges a couple of weeks earlier.  I mentioned his name and asked them to talk to him for proof of my bona fides.  An hour later, they called back and said that they'd reschedule me for some time in January.

I think they put a black mark in my logbook, though, because I've been summoned for jury duty five times since then.  I'm assuming that I'll get another one in a few months.

6 I've been told at school that It is not likely to get a waiver for students. Still, I'm going to try. I wouldn't mind jury duty if it weren't for the very tight school schedule.

If its a grand jury, I ought to be able to work around it,  do my civic duty and not suffer academically. However, the summons mentions both federal grand and petit juries. If it's the latter I'm screwed. OTOH...I'm not at all petite.