On The Importance of not Becoming the Monsters One is Fighting First let me say that I condemn and disavow those who stupidly decided yesterday to get in touch with their inner Antifatard and charge the Capitol building.
This was stupid.
This was foul.
This was wrong.
The purpose of the exercise is to oppose the left, not BE the left.
These idiots  are jus as bad as Antifa, BLM and all the other thugs we suffered from last year.
And that is an important component of trying to understand how we got here.
( Note to the linguistically impaired: Understanding is not endorsing, or defending. These actions are indefensible.)
For some time people have had the following explained to them in the most sanctimonious and arrogant way possible. 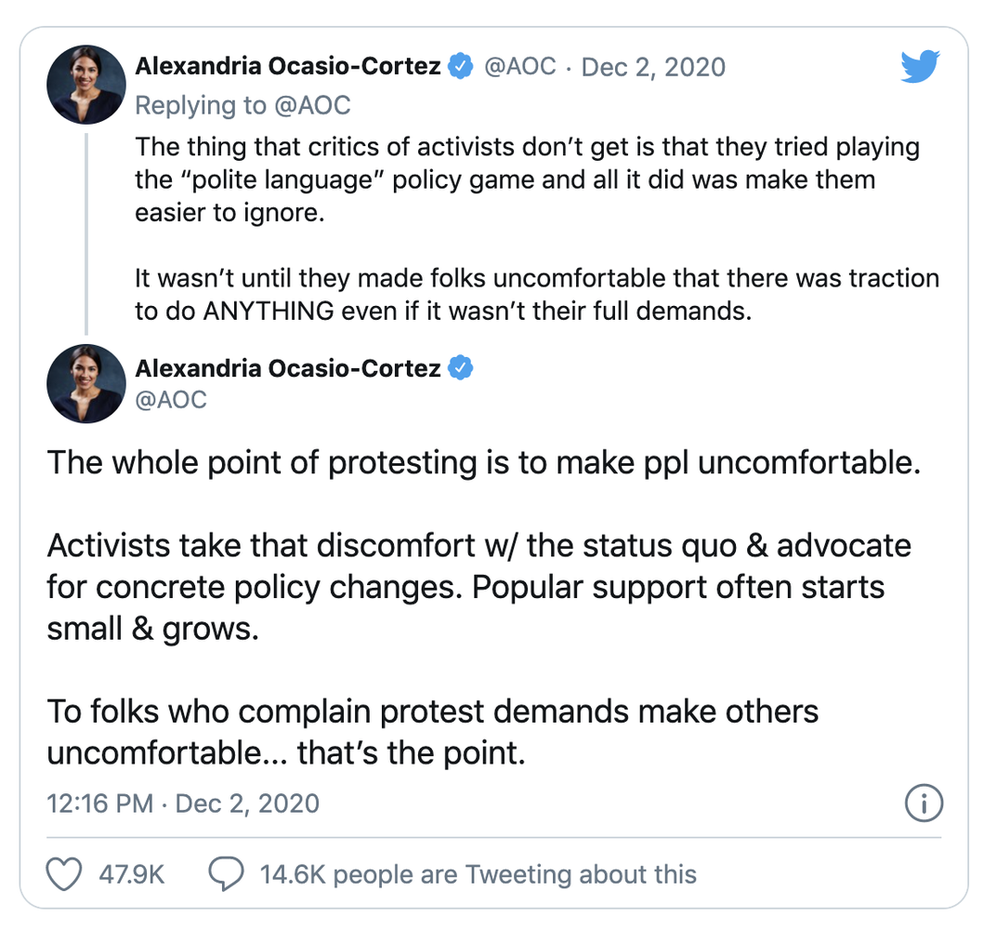 And anyone who disagreed was called everything but a child of God.
None of this excuses the vile shit that went down at the Capitol yesterday, but it does put it into context.
I and many other conservatives are denouncing these fuckwits in exactly the same way we denounced the riots of last summer... and while it's good to FINALLY  have a bipartisan denunciation of political violence, in stark contrast to the previous situation, if AOC and her co-religionists can't disavow their previous statements in favor of insurrectionists, they only make the problem worse.
Because the message that the riots, and the election sent is that only those who violently protest will be taken seriously.
Trump is a carnival barker and a narcisist. But Trump did not do this. He sure as fuck could have chosen his words better, but he did not start this riot. The rioters are people, with agency, and they chose to be little shits.
Furthermore, the left has spent a year normalizing political violence.
This does not excuse the vile actions that took place yesterday. It makes them even more reprehensible, because those stupid actions served to malign the hundreds of thousands of protestors who were there to peacefully protest and it deprives the public at large of any hope that either side denounces violence.
I have seen it noted on other blogs that this wasn't any different from the many times that lefty loons broke into the Capitol during hearings, votes or state of the union speeches except that the capitol police did not shoot any of those protestors to death....
Outside the Supreme Court 2018
...which almost seems like a fair point until you realize that our side is the one that is supposed to stand against this darkness. Another fact frequently noted is that aside from the broken windows, this was a remarkably sedate riot, with little looting or burning, and while that is, indeed true, the riot was still a damned RIOT. Furthermore, the sacred nature of the venue rather negates that argument.
There is one big caveat however.
This is not a defense of this indefensible action but a fact and a warning.
If riots are the rules by which the political game is to be played going forward, both sides are eventually going to follow those rules. The only thing that had kept conservatives from responding in kind ( Instead famously leaving protest areas cleaner than when they showed up) was a faith that the system could work for them, the bourgeoisie values that were the key to their standard of living and a sense of civics. All of these have been under constant attack, especially in schools to the point that the younger generations are starting to see those cultural checks as indicators of gullibility.
This is a dangerous place we are in, and if the nation goes over the precipice, a fair amount of the blood spilled will be on the hands of those who acted so stupidly yesterday. And on those who have unimaginable cultural influence and   have so normalized this sort of behavior when it was their allies doing it.

I never thought I would live to see the day the Cultural Revolution came to the US.  I had hope that it would stay as a bad memory for people I know who saw it.