Missing The Most Obvious Explanation A history buff on Reddit asked an art history question, which stumped some historians and led to further research and a number of theories, none of which confront the most reasonable and simple explanation. 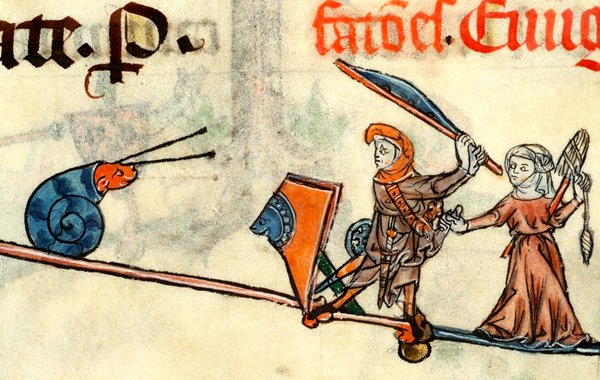 "DAMN the GM! This random encounter table SUCKS!"
Obviously Europe was invaded in the late 13th century by an force of predatory and possibly sentient giant snails that terrorized the local population and were individually a match for even an armored knight.
The Snail of Caerbannog?
As is documented below, these vile beasts would drop on people out of trees.
"Tree-Snail! TREE-SNAI..."
The historians at the linked article have a number of alternative explanations for the art, none of which are supported by the...you know...actual art which clearly show a number of enormous, deadly...
...cat eating...
...snails terrorizing the people of France and Flanders in the 1290s. Furthermore, none of their explanations, would make nearly as awesome a movie or (gruesome late night anime) as the obvious evidence presented by the medieval artists.
This is a production that NEEDS to be made. This little known heroic stand against an implacable enemy could be as consequential to the development of western civilization as Charles Martel at Tours. After all, if Europe had been overrun and its inhabitants eaten by giant snails in the 1290's, history would have taken a very different course.
I doubt any serious historian would disagree with that last sentence.
So we need to find out two things.
1: How did the people of France and Flanders vanquish these beasts?
2: What filmaker can we get to document this? This little known story has the potential to be an unbelievably awesome period piece with monsters and swordsmen and the eras' handful of early cannon that justify spectacular explosions ! It'll be The Beast the Challenged the World meets the Lion in Winter!
WHY is this not being made?

1 How did the French conquer the snails? Garlic and butter, of course.

2 Ah yes, the legendary Snail thread.  The original is here, by the way.  Until recently, it was the second-most upvoted question on the AskHistorians subreddit.

It couldn't quite dethrone the important and burning question: How did the Eagles manage to rescue Frodo and Sam at Mt Doom and still have time to record Hotel California?

3 Weren't the snails around even in Roman times? The legionnaires weren't issued salt as pay - it was part of their munitions!

4 The important thing to remember about medieval books is that they were not just meant to store and deliver info. They were meant to help you memorize it and store it in your "memory palace." And that was all about using location memory and mental images. The more startling the image, the better. Often images were pictures of bad puns or wordplay. (And often the text was Latin, but the pun or rebus was in the vernacular.)
So if an illuminated book has drawings, they are almost always memory aids. Marginalia are usually designed to draw reader attention to a specific point that most people will want to create an image for. At first, that meant a lot of pointer fingers. But later, you get artists including a helpful memory image for you to use.
The problem is that these images seemed obviously helpful to their creators and users, but they are not so obvious in meaning to us. Also, it is not always clear which bits refer to text memorization, and which bits are just meant to make the image startling and hence memorable. We are left trying to explain jokes that would have seemed very basic to a medieval reader.
The snails are great examples of such memory helps. But the question is why and how they were used. And since they show up in various contexts, clearly they were a thing in medieval pop culture, as well as a memory image.

The "ars memoriae" (art of memory) was the process of creating an imaginary place (usually an image of a real and complicated place you knew well, like your house, a cathedral, a local woods, etc.). Then you put memory images, tied to stuff you wanted to remember, into specific areas of your imaginary place. (Thus bringing in the power of location memory, which allows you to remember where thousands of things are.) More advanced users would do stuff like organize whole mental bookcases full of stuff they wanted to remember, organized by topic and such. It was important to go over your mental storage every once in a while, so that you didn't forget your storage or what the images stood for, but many people maintained memory palaces over the course of a lifetime.

This would allow you to do stuff like keep your speech notes in your head, or quote big swatches of the Bible from memory, or organize facts and quotes by topic and keep them in your memory to be able to speak from them at will. (Very helpful in a world where you might only be able to borrow a book once in your life.)

Today, the ars memoriae is used mostly by card-counters or people with big memories for names and faces. But it is interesting to play with, because most of us do have a lot of location memory capabilities that are going begging. It is also good for folks with strong visual memory and imaging capabilities, or for developing those abilities a bit more.

6 Anyway... the classical authorities and the medieval ones all agreed that freaky images were the easiest to remember. Murder scenes, naked people, naked people doing murder, or crazy ideas that made you laugh -- all good for memory images.

This does not necessarily mean that giant snails did not exist, of course.