I HAVE A CRAZY THEORY This is my crazy theory.
There are many crazy theories, but this one is mine!
The Democrats are about to nominate a singularly repulsive candidate for president. Hillary Clinton is a fractally-corrupt-Mandelbrot -Set of malfeasance, who has seriously endangered the country and even if one ignores the venal corruption the sheer incompetence of her tenure as America's Chief foreign policy officer caused untold suffering in North Africa, the Middle East and now Europe by destabilizing the area and creating a refugee crisis and this doesn't even get into the  general weakening of the international order that happened on her watch.  She's also a petty, abusive and singularly unlikeable politician, which begs the question....wHY did the democrats go all in for her.
Well, my theory is that their reasoning was along the lines of "BWAHAHAHAHA!!!! Those republicans will NEVER be able to lose to us now!" (dancity dancity dancity dance).
Which dovetails into the rest of my theory...that the Republicans did not take this lying down.  The establishment kept multiple of their favored sons in the race to split the vote, ensuring that Trump would get the nod. Remember above, when I said that Hillary was SINGULARLY repulsive?
Well....perhaps dually is a better word....if it's a word.
Trump is a corrupt real estate mogul who makes his living off scams and trying to run old ladies off their land to build casinos that go out of business. He has called for US soldiers to commit war crimes and helpfully posited that since he, the president will be telling them to do it it won't be illegal. He has suggested expanding the libel laws to stifle criticism of him, talks openly of defaulting on the debt and our treaty obligations. He's also a jerk, and exhibits Obama's petty vindictiveness turned up to 11. 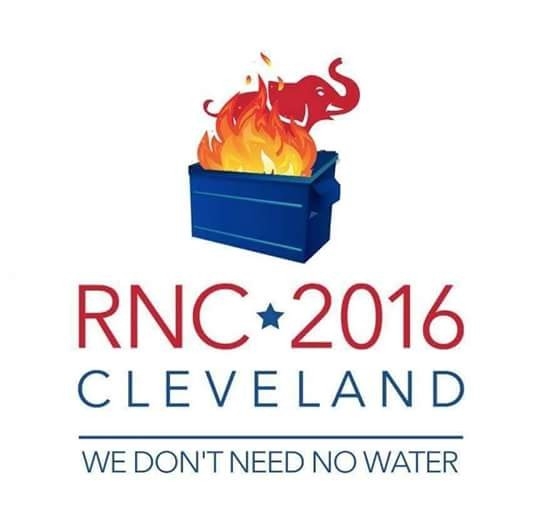 Image via Dame Tam of Slick
One possible explanation for this is that the Republican Party hacks are sitting in a Potpourri filled room congratulating themselves and saying things like "Those Democrat bastards, don't stand a chance. They'll never loose to this asshole!"...and yet they might.
Why the inversion this year?
Well that is the crux of my crazy theory.
Neither side actually WANTS to win, because neither side wants to be in the White House during the next four years. They do not want to be the ones tasked with the Sisyphean and possibly impossible task of dealing with the fire breathing hydra with rabies that is the deteriorating world situation. Their best case scenario is to loose, and in the unlikely event there are any survivors, come out of their bunkers and pick up the pieces, while blaming the other party for the catastrophe that they fortuitously dodged having to deal with.
I base my crazy theory in part upon the following:
We don't see it as much here, but the Europeans, especially those closest to Russia are openly talking about war as inevitable.

At the office I ask a Russian employee about the mood in his working-class Moscow neighborhood. The old people are buying salt, matches and "gretchka,â€ (buckwheat) he tells me - the time-worn refuge for Russians stocking up on essentials in case of war.
In the past two months, Iâ€™ve traveled to the Baltic region, to Georgia, and to Russia. Talk of war is everywhere.

There does seem to be a consensus that the Baltics are a very likely place for things to go pear shaped.

...the possibility of nuclear war between America and Russia not only still exists, but is probably growing.  And the place where it is most likely to begin is in a future military confrontation over three small Baltic states -- Estonia, Latvia and Lithuania.

But fear not! There's always Moldova.
Meanwhile, the U.S.A.F. is having to canibalize planes to keep some in the air.
Tensions, between India and China are re-escalating both are nuclear powers, and of course, Pakistan, also nuclear capable, building lots of tactical nukes, and rather crazy to boot can be counted on to pounce upon India in any existential crisis.
China is, elsewhere acting an awful lot like Japan did in the 1930s.
And all those "little" nukes in Pakistan...well the Venn diagram between those and Al-Quaeda or ISIS has considerable overlap.
While all that is going on we find out that the Russian's aparrantly bombed a U.S airbase...last month.
Do note that Brickmuppet Blog is not alone in worrying about the nukes in Turkey given that the country's coup may have been a false flag operation and in any event is likely to bring about an Islamic dictatorship in a NATO member.
The economy is not looking particularly good either.
We'll refrain from discussing domestic racial, social and infrastructure issues, as we are already in teal deer territory.
But, there is this....scarcely worth mentioning.

The US national security industry is planning for the impact of an unprecedented global food crisis lasting as long as a decade, according to reports by a government contractor.
The studies published by CNA Corporation in December 2015, unreported until now, describe a detailed simulation of a protracted global food crisis from 2020 to 2030

Take heart though.
Remember, this is a CRAZY theory.
The crazy part is the assumption of sufficient competence and foresight in our leaders that they would anticipate a coming crisis. So don't go all to pieces over my crazy theory.
Like the girl says... 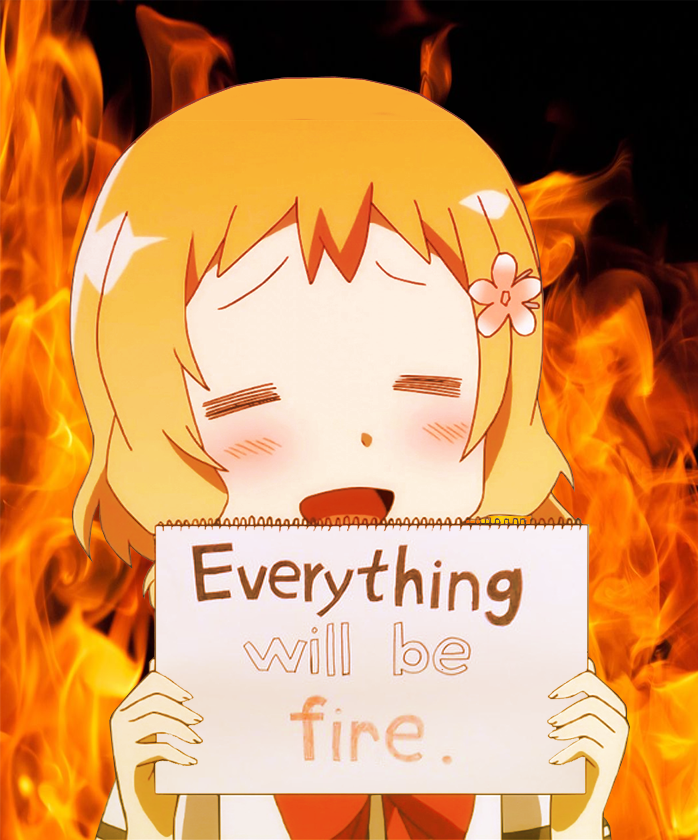 1 The long list of litany woe, and my reaction is "yep, we're doomed."  But what makes me twitch reading this is "loose" when you meant "lose" twice.  Not sure what that says about me....

2 That Itsuki is adorable.

But what makes me twitch reading this is "loose" when you meant "lose" twice.  Not sure what that says about me....


It says that you are a man of letters fighting a valiant battle to preserve our language and culture.

Also, while there is no indication that it is actually responsible for the noted typos, I've decided to assign blame for the errors on spell check.