I...Oh Dear. This has to be one of the most sublime juxtapositions of win and derp, ever. 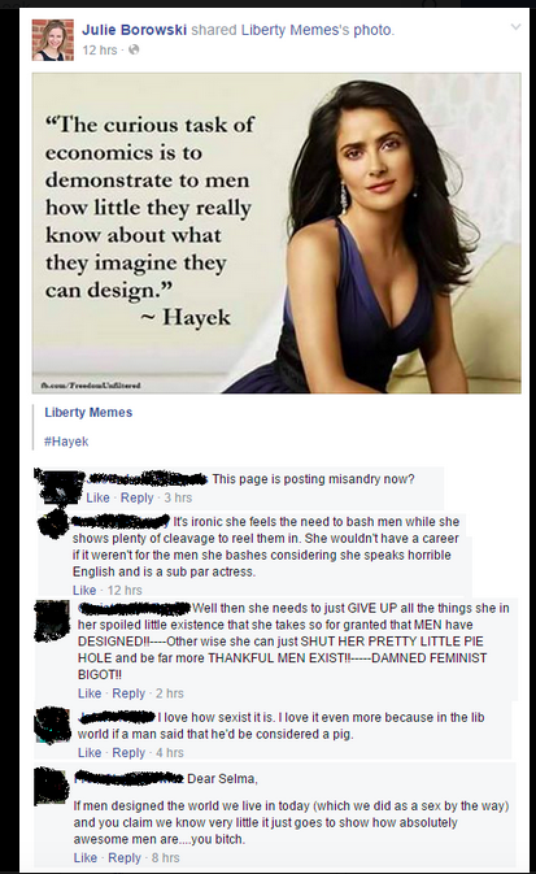 Via
I think we now have evidence that at a nontrivial percentage of the hateful comments that show up on some right leaning sites are indeed Mobys.
...'cause if you pick five righties (at least the ones that READ right leaning websites) there are surely good odds that two if not more of them would get the joke.

It's kind of sad that so many people don't know that there's another Hayek...

I can't claim to have read anything of his, but I am at least aware of his existence and have at least a passing understanding of what he stood for.

2 What makes you think they're mobys rather than bog-standard men's rights dudebros?  Who aren't exactly what you'd call "conservative", they tend to be "greys" outside of the typical blue/red tribal dividing lines, and politically low-information & ignorant.
I had a low-information left-leaning friend throw this one at me yesterday afternoon, so it's making the rounds on both sides of the divide, and definitely being used against conservatives, but then, most "men's rights" dudebro nonsense gets used that way so, sigh, oh, well.
That quote is pretty much the nut graf of Hayek's philosophy, and the properly educated should be able to identify it... the left-leaning friend approved of the sentiment despite not knowing anything about Hayek more than whatever he remembered from what I talked about in his presence back when I was reading The Fatal Conceit a few years ago.

3 i have no problem with the notion that DBs might drop a bit on this, dropping a bit from time to time is in their nature,  but 5 out of 5 is straining credulity given that the facebook page is all about free markets. Again, people who read those sorts blogs are much more likely than the general public to know who F.J.Hayek was.
Now, let me be clear that the notion that every malignant asshat tangentially aligned with the right is a false flag operation is its own kind of stupid. This is a  manifestation of the no true Scotsman fallacy and that can lead to its own stupidity and counterproductive outcomes.  If one thinks that these people are all Mobys because no one one knows holds those conclusions then one is having a Pauline Kael moment.
However, the fact remains that this species of paranoia is caused by the fact that false flag/concern troll/ Moby/ type stuff DOES go on. It's a basic Alinskyite tactic and ignoring it is not the path to wisdom either.

4 My reaction was simpler: "who honestly believes that Salma Hayek talks like that?"

5 I would consider the first two comments, or at least the first one, a bit different from the last three, because they don't attack her (bitch, bigot) with the same bile. The first comment is almost reasonable, if you didn't know the joke.

6 I had no idea who Friedrich A Hayek was, and other than reading the opening paragraph of his wikipedia page, I still don't.

For some reason, I don't feel much of a lack... and I'm far from being a "dudebro", other than being a sports fan.

7 I had no idea who Selma Hayek was. F.H. I knew from my economics classes. My comparative economics professor thought very highly of him (granted, that was basically a class of why communism sucked and why the suck was unavoidable, heh.)

and I'm far from being a "dudebro"

9 If you want a TL;DR version of Hayek and his relevance to popular topics...before "Epic Rap Battles of History" was a big thing (I think) the YouTube channel "EconStories" did Fear the Boom and Bust:  A Hayek vs. Keynes Rap Anthem and Fight of the Century: Keynes vs. Hayek Round 2.
They're pretty awesome.