Earnestly Paving The Road to Hell Magical girl shows:
Someone has given ENTIRELY too much thought to the concept. 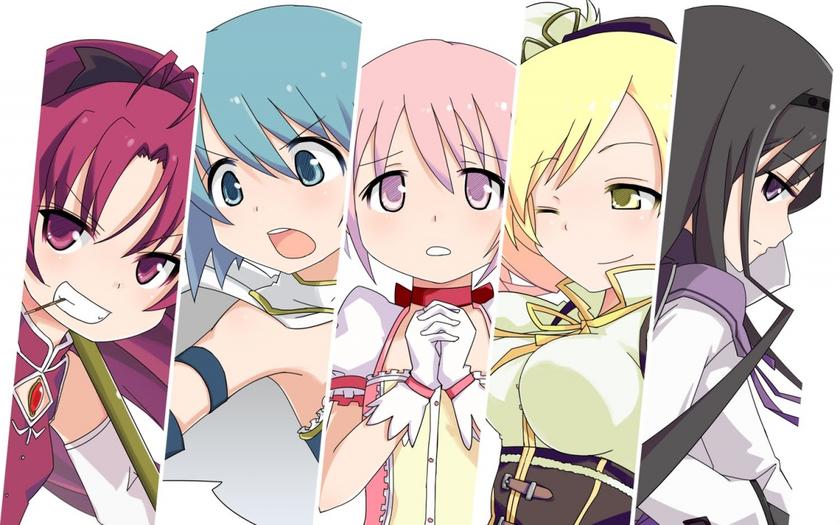 I'd long heard that Puella Magi Madoka Magica was good.
But...
It's a magical girl show
I'm 42.
I'm a dude.
To say I have little interest in the genre is an understatement. It was, therefore, rather far down on my to watch list.

I was particularly afraid that it was going to be a creepy underage cheesecake vehicle.

It's not. It's creepy in an entirely different way! Six episodes in I'm finding this to be an an intelligent, albeit rather disturbing show that raises a lot of questions. Those include hard questions about ethics as well as questions about who the HELL the target audience is.

The character designs and animation are nothing to write home about but the art direction and writing is really inspired. Set in the near future (as envisioned by Corning it would seem) the backgrounds are gorgeous and imaginative. This contrasts jarringly with moments of frightening  otherworldlieness that come off as downright Lovecraftian.

The story is excellent thus far and is consistently surprising. This show has quite important things to say....Be advised though, it goes to some very dark places.

I'm hoping against hope that they can keep this up for the last half of the show. At the midway point I'm inclined to recommend it highly.

...The first half had been well above average, The second half surpasses that handily.

I have rarely seen in any medium anything approaching the callous malevolence that is portrayed in this shows antagonist. 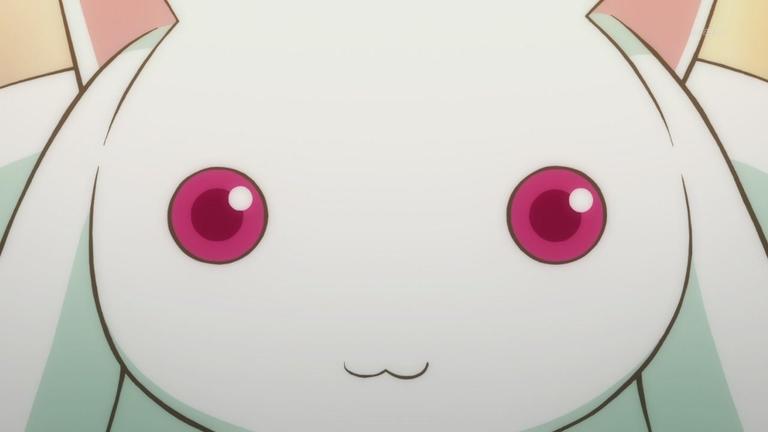 Good LORD.
The wickedness of this monster is mind boggling.
Puella Magi Madoka Magica is an astoundingly well executed and brilliantly paced drama with which uses its 12 episodes to drive home a vital and timeless message.

Despair is a sin.

1 There is actually an in-story reason why the architecture is strange, and it can be stretched to explain why the character designs are so funky.

2 Can you elaborate on that, Steven, or is it tied up in spoilers?  I've seen the show, but I can't say I remember anything explicit which might explain the high-tech, ultra-Bauhaus futurism of the architecture.  Aside from "it's the near-future, and Japan".   If anything, I find the glass-birdhouse architecture creepier than the witches' labyrinths.  Especially that whitened-sepulcher ziggurat of a rooftop that Kyubey uses for his please-become-a-magical-girl seduction scenes.

3 Never send to know for whom the show is targeted...

Well, it's a huge spoiler. Brickmuppet, don't read this until you've finished the show.

The world as it is in this show is the cumulative result of the wishes of many magical girls over millenia. Most of the wishes made by magical girls were local or otherwise inconsequential, but some of them changed the course of history, helping to advance the human race technologically or culturally.

But because it was girls making those wishes, the resulting path isn't really what you would expect without that interference. So the architecture is a lot different, because it's the result of what some girls wished for.

And this has been happening for so long, in so many ways, that essentially everything has been changed. That's why things like the character designs look unreal: they are unreal. It's a consensus fantasy created by magical girls over the centuries.

5 Wow Steven, that's an aspect I hadn't even considered when I watched it recently.  I merely accepted it as "Modern Near Future architecture".

All I can say to Brickmuppet is "Stick with it, it gets even more awesome."  It turns the entire genre on its head.

6 After you watch the tenth episode, imagine what it was like for us to have to wait six weeks for the conclusion.

7 What Don is referring to is that broadcast of the final two episodes was delayed by the tsunami.

Never send to know for whom the show is targeted...

10 RE: Steven in comments 1 and 4.
Yes. That was subtle and it does follow perfectly. I'm not sure I'd extend to to the character designs though.

1: I generally HAET time travel cop outs but Honami's  Groundhog Day gambit completely worked and tied everything together. Given the concentration of timelines evident in Madoka I'm not sure why she was not superpowerful at the end too.
2: What the hell Sayaka?
3: Strict Utilitarianism is a surer path to hell than the good intentions it twists to its own ends.

11 Oh wait...
Honami doesn't develop any real ranged attacks aside from firearms and light artillery so they would not improve. Also the time travel ability seems to improve over time so that explains that.

12 Muppet, since I couldn't seem to answer the text you sent me Friday evening:

Yes, this is SHAFT being its SHAFTiest.

Sorta loses its punch now that you've seen the whole thing, but there you go.

No show is an island, entire of itself; every one is a piece of the medium, a part of the main. If an episode be washed away by the censors, Anime is the less, as well as if a season were, as well as if a DVD of thy friend's or of thine own were: any show's cancellation diminishes me, because I am involved in otakudom, and therefore never send to know for whom the show is targeted; it is targeted for thee.

16 This article was the tipping point, off to Baka BT I went...

...ok, yeah, that was creepy.  I suspect my daughter is going to love this.

You know, it's streaming on Crunchy Roll.