Compare and Contrast We mentioned yesterday that it looks like the Chinese may be putting their nuclear force on hair-trigger alert.

According to a report by the Union of Concerned Scientists, Beijing is considering a small but scary change to the way it stores its nuclear weapons. China may be reversing its decades-old nuclear policy and putting its nuclear weapons on permanent high alert. This would make China's nuclear deterrent more credible, but also heighten the possibility of accidental nuclear war.

The full report from the Union of Concerned Scientists is here. As is typical for them their suggestions all involve the U.S. coming off of a strike on warning status. Of course they also think that GMO foods should be banned so take their suggestions with a grain of (iodized) salt.
What is clear, is that China is engaged in a massive modernization of its nuclear forces. Little in the way of specifics is available, but this excerpt of a report from last year gives a good idea of what's in the works. Note that we have NO arms control treaties with China and no joint inspection agreements unlike those we have with Russia, so there is a LOT of room for surprises, particularly on numbers of warheads.
Meanwhile in the U.S.A. It is unclear if this is the hope or the change, but it does seem consequential whichever it might be.

The Minuteman 3 is about 50 percent less accurate than the less old Peacekeeper missiles which were retired some years ago. The minuteman originally compensated for this by having a 1.2 MEGATON warhead. This was, later supplemented by other missiles with 3 smaller warheads, first the W-62, then the W-78. All the Minuteman missiles with the single Big warhead were retired some years ago and when the Peacekeeper missiles were retired, their mid yield warheads (the fairly modern and much safer W-87) were transferred to the much older Minuteman missiles.
However. The Minuteman missiles were reduced from 3 warheads to 1 each so that they now have about a third the yield of the original Minuteman 1 (and obviously a third the yield they had before the "upgrade"). More significantly, they were supposed to be retrofitted with the much more accurate guidance package of the Peacekeeper missile to compensate for this. However, the Obama administration nixed this along wth several other upgrades to the nuclear arsenal. Thus the ability of these smaller and fewer warheads to deal decisively with a large nation's military is significantly reduced. This is because that while nuclear warheads are very powerful, they still require precise placement to take out a hardened bunker or missile silo, this is especially true with the much fewer and smaller warheads currently deployed.
It gets worse:

Ironically, Carter and the nation's commander in chief, President Obama, may be unaware that the U.S. arsenal cannot actually accomplish what's enshrined in the nuclear-contingency blueprints they've approved, according to defense sources. The promise of greater accuracy for the land-based missiles reportedly helped lay the groundwork for reductions in the 2011 New START agreement between Washington and Moscow, and many have assumed the precision now exists.
It's conceivable, strangely enough, that the Kremlin has already taken stock of the U.S. targeting deficiency. Considerable data about the capabilities of U.S. Air Force and Navy ballistic missiles can be found in open sources and online.

I suspect that neither the word "Ironically", nor the phrase "strangely enough" is being used properly in that quote.
Note that one of the many hurdles to rectifying this is fears of civil service job security.

But the ICBM program headquarters at Hill Air Force Base, Utah, also stands to lose jobs and clout if the advanced accuracy technology is adopted. Repair personnel based at Hill keep busy maintaining the old Minuteman 3 mechanical guidance units, which break down once every three years on average.
By contrast, solid state uses fewer moving parts and can run for 20 years between breakdowns, according to Air Force Research Laboratory data.

Oh...what EVER would we do with a reliable deterrent that didn't break down every three years? Perhaps not reducing our 400 single warhead missiles to...less at any given time.
Of course, it is possible that the old '60s era guidance system is less prone to EMP and hacking and doesn't use the GPS  satellites that would be knocked out swiftly in any nuclear attack, so perhaps commercial off the shelf upgrades are not actually the panacea that the article suggests. The blue-screen of ATOMIC death should be limited to Cherenkov radiation on a CCTV.
An extensive overview of hypothesized scenarios and effects involved in a China-U.S. Nuclear exchange can be found here. Note that this study is from a few years ago and does not take into recent Chinese developments and assumes that the U.S. actually upgraded the Minuteman guidance to render it effective against hardened targets. 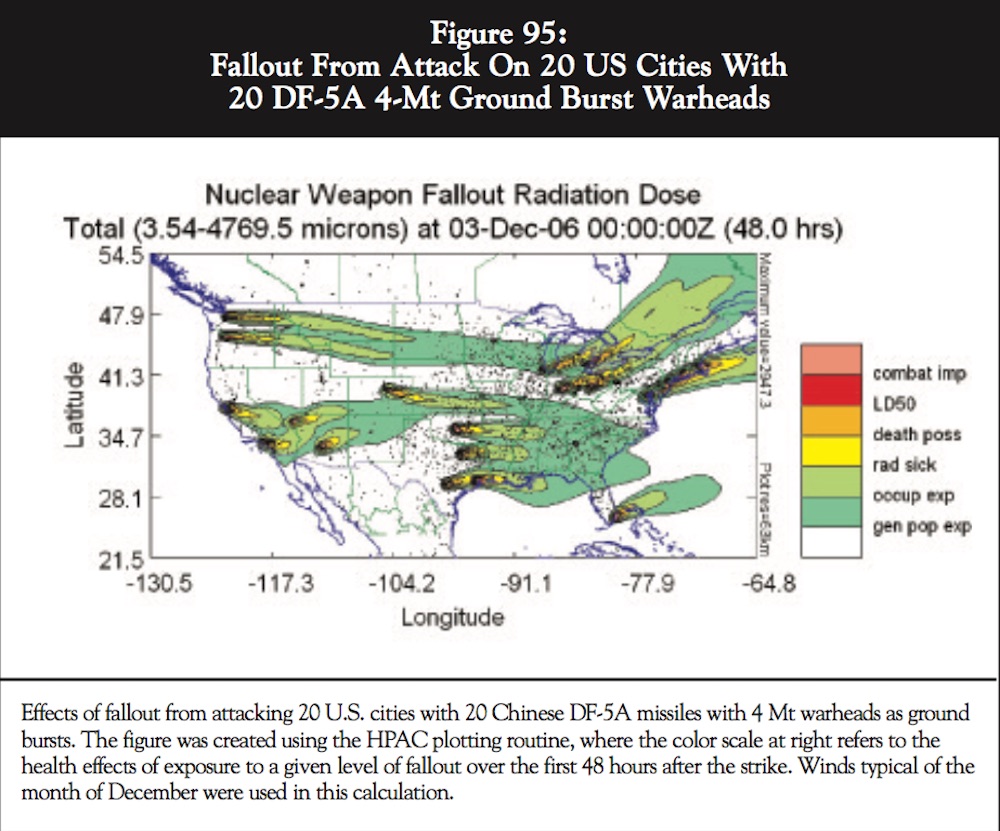 The calculus in these matters for a totalitarian dictatorship or oligarchy is vastly different than a representative republic. The possibility that a large nation which places a low value on human life might think that they can "take the hit" and deal a death blow to an adversary should not be ignored, especially since the vastly reduced numbers of active nukes in the world mean that a nuclear war today would not be a global extinction event. This, ironically could increase the possibility of these terrible weapons use. As such our deterrent should be as robust and credible as possible.


UPDATE: And in other nuclear news...

1 The so-called "Union of Concerned Scientists" doesn't have many scientists in its membership. Anyone can join. It's pretty much a far-left-wing mushbrain organization and I personally don't take anything they say very seriously.