Big Bomb is Big, but The Tautology is Not the Story The news today has been abuzz with reports that the U.S.A.F. dropped a GBU-43/b bomb on an I.S.I.S tunnel network in Afganistan. Much of the reporting has been breatlessly reporting on the fact that this bomb is REALLY BIG. Some reports have implied that this is like nothing ever used before and is as big as a small nuke.
No.
The bomb in question is about the same sizer as a British Grand Slam bombs used in WW2.
This bomb has a much higher percentage of explosive to its total weight but its not anywhere near even the smallest nuke.
A Kiloton is the explosive equivalent to one kiloton (that is one thousand TONS) of TNT. This can be chamically simulated (minus flash and radiation) with....one thousand tons of TNT.
Which brings us to Operation Sailor Hat... 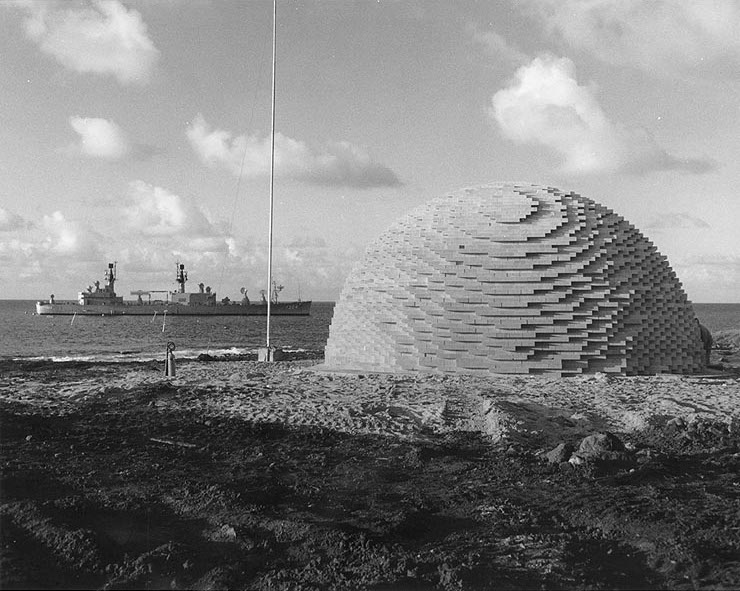 ...in which the U.S. Navy wanted to test the effects of nuclear blasts on its ships without actually popping a nuke. They stacked up a pile of explosives big enough to simulate one half a kiloton of TNT, that is, one 30th the yield of the Hiroshima bomb. Naturally, this assembly consisted of a detonator and 500 TONS of TNT. Note the sailor in the lower right hand corner for scale (and the fire extinguisher...'cause they REALLY didn't want a fire there.)
Here's the GBU-43/b. 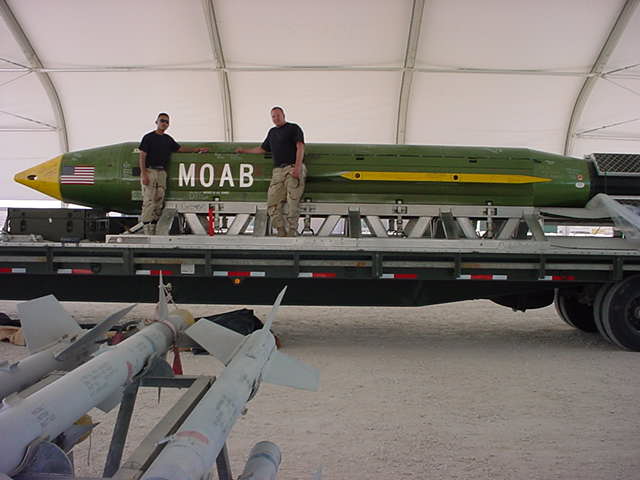 Much smaller than the bungalow sized bundle of boom above
It's also called MOAB (Massive Ordinance Air Burst) which is a somewhat tortured application of the G.I. Joe system of acronyms that enables it to be unofficially referred to as the Mother of All Bombs.
It is NOT in the same ballpark as even the smallest known nuke.
It is a very good weapon for delivering a huge concussive force to a mountain and collapsing tunnels, which is what it was used for here. The target seems to be a massive underground system of tunnels and caves that is part of a chain of such fortresses set up by the Taliban and AlQuaeda in Nangahar province stretching from the northeast to south of Jalalabad of which Tora Bora is the most well known. that complex was well equipped with hydroelectric generators, and other equipment one would associate with the Maginot Line rather than a terrorist cave.
Note though the buried lede in this story.
The operation in Nangahar not only warranted the use of a concussion weapon of this size, the weapon in question was targeted against an ISIS stronghold.
Not Taliban, not Al-Quaeda, but ISIS...in Afganistan. There have been several islamist groups around the world that have sworn aliegence to ISIS, and the their operations in Africa have been known for some time. The scale of the operation in Afganistan, very near the Pakistan border, on the heels of numerous terror attacks inside Pakistan should give everyone pause.
Pakistan is a nuclear power and its arsenal consists mainly of tactical nukes, that while small are multiple orders of magnitude more destructive than the very impressive firecracker we just dropped on a mountain fortress. They also have dubious security.

In the past five years there have been at least half a dozen attacks on the facilities that reportedly store Pakistanâ€™s nuclear weapons. The Kamra Air Base near Islamabad has been attacked three times by terrorists belonging to the Tehreek-e-Taliban Pakistan (TTP).

This bomb strike, or more correctly the battle that it was part of, therefore, may well be consequential indeed. Not so much for what was dropped, but who it was aimed at.
Having ignored it until it got dangerous, it appears that we waited too long to cut the cancer that is ISIS out of Iraq....it seems to have metastasized most alarmingly.

1 Yep.  The Davy Crockett had a minimum yield of around 10t, though that was by deliberately causing an incomplete reaction.   Full yield was around 1kt.