A Blast From the Past ...in the multi megaton range.
Via the Secret Projects Forum comes information indicating the Russians have been developing a weapon system that involves an autonomous underwater drone intended to penetrate U.S. harbors. This is no surprise, but this drone is reportedly intended to carry a warhead with a yield measured in "tens of megatons". This weapon system has been given the designation KANYON by the Pentagon.
It's not exactly a new concept for the Russians. As we've reported here before, the initial delivery system contemplated for the RDS-220 (Tsar Bomba) warhead was a rather large torpedo, the T-15. This was initially intended to be the main armament of the project 627 submarines (November Class), though the concept was later abandoned.
KANYON would appear to be a completely terrifying interesting and logical refinement  of the concept. Though not explicitly stated, it would seem to allow the weapon to situate itself much farther inland than could be reached with a simple torpedo shot.  The article suggests that the weapon is specifically targeted at the U.S. Navy's SSBN bases in Kings Bay and Bremerton, the latter being a particularly challenging targeting problem as it is reachable only through a winding  channel through an archipelago that is fairly far inland. This would indicate that other targets with inland deepwater ports would be within its reach. The junction of the Potomac and Anacostia rivers comes to mind, as does Houston which is a major port and energy center.
This weapon would, of course, precipitate all of the usual mayhem one associates with a high yield nuclear blast (and a ground blast to boot...so fallout would be horrific). However, there is one particularly interesting effect that this sort of unsolicited dredging operation would have.
Cratering.
Assuming use of the relatively new 20 megaton 8F675 warhead which the Russians recently removed from their ICBMs, the Nukemap online sum of all fears simulator suggests a crater depth of 800 feet. More importantly the crater extends for 1.05 km from the center, so there is a circular reef of trinitite glass completely blocking the harbor's channel. Here we see one at the mouth of  Hampton Roads (home to the worlds largest naval base...and the Brickmuppet). 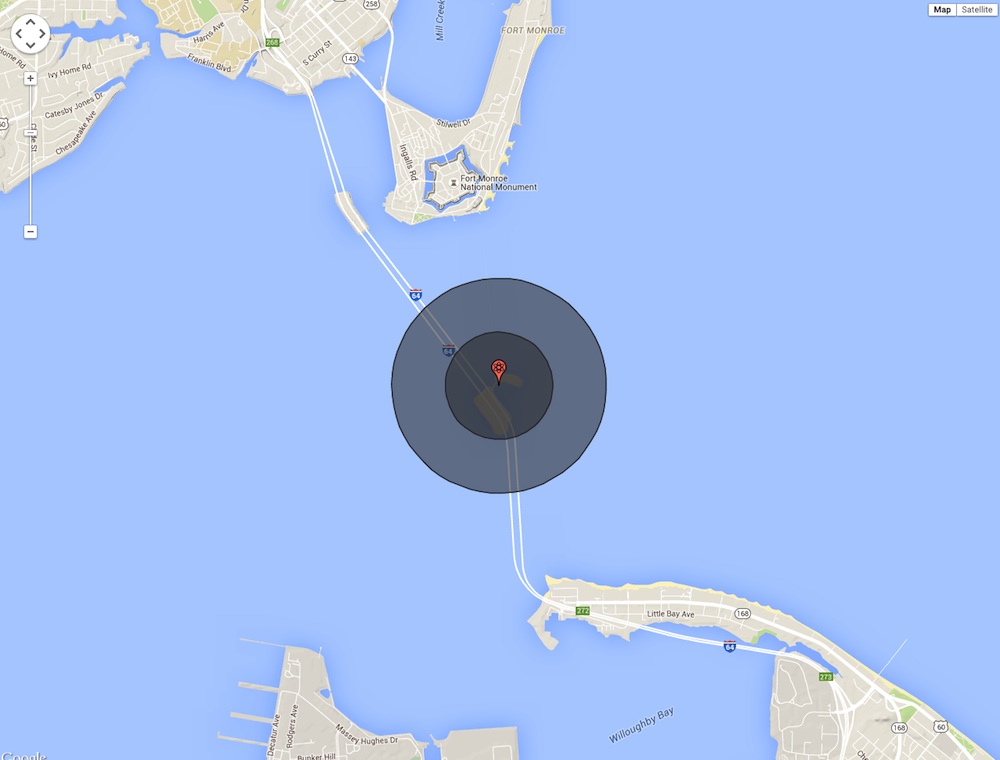 The harbor....isn't one any more. Even after the radioactivity subsides.
The expanse of the effect naturally increases (though less than linearly) with yield, so the 57megaton yield of the 1963 Tsar Bomba test would virtually close the whole harbor mouth. 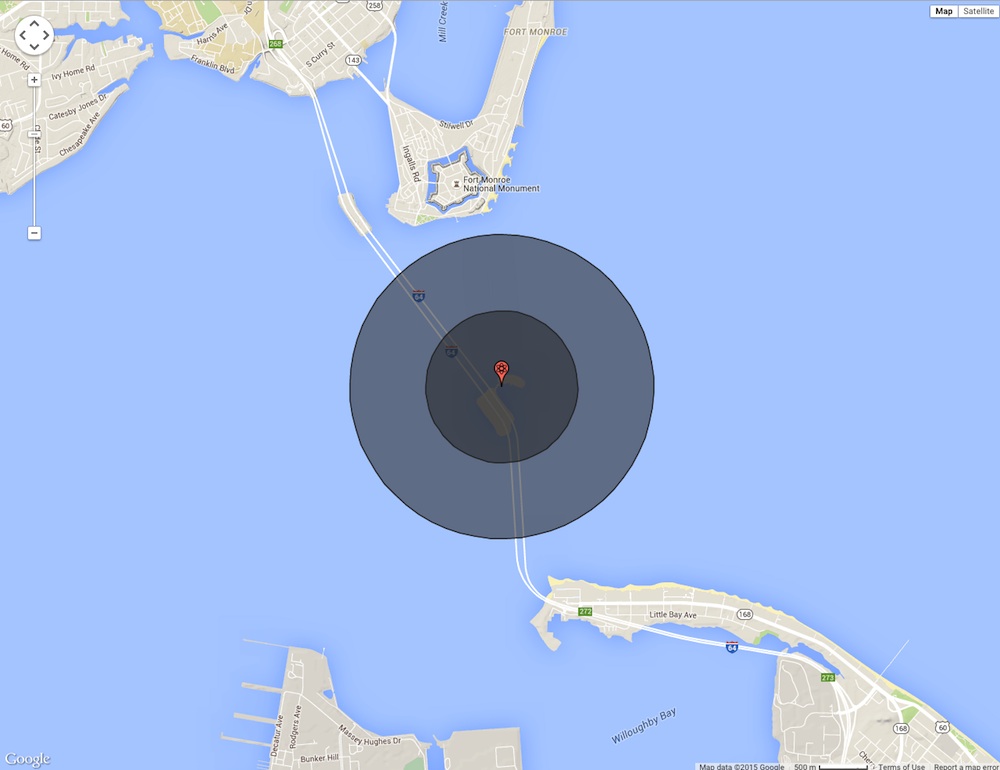 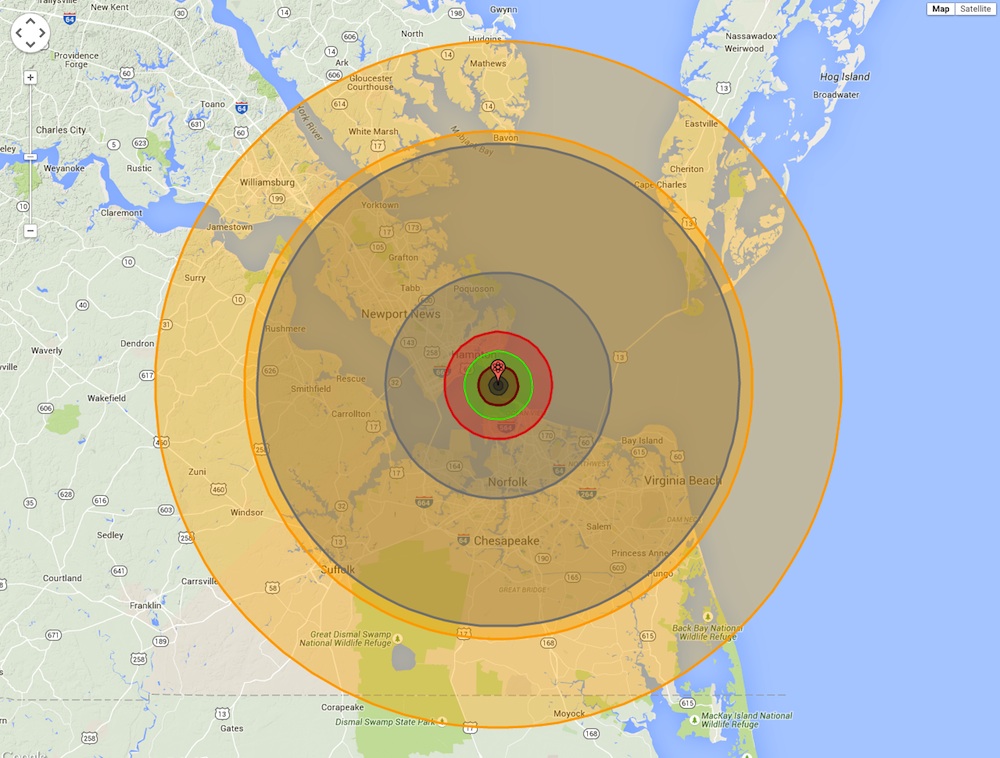 From center out, little black donut=crater seen above, dark red circle=200PSI blast which destroys pretty much everything, green=radiation instant death which is redundant in this context because...light red circle=20PSI which corresponds to ground zero at Hiroshima, dark grey=5psi light grey=windows break with enough force to cause injuries, dark orange=trees burst into flames (weather dependent) light orange=people standing outside get third degree burns (weather dependent) Note that fallout is not shown, but I'd advise against eating the oysters for several decades.
Doing this to Beaumont, Long Beach, South Louisiana, Houston and New York could permanently close those ports and would remove over half of the nations capacity for foreign trade for a very long time. In the case of Louisiana, it would shut down a good bit of internal trade as well.
Of course, such a weapon would violate the Seabed Treaty and we all know how fastidious the Russians currently are about arms-control treaties.
UPDATE: The reason that something as whacked as a multi-megaton robot submarine nuke is is of any interest is that such a device is inherently a first strike weapon. It doesn't actually deter anything unless its deployed and if its deployed it will likely result in the balloon going up. Kanyon is a stupid concept  if one is looking for deterrence rather than destabilization. The Russians aren't stupid. Thus, that a weapon like this is, apparently,  being developed in a country that is rather strapped for cash indicates that this sort of attack is in the rolodex of options that are actually being considered by their war plans division.

3 We would build mulberry harbors, which would not be scenic but would avoid radiation.

"We would build mulberry harbors..."

'Not in my backyard you won't!  And get me some Browns from the Home Depot lot to clean up all this fallout!' - said those dilettantes at the spear's point of murdering WestCiv.

Wait...was that microagression?  I wanted macro; will do better next time.

5 Microaggression?  Is that when someone makes disparaging remarks about short people?

We would build mulberry harbors


Probably not, for one of two reasons:  1: We have other decent ports, not as convenient or deep, but decent. Some of these , like New Haven used to be ports but aren't anymore because of gentrification, and some, like Wilmington or Astoria, are perfectly decent ports but not currently central to the transportation network.

2:  A hit this bad (5-10 ports obliterated, millions dead and possibly fires raging for weeks) would be such an economic and psychological hit that the country might collapse.

There's another bright side Pixy. After all those of us in the northern hemisphere died of radiation, nuclear winter and mutant chinchillas,. the southern hemisphere is unlikely to suffer physical effects much.
The world will be your...umm....crab.

8 Well, it might not be a good idea to antagonise people with great big, scary nuclear weapons to the point where they consider using them.   The US has long had a policy of doing exactly that since WWII, so I suppose we should be used to it occurring.  What annoys me though, is that Washington likes to play the victim when it's policies started the whole process off.