Translation Glitch? The Daily Beast reports on a story that could be confirmation of a suspected Russian weapons system or simple disinformation. (via)
It seems that Russian TV, while reporting on a meeting between Putin and Russian defense officials, captured a good shot of a page describing a weapon designed to be fired into a harbor and inflict considerable damage and radioactivity, shutting the port down for years. The story ran on Russian TV once and rebroadcast with the 2 second "breach" excised, but an unedited version was recorded and is making the rounds on the intertubes.
It's unclear if this was an intentional leak intended to fill us with terror or just a screw up. Even if the leak is intentional, it could be a real weapon system or it could just be them trolling the world. 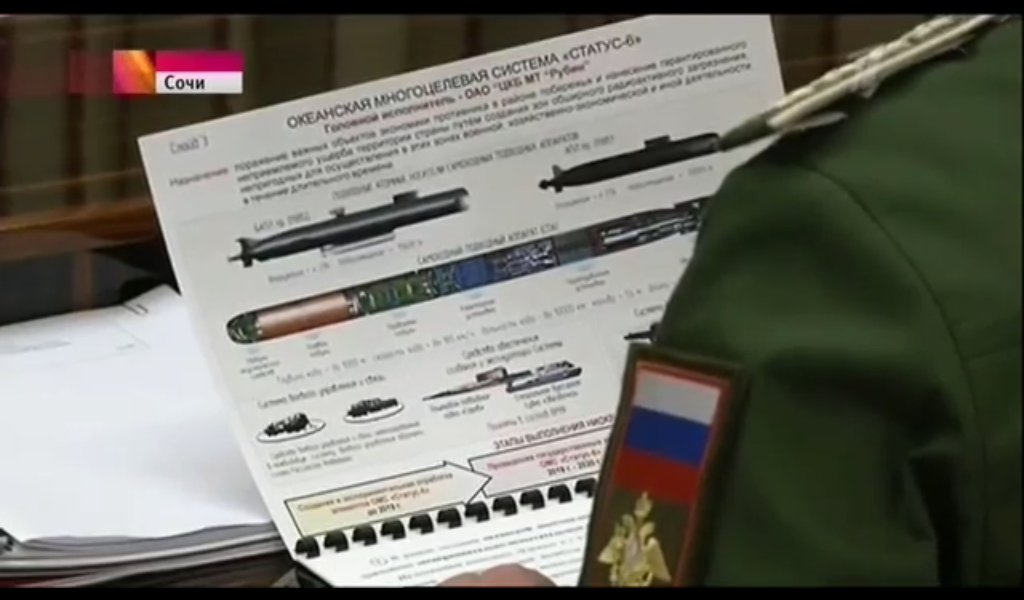 In fact, the device described is tantalizingly close to a rumored Russian project called Kanyon which we blogged about some months ago.  The dimensions of the weapon are also pretty close to the T-15 torpedo concept from the late '50's and early '60s (which was supposed to carry a 100+ megaton warhead).

That's one impressive torpedo tube.
For some reason, the Daily Beast seems to think that this is a radiological weapon rather than a nuke.That is, the article is describing a conventional explosive laced with radioactives. Assuming that it is real, that seems a highly unlikely design choice.
Dirty bomb does not only refer to conventional explosives dispersing radioactives. There is such a thing as a dirty nuke. If a thermonuclear bomb has something like enriched uranium as its secondary stage tamper, it will greatly increase the yield of the weapon because the fissioning tamper will squeeze more energy out of the fusion stage and being involved with the fusion explosion, it will itself undergo fission and add its yield to the total explosive force of the bomb. This has the potential of, in some cases, more than doubling the yield of the weapon. The trade-off is that the bomb is getting much more of its 'splody' from fission and leaves behind far more radioactive pollution. The U.S.A. deployed a 3 stage weapon, the B-41, which came in two versions, the clean version which replaced the third stage with lead or some-such was about 9 MT in yield, the dirty version which had a working 3rd stage had an estimated yield of 25 megatons. It was expected to be SO dirty that the full yield version was never tested due to environmental concerns...in the 1950's. The weapon was replaced with the B-53 which, it seems, did away with the dirty version altogether. Normal fusion weapons can be made dirty (and increase their yield, but having enriched uranium in the casing makes them dangerous to handle due to radiation hazards and I think the US had gotten rid of any such weapons by the end of the '80s.
The Russians have kept using three stage nukes such as their big 20MT  (8F675 ?) warheads that they recently removed from their SS-18 ICBMs. In that case the high yield seems to have been intended to be used in space to generate a big EMP.
A multi megaton weapon going off in a harbor would combine the aforementioned radiological effects with the dreadful fallout of a ground burst. It would certainly be a dirty bomb by any reasonable measure.
If real, this weapon seems worrisome. The intention of destroying what they see as Atlantacist harbors for a generation or more may have ideological as well as strategic implications from a Eurasianist  perspective. It can't really act as a deterrent since deploying it would be an act of war and announcing it destroys its tactical (in this case, arguably  strategic) surprise.

1 Russian consensus is that it was a leak to demonstrate that ABM will not help if things get serious. You know that ABM is an idea-fixe in Russian government circles. They are really hopping mad about Midcourse interceptors, THAAD, and Patriots. And this is a result of the obsession. They work on hypersonics, too.

We all saw what you did there, Pete.