Um..... I am on record as saying that I think there was a lot that was sus about the 2020 election, but that it probably wasn't stolen. Furthermore, even in the event that it WAS, there's no way to prove it, because the more lurid claims about software issues are, INHERENTLY unprovable in the absence of an opening up of the voting machines code. And the more lurid claims frankly are pretty retarded....no way in hell China was running the voting machines for instance.
The best that could be  done is to adopt paper ballots and strict ID requirements in the future so that concerns, wether they come from Stacey Abrams, Al Gore, Or Donald Trump can be swiftly put to rest one way or another.
This has been my position since about February. While the second paragraph is still solidly my position, my faith in the wisdom of the first turns out to be at odds with one of the most important rules of political discourse in current year.
To Wit:
So.... the polling firm Rasmussen, has produced this twitter thread, which was linked to by Ed Driscoll over at Instapundit the other day, and I've just been walking in circles pulling what's left of my hair out for the last few hours because this thread and the stories it links to are, frankly, crazy-cakes.
It seems that a fraud case in L.A. is fraught with the implication that Chinese intelligence had access to the software of the voting machines in several states, and if I'm reading this right, administrative security privileges to boot.
Rasmussen again: 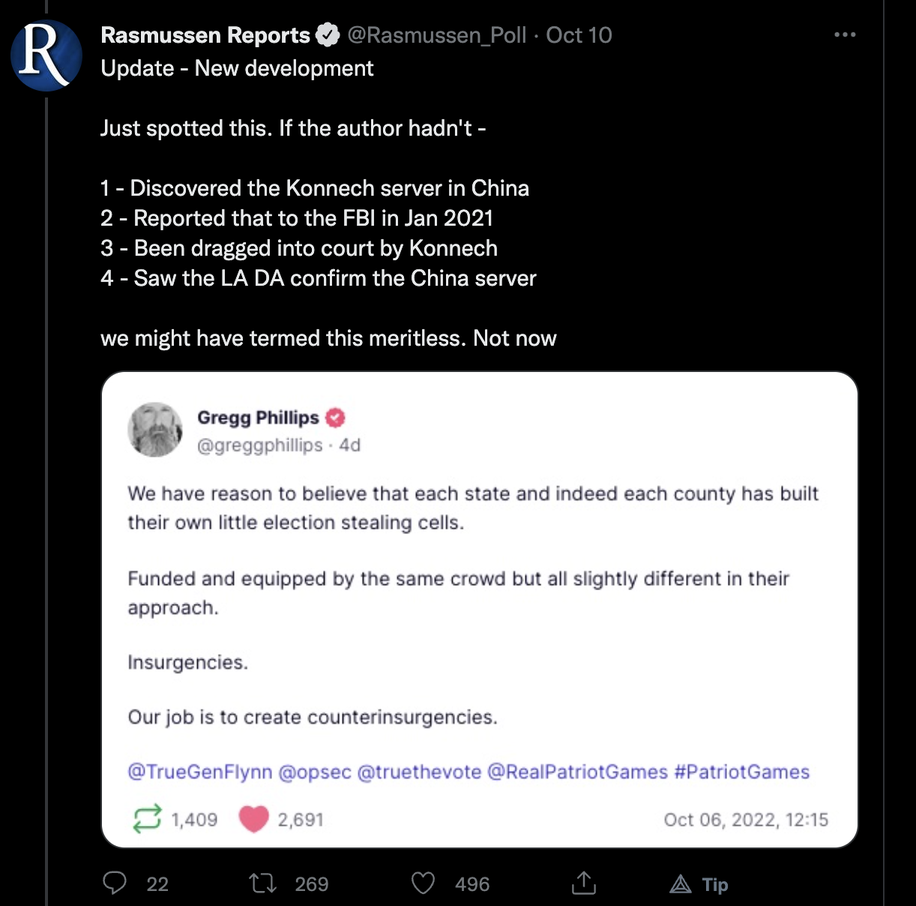 Link's good, I just can't seem to be able to embed Tweets anymore.
The New York Times is actually covering this, it's too big a story to ignore, but the article seems to omit the rather pertinent fact that Chinese Software engineers in China have administrative privileges on the tally counts of these, ostensibly U.S., voting machines.
This rather consequential story seems to have connections to two other developments, a scandal involving overseas and military voting (run by the same firm) and the curious involvement of Minnesota  Michigan Governor Gretchen Whitmer with the same firm.
In completely unrelated news, an "Error Code" has reportedly been found in the voting Machines of 97% of Georgia Counties.
True the Vote, the election watchdog group that has been under fire for making these claims for some time does seem to have been at least partially vindicated.
Joe Biden is President.
There is no constitutional process for a do-over of a U.S. federal election.
The implications of all of this on the last and upcoming election are, while troubling, unclear.
Everyone is innocent until proven guilty in a court of law.
Ranting, raving, and, God forbid, rioting will only play into the Democrat's hands, as it did on January 6th 2021.
So, don't go off half cocked.
But do follow this story. I'm not sure what to think of it.
But I've got a sick feeling in the pit of my stomach...much like I did about some lurid stories coming out of Wuhan in the last few days of 2019.

1 Gretchen Whitmer is the pond-scum sucking governor of Michigan, not Minnesota.

2 Gee, I hate to say I told you so, but....  wait, did I?  I certainly thought it, but I've got this issue with being called a paranoid lunatic for going "lots of smoke --> fire"

It's not just the machines; it's the mail-in/drop box ballots.

4 It is only physical until they destroy the paper ballots after they 'count' them, which was the excuse Pennsylvania used to explain why there were no ballots that could be recount.

5 Yeah, I went essay mode on this again.

Thing is, Republicans have been pretending that Democratic election 'victories' were fair and binding for a very long time.

It takes careful tapdancing to go with the current popular historical narrative on the evils of the confederacy and of Jim Crow, and to then fail to draw certain conclusions about whether Wilson, FDR, JFK, etc., were really necessarily legitimately elected.

Thing is, Americans in general could at least trust that JFK was not a communist, and would not be carrying out a mass murder. Rape sisters, wives, and daughters, sure, but they didn't know about that, and such is much easier to conceal than plans for mass murder.

Biden and Biden's backers should have taken the L instead of compromising confidence in election outcomes when it was so apparently likely that the communists would be pushing for complete control and mass murder.

The blatantness of consistently insisting that electronic voting machines can be and must be secure in the current environment is the most reliable grounds for an inference of fraud, that anyone can study to be point of being confident of. But, there are only 300k electrical engineers employed in the US, and most of those are not security people, so the specifics of the a) hardware security matter in combination with b) the PRC being a hostile state and c) politicians warning us that hostile states may be meddling in US elections may be not be obvious to a general audience. PRC has hardware fabs, and the lawyers prevented us from being able to have any confidence from physical security that local collaborators had not temporarily replaced the hardware internals with PRC gimmicked hardware.

My first reason to infer that the PRC and Democrats were working together was 2016-2020, the breadth of the accusations made against Trump, and the noticeable absence of accusations that he was a PRC crony. He sells real estate to rich people, and the PRC has/had a lot of rich people hedging risks with real estate outside of the PRC.

I am fairly resolved that treating elections as illegitimate until we get a comprehensively secure election process can potentially be done by peaceful means. Screw the claim that future presidents will have any obligation to respect the legacy of Biden, or any other similarly apparently fraudulent 'presidents'.