So, FFH Anyone? The previous post got me to thinking about the importance (or lack thereof) of nomenclature in the assessment of warships and also how much aviation capability one might add to a surface combatant before one enters the zone of diminishing returns begins detracting from that ships mission.

This post over at CDR Salamanders got me to thinking about what the hell we might build to replace the FFG7s that's not the aluminum coffin that is the LCS.

As I have not slept much, these two thought resulted in this post...

The Oliver Hazard Perry class Frigates were much maligned in their day and are muh longed for in ours. They had a mediocre armament of a single standard missile launcher, a 3" gun forced on the navy by congress and 6 lightweight torpedo tubes. However they also had two helicopters and those, in combination with the ships hull mounted and towed sonars, made the vessel a formidable ASW craft, especially if operating in concert with one or more of her sisters. They also made the ship very useful for the peacetime roles the USN found itself required to play after the war everyone feared did not come to pass.

The were reliable, seaworthy andwere a bit faster than designed so they could be used with even  the nuclear carriers in a pinch.   USS Stark and USS Roberts proved the design could survive remarkable damage, though especially in the case of USS Stark the folly of using aluminum in the superstructure of a warship was relearned at great price.

These ships had little growth potential and were designed as cheap ships to pad out the numbers and complement the more expensive destroyers and cruisers.

Well they are at the end of their service lives now and the USN is replacing them with the Littoral Combat Ship.

Originally conceived as a corvette or fast attack craft with swappable mission modules and  helicopter capability that could be built in great numbers  due to its low cost, the LCS grew in cost to ludicrous proportions. It does have some some impressive characteristics though .
Firepower of Coast Guard Cutter,
Speed of cigarette boat,
Cost of European destroyer
Engines that keep on  not working right, 5 YEARS after commissioning.
" Look Ma! NO SONAR! "
Fiendishly difficult to clean 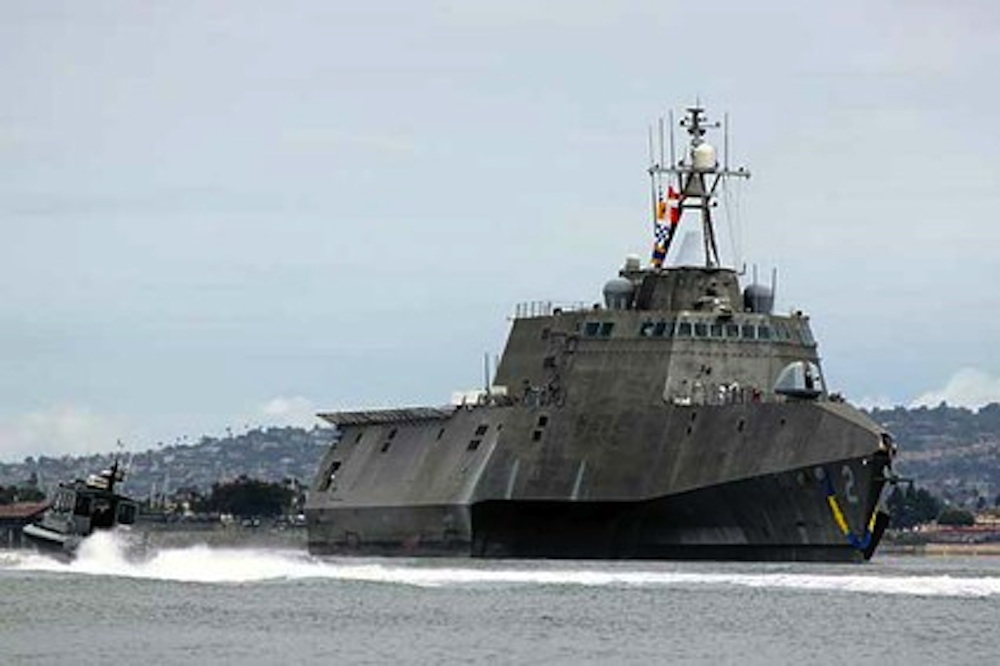 Of course, those characteristics tend to impress in the wrong way.

Additionally, there are two distinct classes because the navy couldn't decide which one sucked more and in fairness, both designs have their own unique shortcomings, (such as improperly fitted zincs) that they each bring to the table.

They do have two good points, particularly the trimaran design. They have very good aviation capability and a large working deck. However, no amount of tweaking is ever going to make them effective and especially not cost effective in ASW.

The navy needs numbers of ships, because a ship can only be in one place at a time. That is important for showing the flag and maintaining a presence in peacetime, it is even more so when dealing with submarines, and anti-submarine warfare is something that  is becoming increasingly important as many navies acquire modern diesel electric submarines.  The USA is a merchant republic and sea control and convoy protection are vital.

So whatever we buy to replace the LCS needs to be cheap enough to buy in numbers....during a decade we are likely to be very broke, with money left over after we spent it all on LCSs.

An all steel version of the OH Perry class might fit the bill, but adding a steel superstructure would require a complete redesign. We also need to remember that cost has to be kept down so only additional capability that can be had at minimal cost should be considered.

First off, what does an ASW vessel NEED?
Sonar (towed and hull)
Torpedo  tubes
Helicopters.

4 helicopters are the absolute minimum for maintaining one helicopter on station at all times so 5 seems like a good number if we can get it. But could one carry 5 helos on a frigate/destroyer sized hull?

Well, some years ago the German shipyard Bremer Vulkan put forth an idea for a helicopter capable Offshore Patrol Vessel.  Here is a screencap of their brochure

Brochure via The Aviation Forum

Now this is WAY too slow, at 18 kts, but this vessel seems to be using merchant marine diesels for fuel efficiency. The OHPs have over four times the horsepower on 60% of the displacement. I'm not suggesting the USN build this design, but his gives some idea of what is possible. The carrier like configuration improves airflow over the deck and minimizes the burble. A sponson or having the superstructure moved fore or aft would allow helos to land dead amidships for safety in horrid sea states.


There is a sketch of a 6000 ton vessel in the same design series but no brochure available.

Image Via The Secret Projects Forum

A military vessel should posses a decent point defense system and an escort should have at least a cursory air defense system. Fortunately the USN has the Evolved SeaSparrow Missile, which is a point defense missle, meaning it's fast reacting and has a short minimum range...it also has a maximum range of 27 miles which is on a par with some nations area defense systems.  It also has a fair SSM capability. Its a small missile and 4 can be packed in a single VLS tube so every 8 standard VLS cells=32 ESSMs.

AAA systems needs a fire control system, and here is where these things go off the rails cost wise. I'd keep it very austere, though the low end SPY-1K of the aegis system (designed for corvettes) might be acceptable and could leverage existing logistics and training..
No ABM capability for this ship, just point defense and the limited area defense that ESSM implies. Minimal ECM would be carried.

The above vessel is fitted with a French 100mm gun, but the brochure indicates that guns of up to 5 inches are doable, and indeed the MK 45 was designed with ships as small as 600 tons in mind. Putting one on the bow would help keep people from thinking of the ship as a carrier (which it most assuredly is not) and provide it with the useful gun the OHPs and LCS lack. For surface combat, a few Harpoon or NSM perhaps re-loadable from the ships magazines would be adequate.
(Spanish frigates carry 60 lightweight and heavyweight torpedoes so this ship should be able to carry 100 or more lightweight torpedo sized weapons)


Steel is cheap in comparison to electronics so if we can keep from going overboard on electronics and use an off the shelf propulsion plant we should get a decent ASW platform, that is very adaptable for peacetime duties that costs quite a bit less than what we are building now.

1 What about building an American version of the Japanese Hyuga-class CVH you mentioned in the last post?  If designed well, it'd have an added bonus of being readily convertible into cheap, fast-ish and relatively-expendable CVLs (compared to Nimitzes and Fords at least), if that sort of equipment becomes necessary.