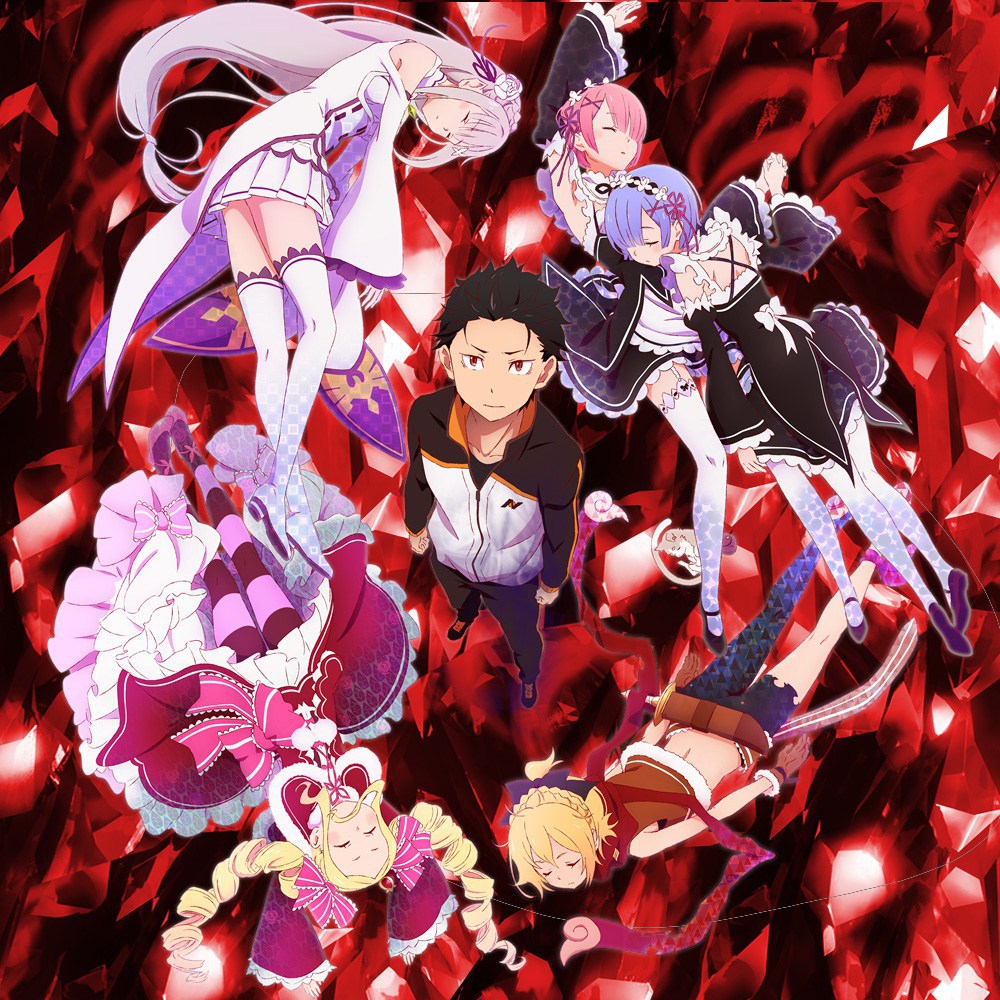 Unimpressed by the premise and the series poster (which screams harem) I started this show several weeks late. Life's little interventions have seen to it that I'm still 5 episodes behind, but this series warrants some comment before I rectify that transgression.
Re: Zero Starting Life in Another World is yet another story about a directionless young man who is zapped (for reasons unclear) into a Tolkien-esque  land of adventure.
But wait...don't go yet...
Subaru Natsuki takes a break from his grueling schedule of computer games to zip off to the local convenience store for a bite to eat, upon walking out his vision goes blurry for a moment and as as he refocuses, he notes that he is not in Saitama anymore... 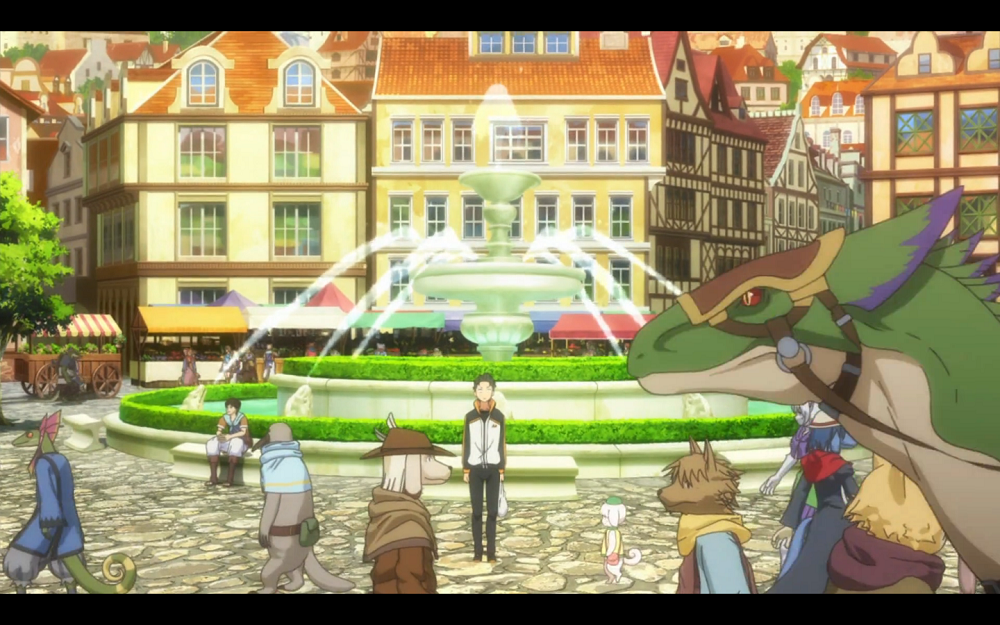 Our intrepid hero, after a moment of astonishment is remarkably calm. Having played MMORPGs and watched anime all his life, his first conclusion is not that he has had a stroke, or suffered head trauma, but that he has been drawn to this world to be a champion.
Over the course of the day he notes that he is illiterate in this land, has no legal tender, no special powers, and his starting inventory consists of a bag of nabs, a cup of tonkatsu ramen, a manga, a cell phone ( that is of limited utility as he is currently out of area) a jogging suit, a wallet and a plastic bag. Things begin to deteriorate from there until he encounters a young half-elf lady who introduces herself as Satella. 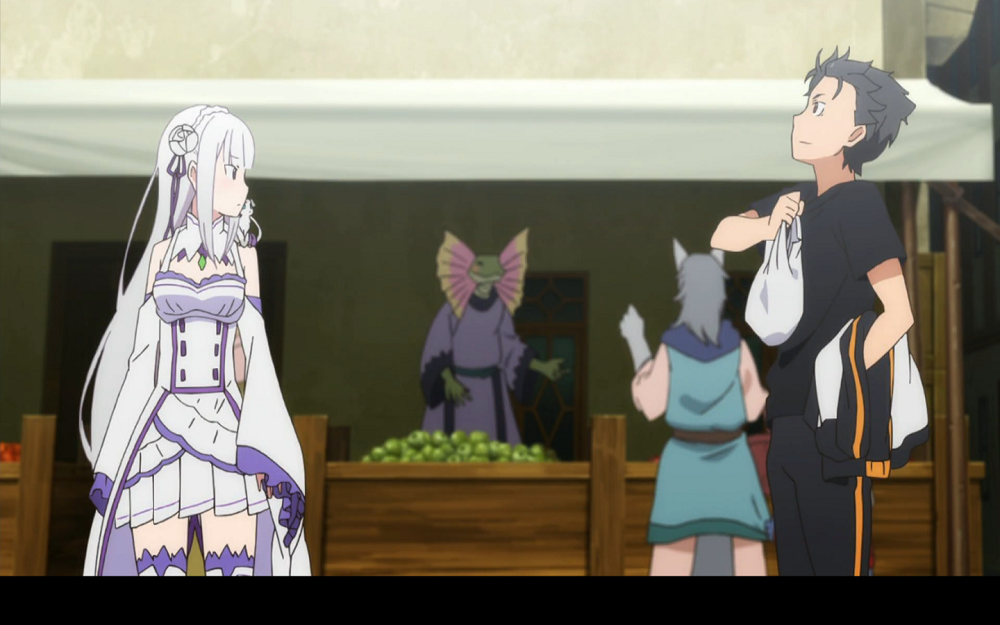 She determines, via inspection of his hands and physique that Subaru must (like her) be foreign nobility. They assist each other for approximately 17 minutes at which point the aforementioned situational deterioration resumes...with interest.   She dies. He dies. Everybody dies, quite horribly, painfully and graphically. However, Subaru discovers that he has one unique ability here. When he dies, he materializes alive, but with all of his memories at the time and place that he entered this realm.
This is an astonishingly well written and thought out show. Subaru is a teenage geek and the story pulls no punches in laying out his delusions and incompetence.  However, while he is realistically portrayed as initially pigheaded and self absorbed, he gets better in a believable (given the conceits of the show) and satisfying way. This is some of the best character development I've seen in a while. Subaru screws up a fair amount, but his errors are often not stupid. He learns from his mistakes and even when he learns the wrong thing he never stops fighting the good fight. Subaru is also terribly alone, not just because he's in a strange land, but because he becomes privy to a secret he cannot share, and what those around him assume to be flashes of insight are earned in the most horrible and painful way possible. Yeah, every time he dies, he re-spawns, goes through the whole process again, makes a note of where he screwed up and tries to save the day from a different angle...as often as not he dies again....horribly. painfully and with the memories of his agonizing and multitudinous dismemberments weighing on his sanity as he tries again from yet another angle. At least he finds that if he goes long enough without dying, his resurrection point changes to a time and place more recent. As taxing as his death scenes are on him, the biggest scar on Subaru's soul may have been inflicted that one time he didn't die. His character development includes quite a bit of PTSD which is completely believable.
"Satella" is an astonishingly well realized character. She too is, for different reasons, quite pointedly alone. However, what is remarkable about her is that her responses to events and, in particular, Subaru's antics are all quite realistic (given the caveat that she's a bit of an odd duck). She is very well written and comes across as an actual, complex, believable young woman. She is a magic user of some skill, but she has great strength of character as well. Her real name is Emilia, and she has been brought in from afar on the sponsorship of a local nobleman as a contender for the throne of this kingdom. There is a succession crisis and all the local candidates of eligible bloodlines represent special interests that are at odds with one another. The nobleman introduced her as a long shot candidate in the hopes that her unbiased outlook would prevent civil war...at least that's his official story. That she is a result of miscegenation makes her a particular long shot and has complicated her life quite a bit.
This is one of those shows that looks like the writers sold it to corporate as a harem show, and included several potential suitors for our hero in the concept art. However, that is a cunning misdirection. While there is, at episode 14 at least the potential for a love triangle or an alternate love interest in another extremely well realized female character, this is not a harem show at all. In fact the poster at the top is quite misleading as it leaves out all of the male characters except the protagonist...some of whom are actually attached to women in the picture
Re: Zero Starting Life in Another World  is (as of episode 14) a first rate fantasy, gut wrenchingly dark at times, but surprisingly intelligent and  beautifully characterized. This is a really good show that has kept me on the edge of my seat. I'm enjoying it immensely.
Do note that there are two pilot episodes(1A&1B)...you do need to watch them both.
UPDATE:Also, while this is a wonderful character centered adventure, I may have understated how graphically violent this tonal rollercoaster occasionally is.
UPDATE 2: Oh what the HELL is this? 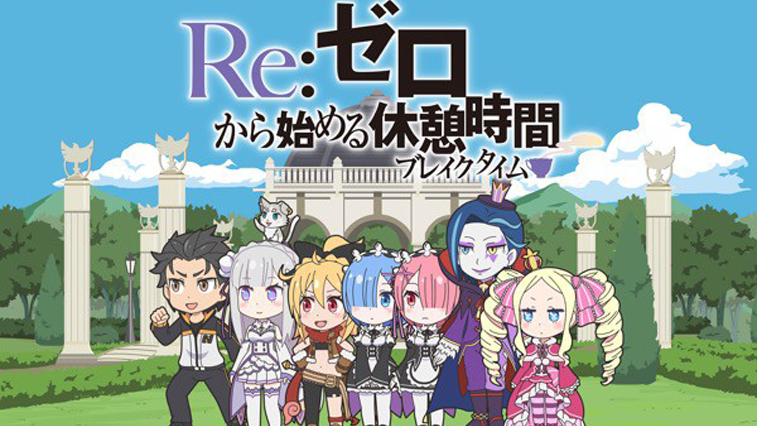 2 That sounds an awful lot like KonoSuba, played seriously.