Iseakai: But With a Different Skillset Motosu Urano is a Japanese Librarian.

Presumably, she is a very NAUGHTY one, because when her library collapses on her and burns during an earthquake she dies and goes...TO HELL. A very special hell reserved for naughty librarians.

But Perdition has bitten off more than it can chew and this badass bibliophile is about teach Gehenna itself a lesson it won't soon forget, as she embarks upon: The Ascendance of the Bookworm. 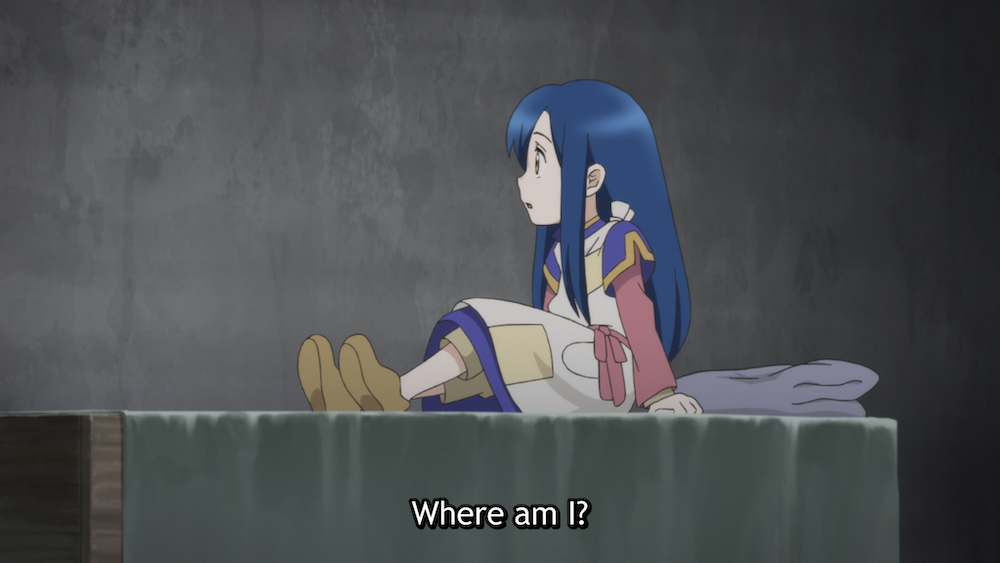 A special hell for naughty librarians; the one where there are no books.

In most isekai shows there is a social outcast getting yanked/summoned/reincarnated/teleported/excreted into another reality where the protagonist realizes something along the lines of "all those years of playing World of Warcraft taught me something about courage, tactics and the human condition."

The Ascendance of the Bookworm is not a typical isekai as this young lady has no mad gaming skills and is transmigrated into the body of a very frail, illiterate 5 year old. Well, not quite illiterate, she has all of her memories of life in Japan, but the Japanese language is not a useful skill in Faux Middle Ages Earth. She is so desperate for something to read she resolves to write a book. But she wants it to be in the local language so she has to find out if there IS an alphabet and then locate someone in this virtually bookless hellhole who can teach her what the letters are...but first...she's going to make herself some soap.

You see, all those years of being well read, having eclectic interests, and enjoying hands on hobbies have taught her a little something about crafting.

Yes kids.
This is varsity isekai, where you've got to show your work.

Oh my, this is delightful, please don't let them mess this up.

1 When I saw the PV I immediately thought of "Lest Darkness Fall" by deCamp.  One of the hero's struggles is to invent printing.  And paper.  And ink...

2 The big difference is that Martin Padway had a firm grasp of the culture he ended up in, and a much better idea of how to go about inventing things, while Our Heroine struggles to figure out how to make things like papyrus based on vague memories of something she read one time that wasn't a detailed how-to book. She has to, um, "start small".

3 Concur. I expect a certain amount of "handwavium," which will be a tragedy if they do.  As BM noted, if they "science the shit" out of this series it could be a rare gem.
Today's episode (wtf is that fruit?) with her trying and abandoning papyrus was well done and telling.

4 I've read the manga.  It's still possible they'll screw up the anime adaptation, but the source material is solid throughout.

5 I dropped that manga after some 4 chapters. The heroine's character was insufferable. Perhaps they fixed it for anime.

6 Thus far I haven't found her so much insufferable as implacable, though it's still early.

7 I've read the first three novels since the anime started, and I can't think of anything where the word "insufferable" would apply.

8 In the very first chapters of the manga, she wants to be given a book, or parchment and ink so she can write her own.  Then she gets a lesson in economic reality - a single sheet of parchment costs as much as her father earns in a month, and ink costs even more.

That's when she switches from just asking to be given stuff to being determined to make it herself no matter what obstacles crop up.