First World Problems Comedy is dead. The news is dreadful and full of dire portents. However, if you have need to laugh at somebody, below the fold are the misadventures of some honkey ineptly trying to recover from the self inflicted hurdles of fatassery and mask mandates.
"So, there was this box, and being a catgirl, I got in it, as one does, and then I tossed bits of my bread at those chickens over there and suddenly they were over here, and and they got really friendly and then there were a lot in awkward spots and I don't dare to move and I've had to pee really bad for an hour so... HELP!" is by Tsukasa Masanaga. Support her on Skeb or buy her doujins at Melonbooks.
I've sort of reached a plateau in my recovery as I've topped out on how far I can walk at about 4 miles, with 5 pound weights (somewhat below the 5 miles with 15 pound weights I was regularly doing before the stroke).
Still, physical therapy is going quite well. I've tested out of occupational therapy and regular physical therapy has moved me into new exercises. I feel like I could go to work now but a doctor's note is still not forthcoming, and, in any event, until I can get a waiver from my doctor and pass a DMV test to get a driving exemption, I can't get to work.
***********************
In the course of my walking through the swamp, I finally made it all the way to Route 70, a 4 lane highway. About 2 miles down that road is a Wall-Mart, so I set off and got some keto friendly snacks, and canned chicken, because Mom believes that carbs are synonymous with love...and, I'm stuck. The walk back with the groceries was rather more challenging than other walks, but I now have a stash of things that are not bread.
Having made it to Route 70, I decided to forgo the weights and see how far I can go, and what, besides Wall-Mart there is in the area. Dressing in a horrible but very visible orange shirt (because RT. 70 is...busy) I set off. It turns out that 2 miles past Wall-Mart there is a terrifying, pedestrian-unfriendly bridge beyond which resides a small shopping center. About a mile beyond that, the swamp has given way to farmland and there is a small mobile home dealership. Just beyond that are railroad tracks, but I had not gotten quite that far when the police arrived. 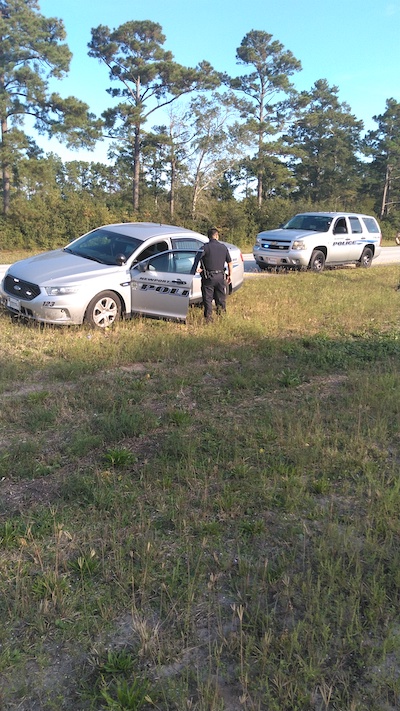 Shortly before I got to the train tracks two patrol cruisers pulled over and I was approached by a county policeman and a state trooper. It seems that someone had reported an indigent limping down the median. However upon seeing me the responding patrolman had called for backup. I answered their questions, and explained that I was recovering from a stroke and trying to get back into shape, that I was walking down the median because as scary as the median of RT.70 was, it was an easier walk than the back roads in the swamp which had virtually no shoulder and steeply descended into bogs, wherein reside water moccasins and alligators. The officers explained to me that about two miles into the woods is a state prison, and the attire for the prisoners is an orange shirt and green pants. When one officer had approached me on a welfare check, he'd called for backup. I gave him my ID, and a laugh was had by all, until it was noted that my licenses was suspended...which it is because Virginia suspends driver's licenses whenever someone has a stroke. They told me to be careful and asked if I needed assistance.  I said no, promised to make better fashion choices in the future and they then  proceeded on their way. At that point I noted some buzzards circling my position and pondered going back when unexpectedly, my sister pulled up in her car. Having deposited her kids at their grandparents house, she was driving back to her house an hour distant down RT70. She was completely hysterical that I had walked that far and insisted on taking me back. In that way, the buzzards were thwarted.
**************************
Many years ago I had dial-up. I honestly don't remember it being this unreliable. Streaming services are very low quality, hideous in fact, which is to be expected, but there are issues with it just loosing connection briefly which can mess with E-mail access or making a blog post. I wonder if modern programs and web design are simply geared to higher performance connectivity to the exclusion of the lower-end arrangements. This is, in the grand scheme of things the most minor of first world problems, which, being one of my biggest gripes at the moment, provides some perspective on exactly how bad my situation actually is.

1 It wasn't your dialup, Brickmuppet.  Facebook was down for everyone.

3 I know back in The Slow Times, before Pond Central had any broadband options (2007), my dialup was already experiencing problems choking down websites. "Best viewed with a speed of ..." messages were actually warnings for me.
And that was 14 years ago, think about the way the web has changed in that time. I can't imagine they've gotten more slow-friendly, or "slow" is a speed that would have been blazing fast back then.