Doing it Right The USN has a crying need for a low end patrol vessel.

Numbers are necessary because, despite advances in technology. A ship can only be in one place at once. It might be able to use aircraft and small boats to expand its immediate area of influence, but this does not actually reduce the need for numbers ships to be in disparate locations at the same time in order to do the various low end things that navy's and coast guards do.

Showing the flag, hunting pirates, intel gathering, Search and Rescue, disaster relief law enforcement do not require Aegis Destroyers or Cruisers and it is a waste of those valuable resources to dedicate them to such missions, and in any event sufficient numbers of such capital ships cannot be afforded.

Lots of low end ships are needed and the LCS is far too expensive to buy in numbers, particularly in the current financial crisis.

DCN has come up with a family of warships called the GOWIND.

The baseline vessel is an  OPV. One prototype, the FS Adroit, has been built and has been extensively tested by the French Navy. Adroit is a very austere vessel of 800 tons but it has some interesting features. 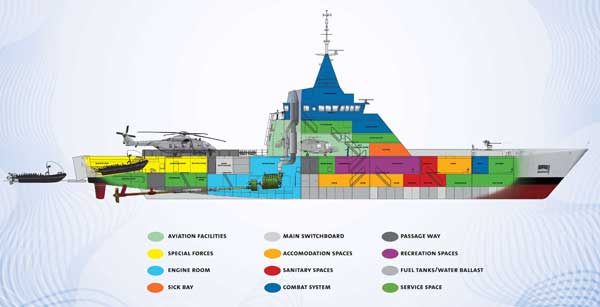 It it currently only armed with a 20mm cannon, but it has hard points for an OTO Melera Super Rapid 76mm gun, 8 Exocet SSMs and a 12 cell (Wikipedia says 16 cell) launcher for ASTER 15 point defense missiles.

These are all comparable to, and except for the Exocets, larger than, the equivalent USN weapons which are the 57mm Bofors, Harpoon and the short MK 41 vls for ESSM. (There is a new ultra compact 36 cell ESSM launcher that appears on the Huntington Ingalls patrol frigate proposal that looks to be even smaller but no hard data is forthcoming.)

The French ship is slow; only 21 kts, but it uses the same power that its 400 ton predecessor used to attain 22. It is very hydro-dynamically efficient and has a range of 8000NM. The hull form is designed to be scaled up for much faster speeds in high end versions so higher powered engines might get the speed up to 24 kts at some cost in endurance.

It is seaworthy too. The French offered the vessel to South Africa and pitched it by the straightforward method of sailing Adroit to Cape Town and having the ship bob about and do operational things in the Southern Ocean, which, due to it's infinite fetch, sports some of the most hellish sea conditions on the planet.

The ship can be operated ( in theory) by around 30 personnel due in part to its very low maintenance commercial engines. However it has accommodation for 60, which the French have found is quite fortuitous as continuous boardings require multiple boarding parties. The ships fire control system is designed to cope with its wartime weapons fit. It is fitted with communications gear allowing it to integrate into a NATO task force as well. There is no mention of its EW fit but I have to assume it is very austere.

The Adroit would seem to be an exceedingly good fit for the US Coast Guard since it offers comparable capability to the medium endurance cutters with much better seaworthiness and range at a low enough cost that large numbers can be built. It only needs a 57mm gun and some crew served weapons as far a armament, but it comes ready to be upgraded with bolt on missiles to a slow corvette in time of war. A towed array would give it the ability to act as a sonar tug and Lily-pad for Navy Seahawks and a Seasprite replacing the Dolphin in the hangar would make it a very decent second line ASW ship in a major war. It's quite slow, but the Navy might buy a few to pad out numbers. It can keep up with the 'Gator Navy' or a convoy and can show the flag and look good doing it.

The French, having proven the concept have a variety of evolutionary developments in the pipeline up to full-on 30 kt frigates. They've recently sold 6 of an uprated version to Malaysia . This is a full fledged Corvette with 28 kt speed, full sized hangar, real superstructure and a more extensive weapons & sensor fit. The contract for 6 corvettes is  US $2.6 billion  which works out to a bit over 433 million apiece for vessels rather more capable that the LCS. With a range of 5000 NM its practically a small frigate.

This would seem to be a good replacement for the Perrys and rather a step up from either LCS design.

One thing this can't do very well, is mine warfare. For that specialized mission, a development of the current wooden sweepers, which do work, might be a better fit.

There are legal and political issues to buying foreign designs, (though these don't apply as much to the CG). However, the existence of these vessels shows what is possible. This evolutionary approach of building on proven designs still works, as the French are proving. It is something the USN needs to get back to.

1 Hi Brick.  Usually I'm just a reader, but I've read through your posts about the LCS and the Navy's and CG's needs to get on the ball about replacing their aging surface ships, and...well, let's just put it this way: what is the deal with the LCS?  I've read through the concept at various websites, and I'm having trouble getting a clear picture of exactly what the Navy's up to here.  On the one hand, there seems to be some agreement that what's needed for the future in Western navies is a (wait for it) more cost effective solution than simply designing the next-gen frigate (and presumably destroyer and cruiser as well), such that I've read articles outright criticizing Great Britain for even designing the Type-26 (correct me if I have the number wrong, please).

Then, I read here and elsewhere about new designs in the corvette-frigate range that seem to be filling gaps which one would think would optimally be filled precisely by the next generation of American and British designs, but these designs seem at least in some ways to be superior to the LCS!

So again: what is the Navy up to with the LCS?  Is this a complete rethinking and reconceptualizing of what we think of as the modern American navy, doing away with classic designs (frigate, destroyer, cruiser) and the way we think about their missions?  Or has the Navy outsmarted itself here in trying to figure out how best to fulfill its mission(s) in the future?  Thanks a bunch, Tom

2 A further issue is really that video gaming became one of the all-time largest forms of fun for people of any age. Kids engage in video games, and also adults do, too. The XBox 360 has become the favorite games systems for folks who love to have a huge variety of games available to them, as well as who like to play live with some others all over the world. Thanks for sharing your thinking.