Cannibalism, Self Mutilation and Consensus Building 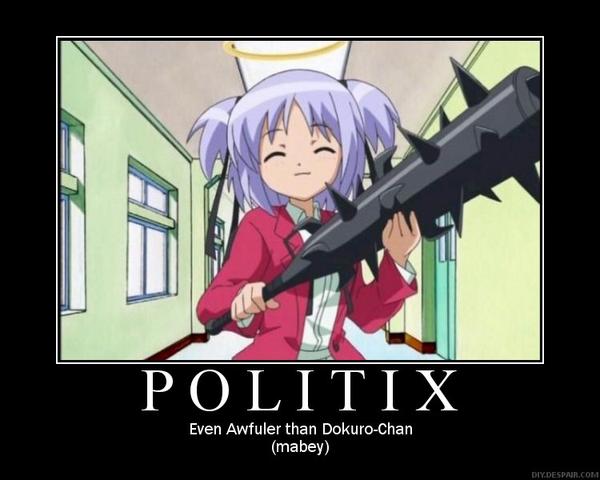 Lord...I wanna break from politics. I've got partial posts in the "tube" on Rocket Girls, Haruhi, Space, water purification,  energy and curmudgeonism. Ubu Roi however, has posted a long and passionate comment on politics that deserves a full response. So...below the fold we go....
Ubu is working to destroy the Republican party in favor of the American Conservative Party which he feels will be a pure conservative experience.

It's not the Jacksonian right that destroyed the Republican party

Which is not entirely untrue as they had a little help from the Rockefeller Wing, and the William Jennings Bryan Wing, but the Jacksonians really carried the water for that in this election.

The Jacksonians are great to have in a fight and like most other conservatives want to be left alone. However they have a very real nativist streak and their loud and off putting opposition to giving the refugees in our midst a  path to citizenship cost us the Hispanic vote this time around.
There was a noticeable drop in Hispanic support after the loud anti-immigrant sentiment.
This is not the way forward.
We need to be drawing people in rather than driving them away.

There are things that the Jacksonians can offer to the conservative movement and it is true that the frequently sneering & urbane Rockefeller wing has not utilized them to its advantage or even listened but leaving does not increase ones influence. The history of the Libertarians is illustrative of this. The conservative movement is a hodgepodge of views ranging from the strict constitutionalists to those who are more concerned with social issues. When the Libertarians left, they ceded influence to the Rockefeller Wing and the WJ Bryan Wing (who are refugees from the anti-Christian views of many Dems). If the Jacksonians bolt to the ACP then they will have NO influence on the Republican Party other than to make it far harder to get them elected.

Ubu may see this as a feature and not a bug but its only result will be to reinforce the Democrats socialist hegemony. The Republicans will not be influenced in ways that Ubu wants and will become more rather than less moderate on small government principles...oh, and the Jacksonians will join the Libertarians in the satisfyingly cathartic moral superiority of utter irrelevance....especially if you are going to try to build a national party from the...ummm...dozens....of militant atheist Jacksonians.

Rather than gloating and running of with antireligious zealot Bill Quick, there would seem to be a better way.

The national bitchslapping the Republican brand has recieved provides a rare opportunity to influence its direction and get it more on track with constitutional and liberty oriented principles. The one really bright spot in McCains campaign was Palin. The establishment, which had shot themselves in the foot with their lack of reform are now beheading themselves in their inept and childish attempts to back stab her.

This gives a rare opportunity to those of us who want reform...

The Jacksonians, more than most are people who want to be left the hell alone.This dovetails into reducing the influince of the religious right in certain planks that encourage governmental intervention and social engineering.   The Rockefeller wing needs to stop sneering at those they deem insuficiently urbane (Palin et all).

Conversely, both of these groups have a lot to offer. The Religious right, when not crusading about lifestyle choices are the level best group in the nation for demonstrating the efficacy of private charity...bar none....The Rockefeller wing tends to be populated with successful business people and brings a needed international perspective. The Libertarian wing has less influence because of the purists up and leaving, but the spirit of Goldwater and Reagan is still there as demonstrated by Palins socially neutral record in Alaska. The Republicans are a sort of multifaceted yin/yang arrangement and can achieve great things if they are in balance.

Politics is the art of compromise and finding common ground. The Republicans have a superbly diverse group of weirdos that, if they can refrain from eating each other or storming off in a huff have the potential to be dynamic, forward looking  guardians of liberty  and successful opponents to the statist, government oriented suffocation that is the Democrats.

This is a robust combination that is never going to result from people obsessed with ideological purity who form a group based not on seeking new members, but in punishing those they dislike.

Ubu, I like your blogs and I gather that we agree on far more than we don't. I can't wish you success in your 3rd party endeavor but I do wish you well and hope you come back from time to time.

A few words on the immigration situation are in order....

I'm not suggesting that the anger about the illegal immigrant situation is not understandable...The situation we face is inexcusable. The border should have been controlled long ago.

Also, despite the way it plays with the immigrant communities, at least in theory, the desire to control our borders is not bigotry. Most of our ancestors did not break the law to come here. Those who have come here since those laws were enacted and ponied up the 10 grand or so needed, waited in line, and dealt with the bureaucratic hell of the immigration services can rightly complain that allowing the illegals to stay in the country is unfair.
However, we conservatives are generally adult enough to understand that ...well....LIFE IS SOMETIMES UNFAIR!!! In any other context these people would be calling the "Whaaambulance" as they like to say.

Note that the "Shamnesty" as they like to call it would have not been a free ride. The immigrants would have had to pay back taxes and work off their entry fee as well as learn English...in other words work hard to assimilate which is a damned site better than the multi-culti dems will do.

There is a humanitarian dimension as well. These people are coming here because they are desperate. The United States of Mexico is in a state of near collapse and other Latin American nations are worse. It is simply not humane to send them back to the narco terrorist controlled village they just escaped from.

Ubu suggest in his comment that it was Rudy Giuliani's pro-choice stance that cost him the nomination. That was a factor as was his poorly run campaign, but the big thing that got him knocked out was the Jacksonians fury over his appreciation of the fact that there are 12 million or more illegals here and hunting them down is going to be damned expensive, tie up a lot of law enforcement and  involve a LOT of profiling and general harassment of legal Hispanics.

We cannot go into a wayback machine and build a wall and enforce the borders. That needs to happen now. Personally I support building an edifice comparable to the Great wall of China....That was built with coolies, pickaxes and shovels. We have earthmovers, cranes and immigrants.

This is a bitter pill to be sure, but it is the situation we face.

There is a bright side if assimilation is chosen over alienation: with the exception of the jerks in LaRaza, these people come here to work. They don't want to be in the USM they want to be in the USA. The vast majority of them will make fine citizens if we assimilate them rather than alienate them. They will tend to be far better citizens than Bill Ayers or for that matter even Jerimiah Wright, Bill Maher, Barney Frank, Kieth Olberman, Michael Moore, Jamie Gorelick, and lots of other domestic pinheads.

One of the things about us righties is that we can find a bright side to anything.

1 I can usually find a bright side to things and I'm not a righty or a lefty.

The future is unwritten and always full of potential.