On the Spectrum of Lothsomeness
Alex Jones is a jerk, a creep, a lunatic, deeply offensive, societally corrosive, and an affront to all decency.
He also, to the best of my knowledge, is not advocating anyone get banned for saying things that he finds disgracious to his demented world view.
This makes him vastly less loathsome to me than the people who advocate de-platforming him, and somewhat less loathsome than those who think that this is 'not the hill to dies on' .
More in depth thoughts on this here, here, and here. A less current but more succinct take on this issue has been making the rounds as well.
Wherever they burn books, in the end will also burn human beings.
UPDATE:
Oh good Lord!

1 Thanks for that Axios link.  I'll add it to my daily roundup of social media idiocy.

2 And now, simultaneously, his site has gone down, and Twitter hit him with a 7-day suspension for posting to a link about internet censorship.

In Partial Compensation for the Limited Blogging

1 I applaud your taste though not your luck, good sir.  Hopefully the latter takes a turn for the better.

2 Some years ago, there was a fashion craze here in the midwest where the thing for young women to wear was overalls like these, except when they were cutoff into shorts.
A younger Wonderduck had a difficult time staying professional and keeping his composure during this period.  Who knew that overalls could look like that???

Never Rains Yesterday morning I received word that my folks had just gotten back from the hospital. My dad had been working on an outboard motor and got his hand caught in it.

Last night my mom fell down the stairs and broke her arm. Both are in their 70s.
I'll be leaving here in a few minutes. There are no computers down there and blogging from the Blackberry is quite difficult so we'll be off-line for a bit.

Well, this is Interesting Calexit, the campaign to have California secede from the U.S.A. and build utopia unfettered by the likes of U.S. has added a new dimension to their proposal.
The idea is to give all the federally owned land in the state to the Native Americans. 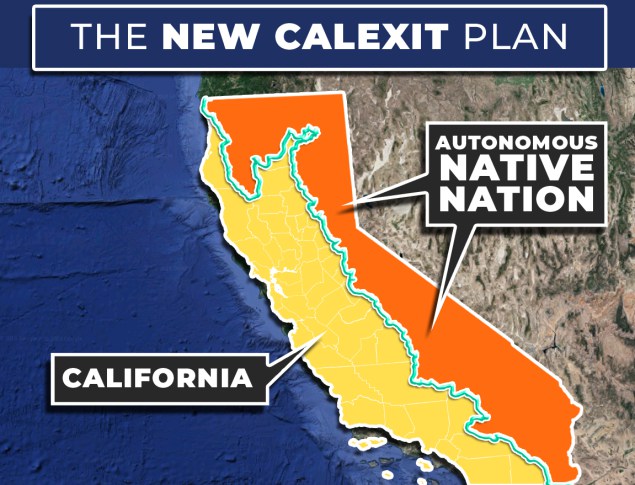 If one were to commit the disgraciousness of comparing that map to the actual federal land in California one might note some discrepancies... 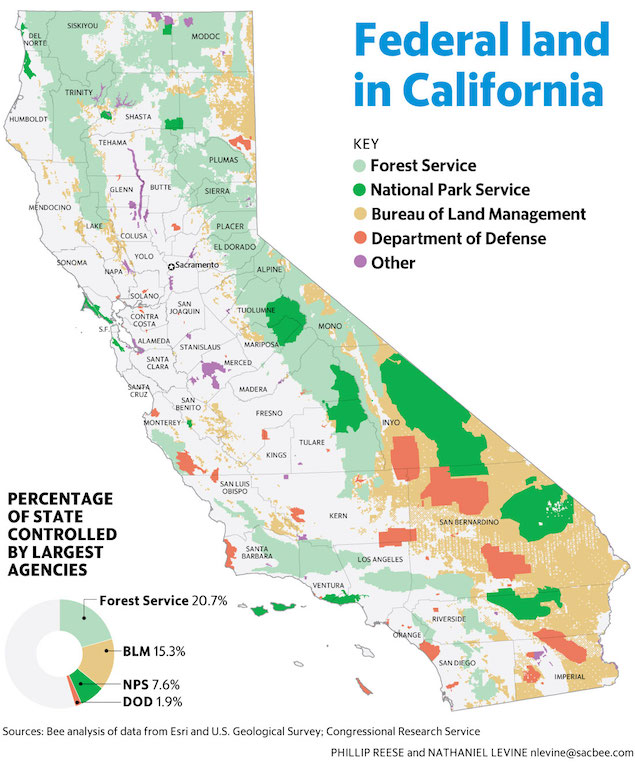 ..and in so doing reveal oneself to a troublemaker.
A good swath of the federal lands are not actually included, but they hardly count because they are prime coastal real estate or associated with Tony zip codes. A fair ammount of the federal lands are actually overseen by BLM which is not always the actual owner. Instead a good bit of that land is privately owned but tightly regulated. Finally there is a good deal of land in the allotted area that is NOT federally owned or administered.
Fear not my Jacobin friends, those areas voted for Trump.
Because their's no greater expression of charity than forcing other people to sacrifice.
I do note that the Native American country would be almost landlocked and its only access to the sea would be Crescent City and possibly Eureka, neither capable of handling deep draft vessels.
UPDATE: Oh look! It's up already.
The money quote is at the 04:50 mark.

1 It looks like that will put the Native Americans in charge of most of the fresh water used by the coastal cities.  I predict the coasies will quickly concoct a rationalization for occupying selected areas of the "Autonomous Native Nation" to ensure that this valuable resource is "properly and sustainably managed"...

2 Oh, look. White people giving land they don't want (or want to be owned by the people who have it) to Amerind nations and calling it a gift.

(I apologize for using the tone of deluded, but I thought it was appropriate.)

3 Just realized I got a sentence very wrong in that comment.  My apologies.  It should read (or don't want to be owned by the people who have it).

Do with all this what you will, 'muppet.

4 So, move the Indians to crap land nobody wants to live on. Let's call this "Trail of Tears II" (Electric Boogaloo?)

If memory serves, the American Indian tribes can only have the status of their reservations affected or changed through the federal government due to the applicable laws and treaties - and it also covers the tribes' relations with other nations.  So regardless of whatever opium dreams the CalExit folks like to believe, any changes regarding Indian land would require them to talk with the feds first.

This proposal reminds me of the last time Quebec separatists manage a serious push at independence, and people were pointing out that the Indian tribes in Quebec actually held the territory where the province's main hydroelectric dams were.

6 The real fun is that most of the water, electricity, oil, and perishable goods would be shipped through the new sovereign Indian nation(s). Screw casinos, that's real money!

The Video is So-So, but the Cover Actually Works
via