You...You Spilled Gainax on My Robot Show! The long awaited paycheck arrived...the first one in 5 weeks...and after the filling up the pickup of peril....with what must have been vintage wine or something... and getting the last book for school I walked out of a local store with Gurren Lagaan Volume 2. Today was spent studying, composing E-mails in Japanese and fretting about Ike, but at 6pm I hung it up and 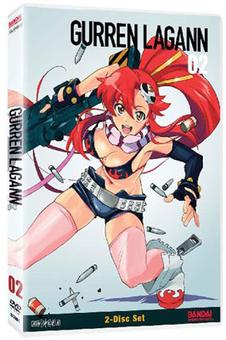 popped in the much anticipated DVD.
Like volume, one volume 2 is a very reasonably priced 2 disc set containing 9 episodes. Unlike volume one however, the marketing department very sensibly put teh Yoko on the cover of volume 2.

I had been quite taken by the first volume and was looking forward to 9 episodes of teh Yoko, giant fighting robots, adventure and teh Yoko...

What I got was 8 episodes of satisfying giant robot battles, a goofy albino Moe Maiden, adventure, heroism, a basically satisfying wrap-up of most plot threads and not quite enough of teh Yoko.
Oh, and one episode of patented Gainax Gut Punchery....

My biggest problem with the show is the crass stupidity and pig headedness of a lot of the cast, which frequently leads to seemingly unnecessary plot complications this is not as annoying as it could be due in part to the fact that said problems are usually resolved by thoroughly amusing giant robot battles. I should mention that the bombastic character Kamina comes off much better in this volume than he did in the first disc when he was...you know...alive 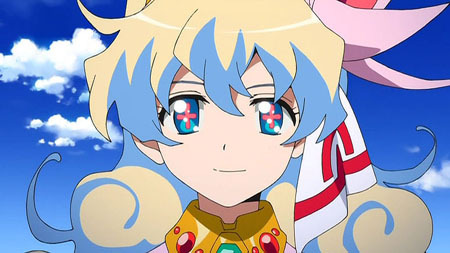 This show is indeed very goofy on its face but there is a surprisingly poignant side to it too.Nia Teppelin the Erie pale outsider with the jigsaw eyes introduced at the end of volume 1  is an effective foil for and observer of the rest of the cast, alien in her outlook, her decency and forthrightness are not only admirable but, at the end of volume1, had saved everyone's behind, however she is so socially inept and awkward that she frequently comes off to the cast as callous or thoughtless. 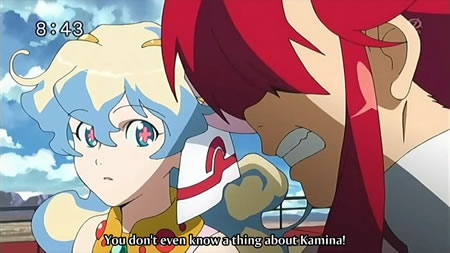 image via Concrete Badger
Now I'm a bit put off by the Moe' thing (which Pulpjunkie describes as "a girl as a pet" ) and Nina is so Moe' it is jarring, but the character is actually quite deep and strong in an utterly different way than teh Yoko.

The goofball nature of the series combined with the genuine drama and pathos is an odd mix that has rarely been pulled off, being reminiscent of Van Dread in a way. All in all it was a very satisfying and quite enjoyable 8 episodes. I was impressed.

Then suddenly... I was reminded this was a Gainax show...and the show began chanelling Josh Wheadon.
There is a clifhanger.
We'll leave it at that....
...while we contemplate the obligatory beach episode...and teh Yoko 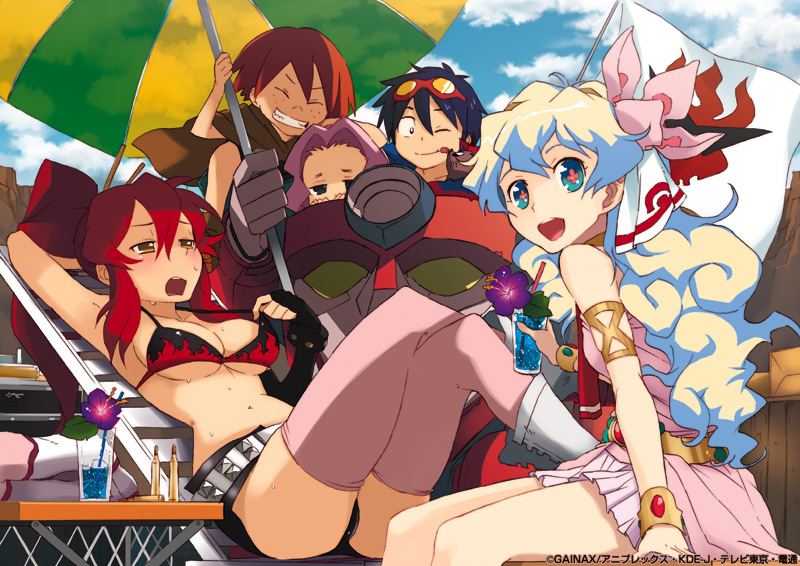 1 One of the reasons I'm a little afraid to watch the rest of this series is that I have a fear they're going to kill Yoko off before the end of the show.

2 I'm a few episodes into the third story arc, and she's entirely absent so far, for reasons I can't even begin to describe without major spoilers.  I expect she'll reappear at some point near the end of the arc to save the day.

From one spoiler that I read (that may or may not have been in jest), I would gather that she survives, though some other characters may not.

The way they did the story arcs, it's almost impossible to talk about the series to someone who hasn't seen the end of the previous arc, much less someone like yourself that is two arcs back.  They certainly like to end things on dramatic notes.

3 BTW, is that shot a screencap, or fan-art?  I don't remember that scene.


BTW, the "girl as a pet" remark is one that's (perhaps apocryphally) attributed to Hayao Miyazaki...

BTW, is that shot a screencap, or fan-art?  I don't remember that scene.

No that's official Gainax art. In the actual beach episode teh Yoko's swimsuit covered about 5 times as much surface area as her normal outfit (and actually looked better).