Why Japan Has Helicopter Destroyers In the Late 1950's and early1960s the Japanese began seriously rebuilding their navy Maritime Self Defense Force. The reason for this was that although war as an instrument of policy was forbidden to them by their postwar constitution, the reality is that Japan imports most of its calories and virtually all of its energy and resources. Defense of the sea lanes was vital as was the ability to fend off invaders from certain of  Japan's neighbors that defined "peace" as an absence of non-communist nations.

To this end, Japan began producing destroyers for antisubmarine warfare, that is convoy protection of Japans sea lanes. This is a purely defensive operation well within the purview of Japans constitutional restrictions on its military self defense forces.  The 1950s destroyers carried fearsome torpedo batteries, but these were seen in the context of coastal defense and convoy defense, particularly with long range ASW torpedoes.

By the early '60s though, the concept of heavyweight ASW torpedoes was looking less tenable. The US and Australia were developing rocket boosted torpedoes and the Canadians, French and Italians were looking at big ASW Helicopters, which could do many of the things the US Blimps had done in WW2 but had much shorter range.

The Japanese decided to go with both options, buying ASROC from the US and developing the American Sea King as an ASW platform. The Sea King was a huge chopper, and to be effective, at least  one (preferably 2) needed to be on station around a convoy, dropping sonar buoys and dipping their big sonar  at any time. However helicopters have very short legs and the Sea King is awkward to handle on a small ship*. For destroyers the Japanese joined with the Americans in producing an ultimately abortive small torpedo carrying drone but this was no substitute for the capabilities of the Sea King.

To this end the Japanese ordered an experimental small helicopter carrier as part of the same procurement program as their prototype guided missile destroyer Amatsukaze. I've found very little on this ship.  It reportedly was to have been about 10,000 tons and armed with 8 3" 50 caliber guns and 8-10 Sea Kings. As such it would seem to be a purely defensive ship with next to no capability to do anything except guard Japans sea lanes...it also would have been exceedingly useful in that role and made Japanese convoy defense operations vastly more effective. Japan was looking at 4-6 escort groups each built around one of these vessels.

Some sources seem to imply it was actually laid down, but in any event when the Japanese legislature realized that the 'large ASW support ship" was going to have a full length flight deck, an island to the side and be called a 'carrier' they had puppies and cancelled the whole project. They decreed that the Japanese navy could only have destroyers,  frigates and patrol craft as surface combatants and the navy built a series of destroyers which could each carry 3 of the big Sea Kings instead. 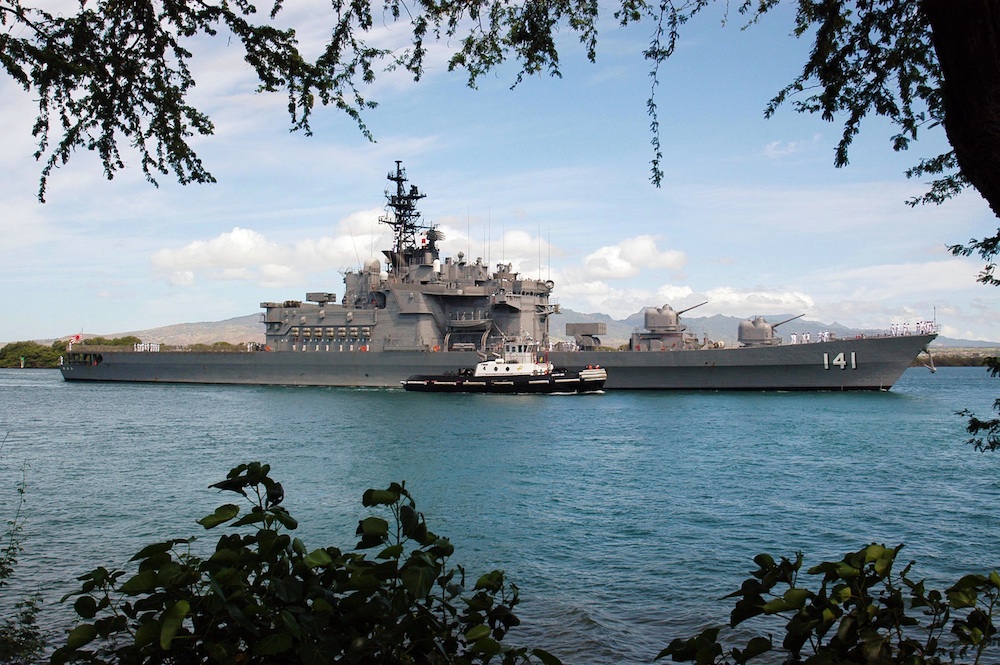 However experience has shown that three helicopters is insufficient to keep even 1 on station at all times. There is also the need for a large seaworthy vessel to operate helicopters in high sea states and convoy defense requires a certain amount of command and control space beyond that of an escort. An escort carrier is precisely what  Japan need. It's  too bad they can't have any carriers isn't it ?

In a COMPLETELY unrelated development. Japan has begun replacing it's large helicopter capable destroyers of the Haruna and Shirane classes with the somewhat larger 'destroyers' of the Hyuga class. These carry an official complement of 4 big helicopters in a VERY spacious hanger that can accommodate 16 or more in a pinch. Of course, as the JMSDF has explained to the legislature, these ships have a phased array radar and a battery of between 40 and 64 guided missiles (depending on which missile types are carried in their 16 missile tubes) so they are totally destroyers. 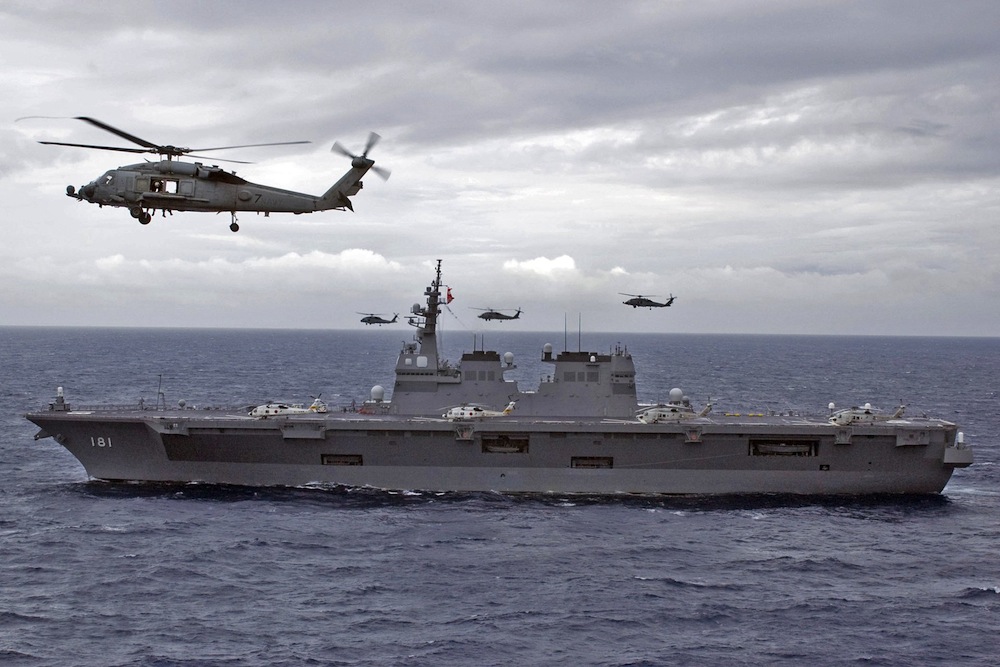 Though far larger and more capable than the proposed carrier of the 1960s these destroyers nevertheless are only a stopgap design. Since Japan cannot possess aircraft carriers the country needs to build the very best destroyers it can get as compensation. Thus the next class designated "22DDH" will be a bit larger....Actually they'll be about 19,000 tons standard and 27,000 tons fully loaded.  That's about the size of a Yorktown class aircraft carrier.

Here she is drawn to scale with JDS Hyuga... 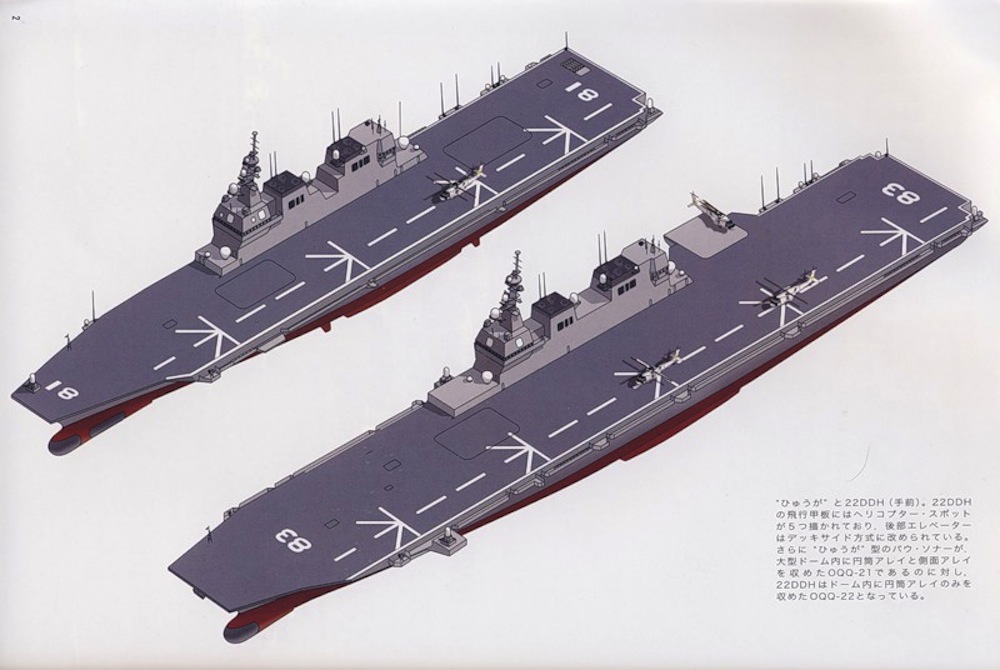 ...and here the new ship is seen in comparison to three historical Japanese ships: Akagi, Shokaku and Kaga. 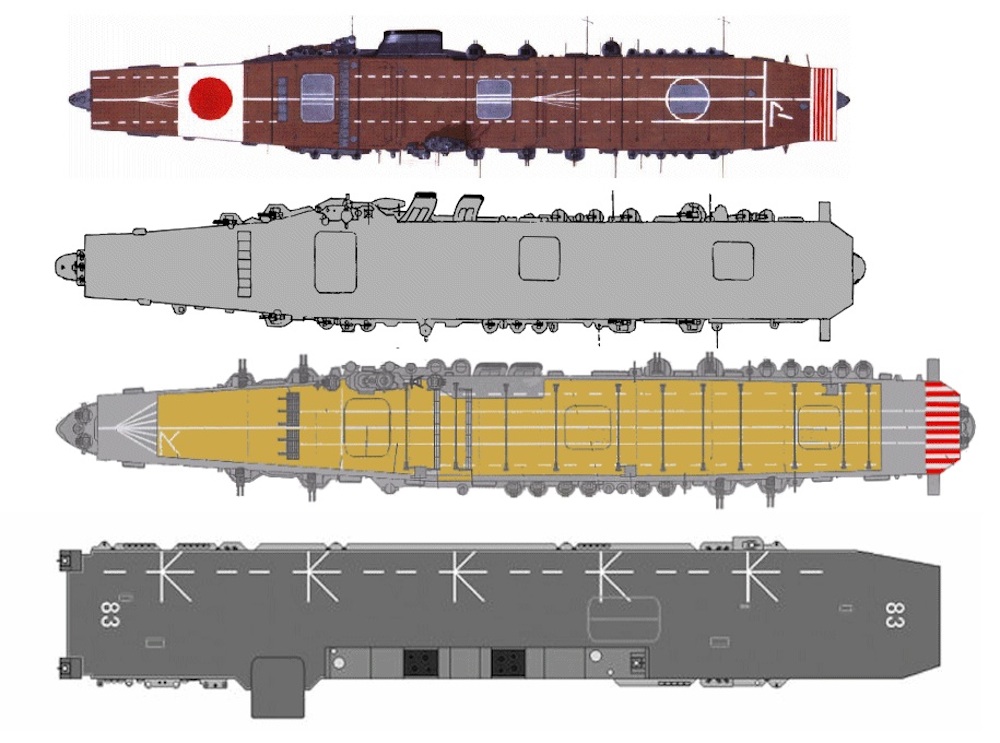 These ships will have, in addition to their missile batteries, 7 ASW helicopters in a VERY spacious hangar. In fact the hangar is about the size of that on an early Essex class carrier.  The ship will also carry several 'search and rescue aircraft'. This SAR wing will consist of V-22 Ospreys. However, according to some sources, it will also include F-35 Bs which no doubt will bring a smile to many a stranded mariner as they drop life rafts from their bomb bays rescue equipment compartments.  (I'm a bit skeptical of the F-35 reports, if only because the whole F-35 program is in disarray).  The ships will also be able to carry a very large number of Ground Self Defense troops for disaster relief. This is a useful capability as Japan is prone to disasters such as volcanoes, earthquakes, tsunami's, typhoons and Chinese nationals on the Senkakus

27,000 tons might seem large for a destroyer but that's the kind of inefficiency one gets when one decides to put a bunch of helicopters on a destroyer.

It's just a terrible terrible shame that the Japanese can't have any carriers.


*don't tell the Canadians that though.

1 Russian carriers were (or are, well, there's only one left now) also armed with missiles for some reason, even though they didn't need it politically.

2 Pete, the Russian carriers carried missiles for their offensive operations.  They knew that any airwing they carried would never be enough to go toe-to-toe with an USN carrier, so they decided not to.  The Russian aircraft would play interceptor to defend the carrier while it threw Sunburns at the Americans.

Muppet, the JMSDF should take a note from the RN and call them "Through-deck destroyers."

3 Honestly, I hoped for something less conventional from the Japanese. Like popping mecha.... ahem, drones out of giant torpedo tubes and recover them on an arresting net, ship with 2 smaller decks and roll-through hangar to service the me...drones.

4 Drones are still mecha, no?

Which is, in its own way, a really scary thought. Japan doesn't have a fixed-wing naval aviation program at all, right? So there's nothing to stop them, from the perspective of an internal military constituency, from implementing a naval drone air program...

By which I mean: the US is unlikely to institute a program to construct large numbers of air superiority drones because the current air superiority mission is held by the Air Force (terrified of the idea of their legions of officer-pilots being replaced by a few sergeants) and the Navy by carrier-group admirals (who are not likely to want to be reduced to drone-destroyer launch platforms as part of a battlegroup). With the services in opposition to the measure, it's just not likely that the funding would be devoted to the necessary development.

In contrast, Japan just doesn't have the second group at all, and air-superiority drones aren't really all that different from search-and-rescue drones (i.e. they are a drone with a radar and an "accessory attachment point that we're not going to call a hardpoint for public consumption"). So it would be relatively easier for Japan to gin up a drone-fighter capability, without the political mess that they'd run into trying to build a full carrier capability...

Maybe I'm just paranoid. Or more like, I don't actually have a problem with it either way...

5 The JMSDF took the DASH drones and made them a spectacular success. In the USN they were a fiasco.  This was in no small part because they had no institutional problem with having the drone pilots be drone pilots as their primary job rather than (as in the USN ) have the drone piloting be a collateral duty.


I'd not be surprised if the Japanese went into a different direction that is very drone centric. That may cause some problems for them as anything, especially something that takes instructions via wireless can be hacked.

I, for one, welcome our new mecha overlords...