We Ought to Name Them After the Days of The Week*
Wow! No less than SEVEN planets ranging from roughly Earth to Mars sized have been discovered in the TRAPPIST-1 solar system. No less than three of the planets are in the habitable zone!
All 7, at least theoretically, could have water on their surfaces, though on the farthest planet, any water would almost certainly be ice, and the closest are...borderline. However, at least one of the planets in the habitable region has tentatively been identifies as being of water rich composition (mentioned at about the 04:40 mark in the embedded video).
Note that NASA recently tightened the definition of Habitable Zone which effectively reduced it in width for any given star. This model does not take into account many potential atmospheric effects, but does account for other things. By the older, less restrictive definition (given the distance from the star and sufficient atmospheric pressure, could liquid water exist on the surface of the planet) Venus, Earth, Luna, Mars and Ceres are all in the habitable zone of our solar system. Note too, that under the new rules Earth is a borderline case.
Image via
The star is being described an ultra-cool-dwarf, which is NOT a charismatic little person, but a stellar spectral type classification (L-T) that has recently been shoehorned into the demarcation between red dwarf stars and brown dwarfs (which are substellar). The star is only 11% the diameter of the sun or about the size of Jupiter (though much more massive). The orbits of these 7 planets, therefore are pretty close together, kind of like the moons of Jupiter and Saturn, but they are much much larger. This means that...well...look... 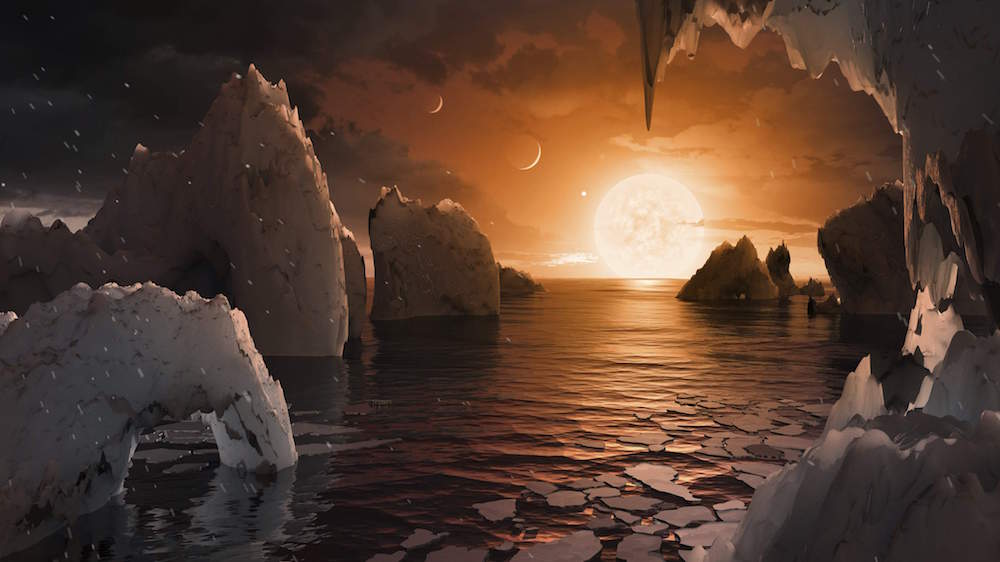 From the video, this completely hypothetical view from the fourth planet out is quite speculative and hopeful regarding the snow and water and transparent atmosphere. However, given the latter, is accurate regarding the view of other planets.The other planets, at certain times of year would appear as actual planets rather than wandering points of light. In some cases, planets in adjoining orbits would appear bigger than the moon. The planets are all closer to their tiny, cool star than Mercury is to ours.
Interestingly, while ultracool dwarfs are red stars, that is because so much of their emissions are in the infra-red. Their VISIBLE light from them (or red dwarfs for that matter) would be perceived by us as very similar to our own...basically white-yellow as all the colors are mixed together unless refracted, for example by a prism. (Earth's sun is technically a green star). There are some things missing from their spectrum though, blue and some greens are absent. Thus, optimistically assuming a Nitrogen atmosphere like ours, the nitrogen would not lightly reflect the blue as it does here, thus, the daytime sky would not be blue, but would be transparent. So, if not looking directly at the star, on an optimistically assumed clear day one might well see a black nightlike sky and even see stars (and passing planets) at noon if one was not looking at the star. Green plants, oceans and rainbows would look...different. 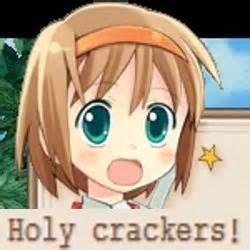 I guess Trappist-1 really IS an ultra-cool dwarf! 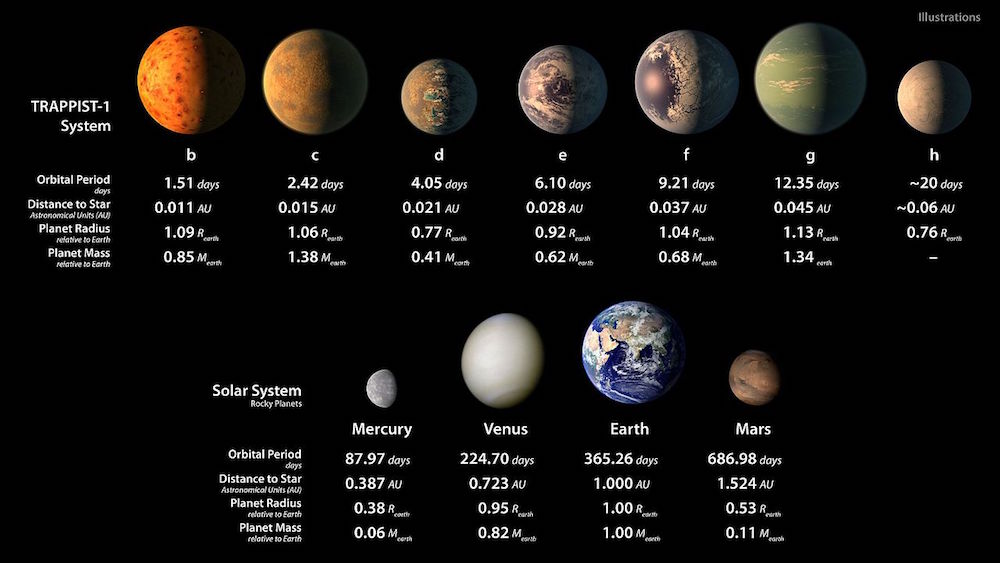 Image from Wikipedia's Trappist-1 entry.
They are remarkably similar in size with much less variation than our solar system's rocky planets, ranging from a bit larger than Mars to a tad bigger than Earth. Given the proximity of the planets to one another (as little as 1.5 times the distance to the moon) and super short orbital periods (years on these worlds range from 1.5 to 20 DAYS) they would periodically subject their neighbors to tidal forces, that would provide tides in optimistically supposed seas and perhaps facilitate magnetic fields on the smaller planets in much the same way that Ganymede has one. This would greatly increase the possibility of life. Finally, since we're engaging in highly optimistic ponderings, such tidal forces might interfere with and prevent the assumed tidal locking.
Given current technology, 40 light years might as well be infinity. We could, if we went balls-out and spent something like the budget of the USN for a decade or two, we could make something related to an Orion type starship that could make 5-10 percent the speed of light (max) which would get us to the nearest star (ProximaCentauri at 4.5 light years)  in 45-90 years. The Trappist-1 system is a tad under 40 light years away and would be 400-800 years...which is a rather unsatisfactory commute. Still, this discovery is beyond cool and there is the infinitesimal possibility that something like the Alcubierre-drive might be possible and get developed.
Here, one of the Brickmuppet's Crack Team of Science Babes  takes a moment to show off the 'work" she's planning on getting done in the hopes that she can one day see this wonder up close. 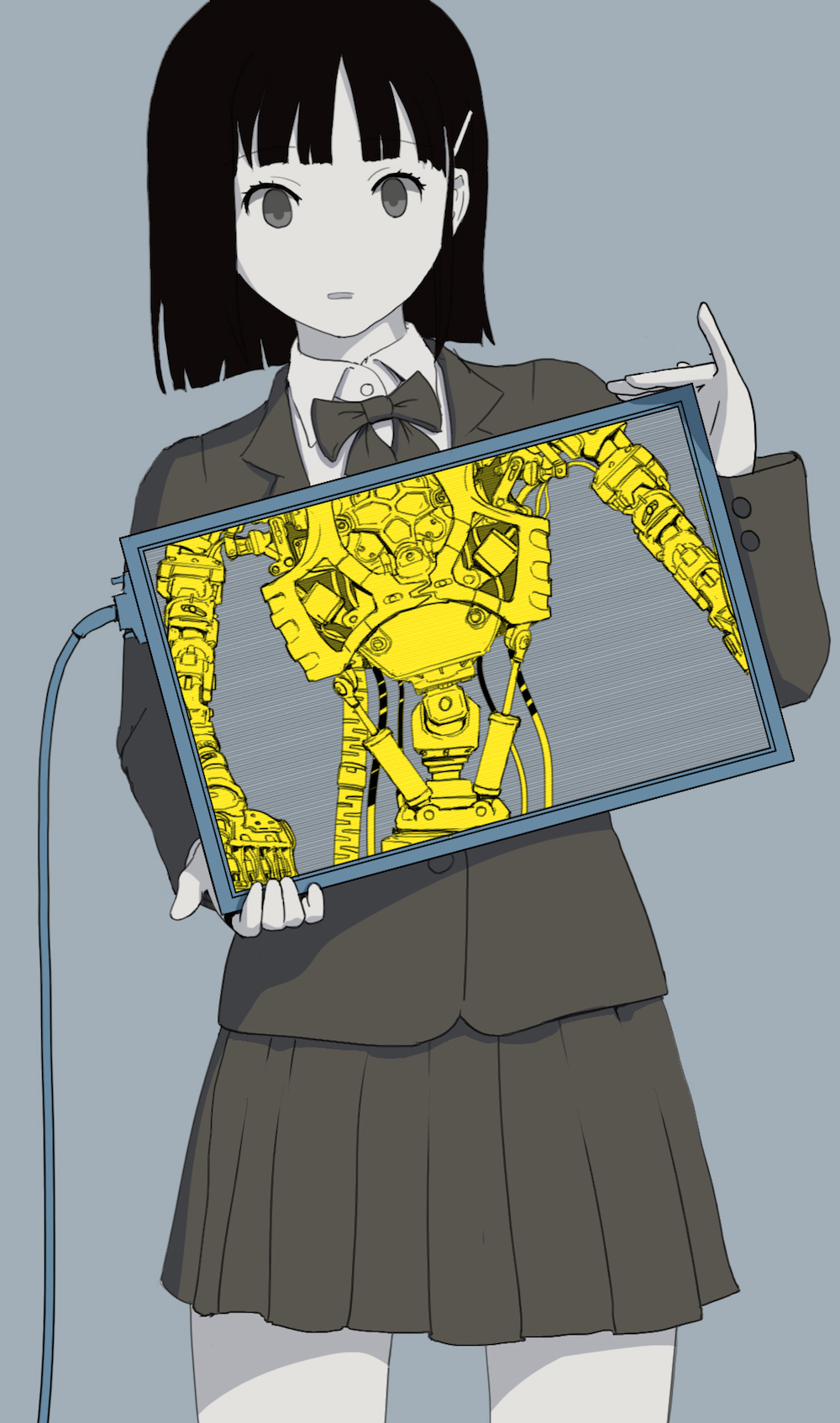 Art by Sukabu
There's more on this here, here, here, & here.
*There is symmetry in this: The days of the week actually were named after Graeco-Roman astrology, specifically, the 7 classical planets (which included the sun) themselves then named after the high ranking members of the Roman pantheon.

1 Ever since they began using the transit method, we've been discovering scads of extrasolar planets - many of them down to the size which we think makes them likely terrestrial planets. Very cool stuff.

One of the interesting things about the majority of them (discovered by the Kepler telescope) is that many of these M star systems or red dwarf systems seem to have tightly packed planetary systems. Numerous systems have been discovered with very crowded planetary systems. It used to be thought that due to the relative narrowness of the habitable bands in cooler star-systems, that these were unlikely places to find Earthlike worlds. It now seems that they're every bit as good a candidate as hotter G and K stars (and far more plentiful besides).

2 Sets of seven open many naming possibilities.
The Seven Deadly Sins. Gilligan's Island. The Seven Dwarves.
I'm sure there are others.
Regarding travel times, I kinda *like* the idea of being restricted to STL. Having Earth and her problems several centuries away means not having to deal with the crap the homeland would otherwise try to impose.
Of course I'm still hoping for mass-produced <a href="http://www.iase.cc/openair.htm">Bishop Rings</a> in our Solar System as an interim structure. Every little interest groups could have its own India-sized mini-planet to live on and work out its issues.

Q: "How are we going to call them? Trapists, trapistyans, trapistoids?"
A: "Whatever, as long as it's not `my master'"

4 Well, Pete, that works not only as a joke, but as a prolog to an epic sci-fi war story (as most Russian humor does).
I further applaud you for your restraint in not taking the low road and making some tasteless joke about the system's inhabitants being traps. 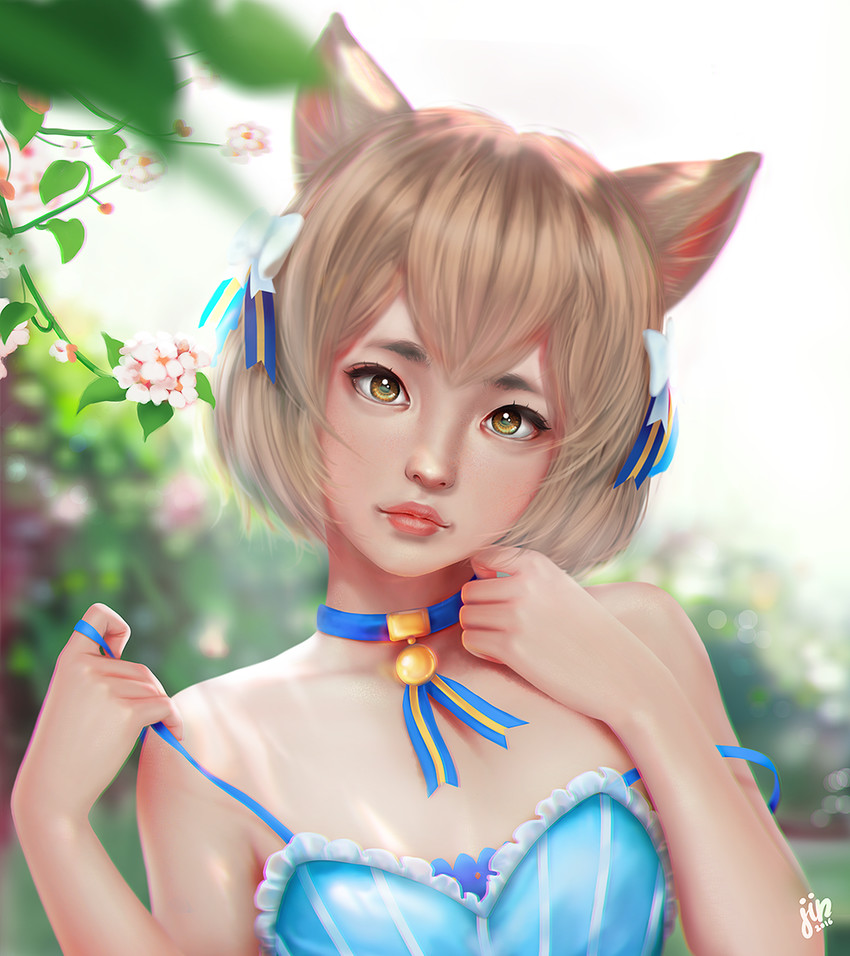