Various Things of No Importance Crunchyroll is holding a sale this weekend and while I generally do not do fannish accouterments any more, I figured I'd peruse it and check out their DVDs and look for gifts to.... 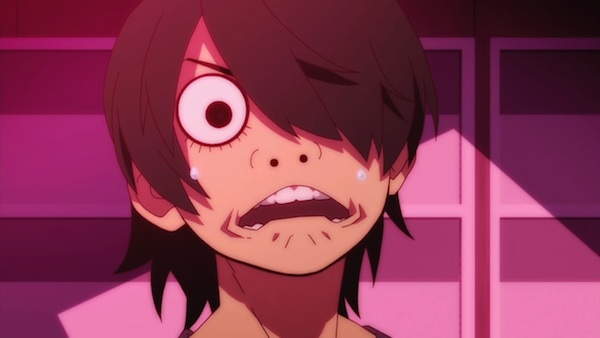 79 Dollars for a nendroid!!?
Well then.
It seems that my absence from the weaboo brickerbrack market will persist for the forseeable future.
Also regarding Crunchyroll, I seem to recall that they had announced that they'd be carrying that show about the Teenaged Twintailed Transylvanian superhero, yet it's nowhere to be seen as of the end of November.
Similarly,  Amagi Brilliant Park and the very intriguing 7 Deadly Sins do not seem to have a legit release.
Well, even with three of the shows on my watch list unavailable and  RWBY finished, I still have Log Horizon  and the Fate Stay Knight remake, both of which which I'm enjoying. The latter is, surprisingly engaging,  even for those of us who saw the original, as it has managed to have numerous surprises.
When Supernatural Battles Become Commonplace looks interesting but I haven't watched past the first episode. This is in part due to time constraints and in part to to a 'harem' vibe I got from it.
SAO 2,  a horror show called Parasyte, the oddball looking Gugere! Kokkori-San, and possibly Wolf Girl and Black Prince all look look to have potential as well. While some of them will surely suck, this may be a red letter season. I normally can only find one or two shows to watch. This season there are 8 that I want to see in addition to the two I'm watching. My lack of time and the vagaries of licensing rather than a dearth of non-crepe seem to be the bigger issues this year, which is a welcome if frustrating development.
One may wonder why I, a 44 year old man, gravitates towards shows for Japanese teenagers and 20 somethings, especially when such a small percentage of said shows are watchable. Well, I fiond that the suck ratio is actually better than the domestic alternatives. Also Japanese writers by and large don't hate people like me. OK, I don't know that and probably some of them do.
But they usually don't make a special effort to sneer at my country unless they are Studio IG and they don't display utter contempt for me unless they are Gainax...and even in those two cases there will often be a good story involved. It's also easier to find shows in Japan that value decency or are simply whimsical escapist stories that are not interrupted by a PSA for the writers to tell people like me how much they wish we were dead, or institutionalized, or even worse.
This is probably just because we are not the target audience but I find it congenial to watch shows that are not shrieking hatred at the fact that people like me exist.
On a completely unrelated note I'm sure, I found Dr. Who to be decidedly sub par this year.
One Meta note;
As I just deleted 13 pages of pulled pork shoulder from my comments dashboard, I will probably re-institute comments registration by the end of next week.

(Japan typically only does one production run for models, and if you don't get one from that, you can expect to pay above MSRP from anyone who still has one for sale, so maybe it was a situation like that?)

4 Your reasons for watching anime sound a lot like my reasons (and you're still younger than I am...)

5 Crunchy has English rights to Twintails internationally except U.S., so that Hulu carries it here. At least such is the theory. We could ask Mr. Pixy to check down under if they actually stream it there.

6 "I found Dr. Who to be decidedly sub par"
I actually--mostly--liked the new doctor best of the new series so far.  They've tamped down on the over-the-top camp and silliness, and been a little less "save the universe of the week".

7 I actually like Capaldi, and I enjoyed most of the season, but the bit with the unbridled hatred of servicemen being presented as virtue...well not so much. I thought the season was working up to a refutation of that notion, but the finale not only doubled down on it but threw in a dollop of America hating as well. The finale also pushed the idea that soldiers are tolerable mainly if they are dead.

Ah.  Yeah, I agreed with that, but perversely, it annoys me less than a number of things that don't come to mind right at the moment.  Oh, like the fundamental unseriousness of the new show in general, particularly 10 and 11s dilettantishness, and so on.

10 The season finale could have been amazing, but it failed to be audacious enough.  Or at all, really.  In the end, it was just okay.

11 Pixy--which show, DW or RWBY?  Either way, what you said is accurate.

Mauser:  I find that with the exception of the almost frothingly-rabid soldier-hatred, I can cope with Moffat's hates better than Davies' loves, apparently.
Most of the rest of the stuff I tend to chalk up to "it's like that in all the handful of modern British TV I watch" and mostly ignore it.

12 If they hadn't promoted it so heavily as a Bold New Thing, this season would have passed as a baggage-clearing introduction to a new Doctor, with "throw it at the wall and see what sticks" character-building.  The other big mistake was structuring it around Missy.

Ugh.  I could completely have done without her, although tbh I thought she worked very well in the mold of the original-series Master.  I never liked the new character--too much of a buffoon for my tastes.

14 Well, I could have done without the "leaps tall buildings in a single bound super-cannibal" aspect of The End of Time, but otherwise I thought John Simm worked well against Tennant's Doctor. Admittedly, I was looking forward to seeing Derek Jacobi's take on the role until they pulled the surprise regeneration, but they clearly wanted someone with a more contemporary feel.