Today was the Day Today I saw the doctor and got some news. For those uninterested in my banal existence, here is something completely different.
A good end. 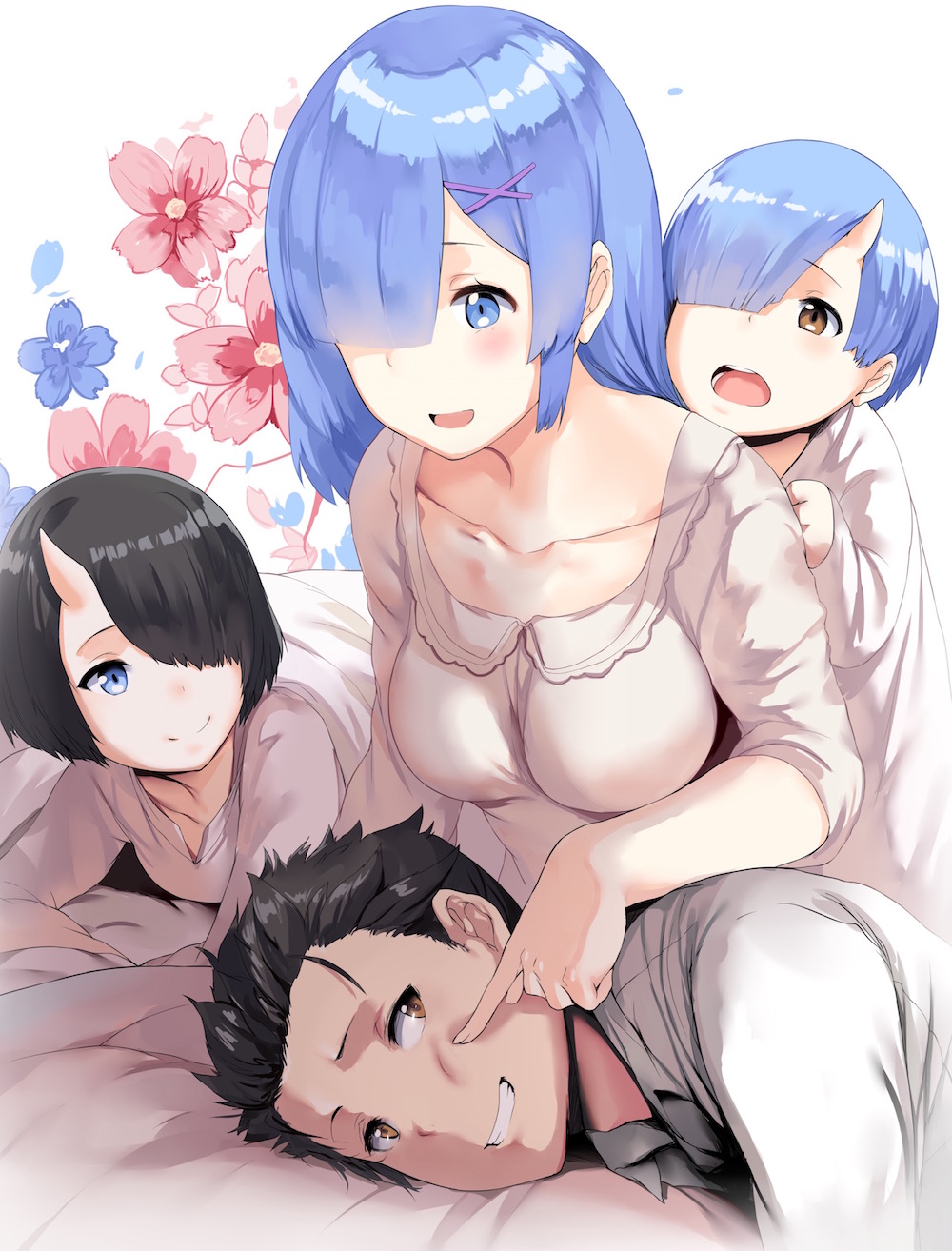 Art by Hews Hack (totally NSFW)  "We would arrive in Kararagi, and rent a place to stay.
As long as we had a home and work, we would get by somehow...
Fortunately, thanks to Roswaal-sama, i have received an education, so i think i could
easily find work, even in Kararagi.
You might have to either look for manual labor or take care of things around me.
Once we had a stable income, we could look for a better place to live.
In the meantime, you could study or perhaps a year, so that you can find a decent job, until you can actually work.
We would work together...
And once we had enough money, perhaps we could buy a house.
Maybe we could even open a shop. After all, Kararagi is a thriving commercial area.
I'm sure we could earn a living on one of your fanciful ideas.
And once our jobs were on track...
Um, it's embarrassing to say, but we could have a child.
It would be half-demon and half-human, so I'm certain it would be feisty.
Whether we have a boy or a girl, twins or even triplets, I know they would be adorable.
I'm sure it wouldn't be all fun times.
And not everything would work out as I imagined it.
We might have only daughters and no sons, so you might not feel very proud of your family.
But...Even when the children grow and reach the age where they start to treat you coldly, I shall still be on your side!
We will be famous in the neighborhood as a couple of old lovebirds, as we take our time spending life together and growing old...
I would feel bad for doing it to you, but I would prefer to die before you, if possible.
I want to die quietly, lying on our bed, with your hand in mine, surrounded by our children and their children.
To say, "I was so happy," as you all look on..."
Well, after the unsuccessful surgery the other day I've had some....issues.
Sitting hurts.
Going to the bathroom hurts.
Moving hurts.
Laying down at certain angles, and standing, I'm OK with.
There is a plastic stent in my UT system keeping it from collapsing and disintegrating.
The spectacular bleeding tapered off Saturday night though.
I had hoped that I'd get that removed this week. Alas I leaned that my surgery had been scheduled for the 22nd of next month.
In the meantime I can't lift more than 15 pounds, can't sit in a classroom chair, and I refer you to the list above.
My reaction to this news was less than joyous and I inquired as to the possibility of an earlier surgery date. That's when I learned that my surgeon won't be back from vacation till then.
...
...
So I gritted my teeth and drove 35 miles to VA Beach to have a...face to face discussion...with the specialists and determine the earliest that I could realistically get my UT plumbing system fixed and be able to work. After some...discourse...on the matter, I got a different surgeon and the surgery date got tentatively moved up to the sixth which should put me back to work on the 16th.
This is (tentatively) vastly better than beginning the healing process on the 22nd but it still means I won't work for 3 weeks. It's tentative, because they have to determine Thursday If I've healed up enough to be operated on again so soon.
School looks like a lost cause at this point, though there is a slim ray of hope. I stopped by the Office of Student Outreach and spoke with various people, including the Dean and they are coordinating with the new surgeon on the wording of a letter that will either provide me with forgiveness for all attendance and deadline requirements  for the semester. Or (more likely) an administrative withdrawal, which will allow a tuition appeal.
Given that this was to be my last semester, this last option is most annoying, however, there is the slim possibility that I might get the attendance and due date forgiveness. As I understand it though, this is a longshot that requires the Department heads all agree. I've missed quite a bit of class time, which is particularly important in the lecture heavy classes and Japanese.
Oh...
The state inspection on my vehicle was 1286 dollars.
ASIDE FROM THAT....
Things are going OK. I will have to get a counseling appointment and find out If I can graduate in the Fall or if I'll have to spread my classes over 2 semesters.
I'm set up to retire in August, but I can push that back a few months if necessary.
The good news, is that even if I do have to drop my classes,  unlike several other semesters where I had to drop out of school (for instance to take care of my parents and grandmother), I won't be on the hook for any money.
But enough of MY first world problems.
I've still got a job.
Cooks Country fired Christopher Kimball!

1 I gather the board pushed him out of the company in late 2015 because they wanted fresh blood, then sued him when he launched a competing magazine/site/etc in late 2016. I'll refrain from using the first descriptive phrase that comes to mind, given your current condition...

2 The kids have one horn each?  On opposite sides?

3 RickC, this actually makes sense, given her backstory.  Oh, the opposite sides bit is a touch over-the-top, but both having a single horn pulls nicely from the source material.

4 Well, a lot of that stinks. But the rest is not as bad as it could be. (Which is not saying much, but some days, that has to be enough.)