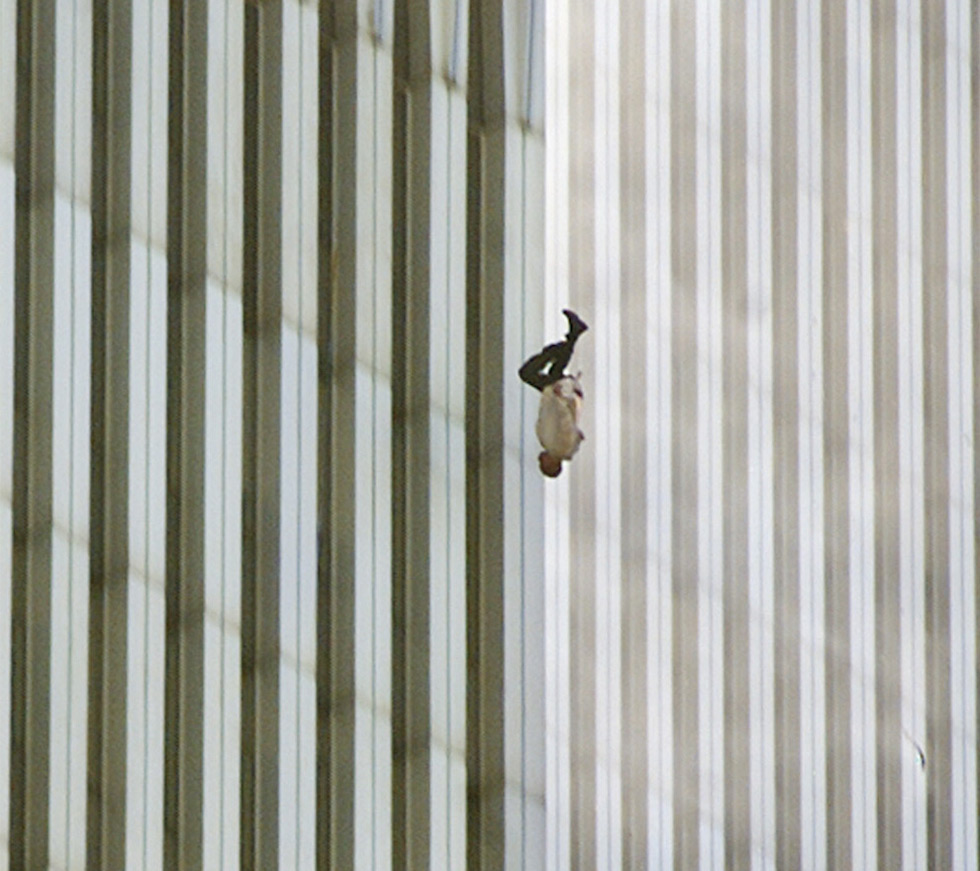 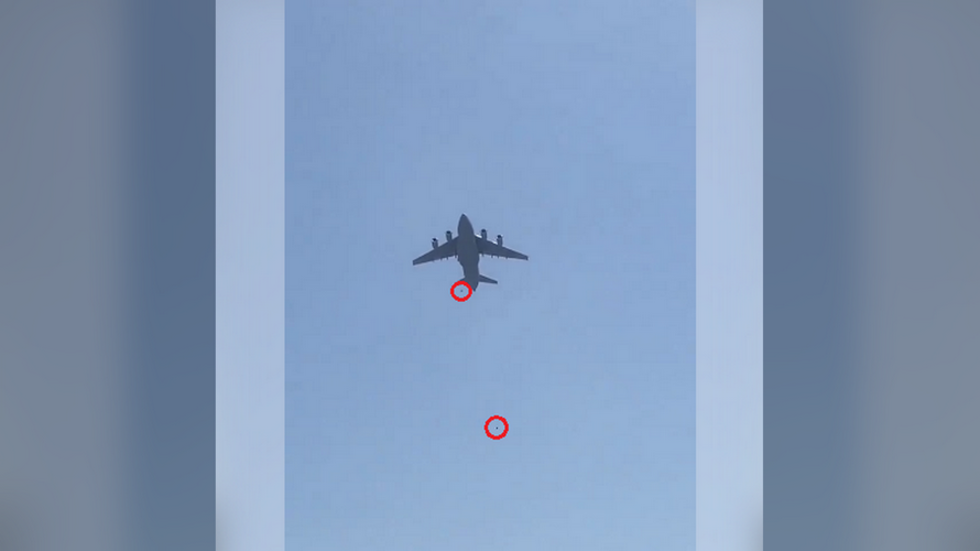 .....
20 years on, the verdict is in.
They won.
2973 people were killed on  that  day 20 years ago. A further 2461 military personnel were killed in Afghanistan prior to our disgraceful and inept pull-out earlier this month. Those totals do not count the thousands who died later or those who succumbed to the after-effects of the asbestos cloud that poisoned lower Manhattan  in the wake of the towers collapse, the thousands who died in the ostensibly related adventure in Iraq, the multitude of Peace Corps and U.S. aid workers who died in Afganistan, including one killed last week via U.S. drone strike, those who succumbed to their injuries after being evacuated out of the country, nor does it count the servicemembers who are killing themselves now as they watch what is transpiring, and it doesn't touch on the vast numbers of innocent Afghanis who died either because they were caught in crossfires or suffered retaliation from the Taliban.
The Taliban, who hosted and gave aid to those who struck us on that fateful September day now own the country. They are proceeding to bless the nation with their own diverse and exotic take on gender relations policy..
...and take inventory of the cornucopia of armaments that our leadership has blessed them with. 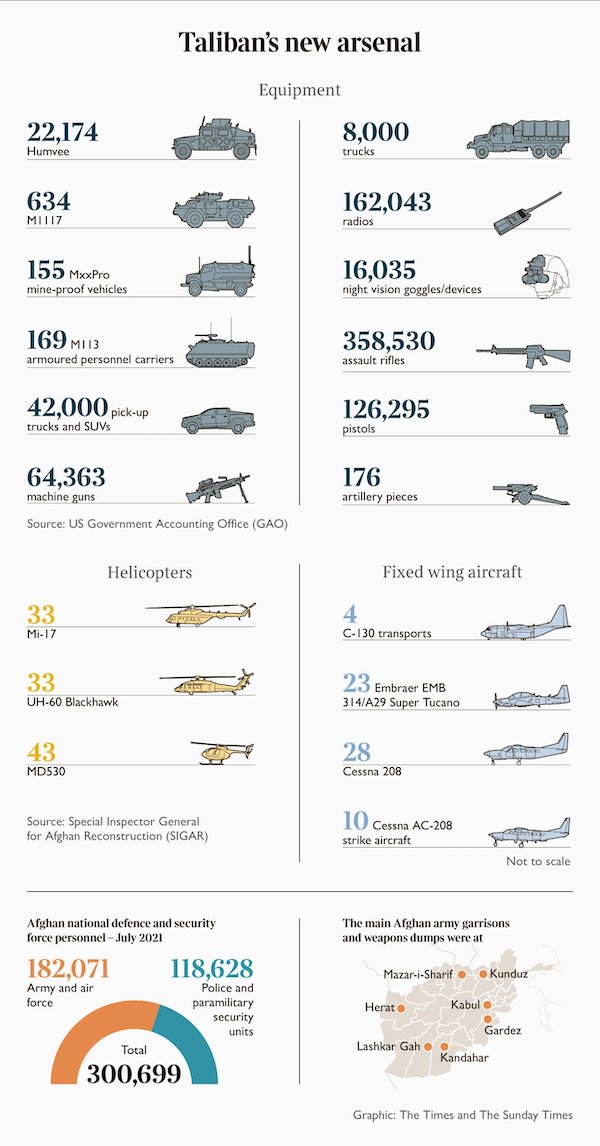 Graphic via the London Times
The Taliban are Islamists, have a history of funding and giving aid, spiritual, financial, and logistical, to terrorists Now they have not only won, they are armed to the teeth with our guns.
Adding to our government's complicity in this fiasco is the fact that among their leaders is at least one who was freed from Guantanamo Bay to buy the freedom of a traitor.
Oh well. At least there aren't any mean tweets.
Like Polyphemus, we have lashed out destructively and violently, but blindly and in for all our efforts appeared impotent. But unlike the mythical Cyclops we have actually enriched our tormentors.
Given the money, blood and effort put into the Hindu-Kush for 20 years the towns of Afghanistan should look today like the pictures of Kabul before the Soviet invasion.
Given the assumption and conceits of those who turned a punitive expedition into a Jacobin effort at nation building......Assuming a 12 year education, the schools of Afghanistan that we spent so much to build  should be putting out their 8th class of high school graduates educated in math, science and civilized mores. However our leadership cadre has no firm belief in civilization and the schools which so much money was spent on seem to have done very little.
Until this year, despite all the missteps by our feckless leadership class, Jihadist political islam had been seen as a spent force. It was broken and scatters mainly by Trumps demolishing of ISIS in Syria and the steady and ongoing French efforts in Africa. However, many countries, including most NATO members and many Muslim majority nations had joined in driving jihadism into irrelevancy. There have been but a few successes for islamist movements in isolated backwaters, and while the danger of these movements has been real, ISIS, AlQaeda, Abu Sayeff  and BokoHharam were but husks of their former selves.
Now however, radical Islam has been give a massive shot in the arm, and ironclad legitimacy in the eyes of its formerly demoralized followers. Quite aside from the material benefits the kit we left behind will provide them, the morale boost is going to supercharge the until recently moribund movement.
On the other hand the cowardly and venal way in which we left the arena has alienated or demoralized our allies and given our enemies confidence that they can act against us without fear.
This was all unnecessary. There was a plan in place during the previous administration to pull out and leave a small counterterrorism force back in March, when the Taliban would have been hobbled by the weather. Our current leadership chose to sneak out unannounced leaving our allies in the lurch and kneecapping the Afghani army.
The damage this has done to us and our interests is as Brobdingnagian as as the aid we've given our adversaries.
As we commemorate this 20th anniversary of the attacks, we lie prostrate in total defeat at the hands of those who helped perpetrate them. And we still have people over there who were abandoned by our own government both U.S. citizens and former allies. All the while the exquisitely credentialed careerists who perpetrated this pat themselves on the back.
The government and ruling class that perpetrated this unnecessary self-own has shown that its enemies are not our enemies.
This fiasco will likely have terrible consequences internationally. But I fear this will be more immediately felt domestically.
I am so angry and saddened by this fiasco I cannot adequately express myself. But my frustration and despondency are vanishingly irrelevant compared to the momentous calamities this fuck-up will precipitate.
There's more on this and intertwined sub-optimal current events by people who can write well here, here, here, here and here.
UPDATE: Pithier version of my point here.

1 Akshully, it is simply that the senior Democrats are evil, have always been the enemies of Americans, and the Democratic Party has for over a hundred fifty years had a corrupt institutional culture that routinely practices tactics that should put it beyond the bounds of civil politics.  Those since FDR who have prospered within the Republican Party have largely been inclined to turn a blind eye to this, where they are not actively complicit.

Note, the regime that did this does not see it as a humiliation for them, they see it as a way of humiliating /us/. Obama is a narcissist, and if you are not familiar with those, you are underestimating his distress and rage at American blacks and whites for not starting a race war on his schedule. As for the assets of the PRC, PRC interest is in humiliating us, because of their own internal stability issues.

They are going to war with the American people anyway, but this may be 'kill the chicken to frighten the monkey' thinking.

What we have here is a profound failure of the American cultural consensus on peace between religious sects; That peace does not and has never held with the followers of the evil religion of communism.

It is simply that Thomas Kratman saw things all too truly when he wrote Caliphate, and put words into the mouth of his backstory antagonist Pat Buckman.

Wake up America, it is time to put our own house in order.

However, unlike the literary Buckman, we may still be sane enough to remove those who wish us harm from power, /without/ destroying the Republic.

Very few of even the actual people who voted Biden are on board for this war against Americans.  So, they don't have the balance of force to make it happen.  They are relying of the faint vestiges of institutional prestige, even as they waste more of that prestige on vicious moronic nutjobbery.  We win, they lose, and we perhaps win so easily that we do not need to pursue all former adversary forces to complete destruction.

2 You know, Taliban was ready to give up Osama bin Laden to us. They only asked for it to be done through another country. But Bush administration said now.
Even so we should have been out of Afghanistan in 2006. They didn't win, we lost, with full foresight.

3 I am pretty sure the Taliban was never seriously contemplating surrendering bin Laden and his Al Qaeda associates et al. even after it became plainly obvious that they were guilty as sin so that blind people could see it.  It did not prevent the Taliban to try and play games with offers of this or that that were as serious and well intention as the offers of cease fire and negotiations that the North Koreans and Chinese extended during the Korean War when they want time to prepare for the next offensive without getting beaten by US firepower, i.e. simple stalling tactics.