She Floats! USS Zumwalt, the first of a new class of experimental destroyers has been launched. 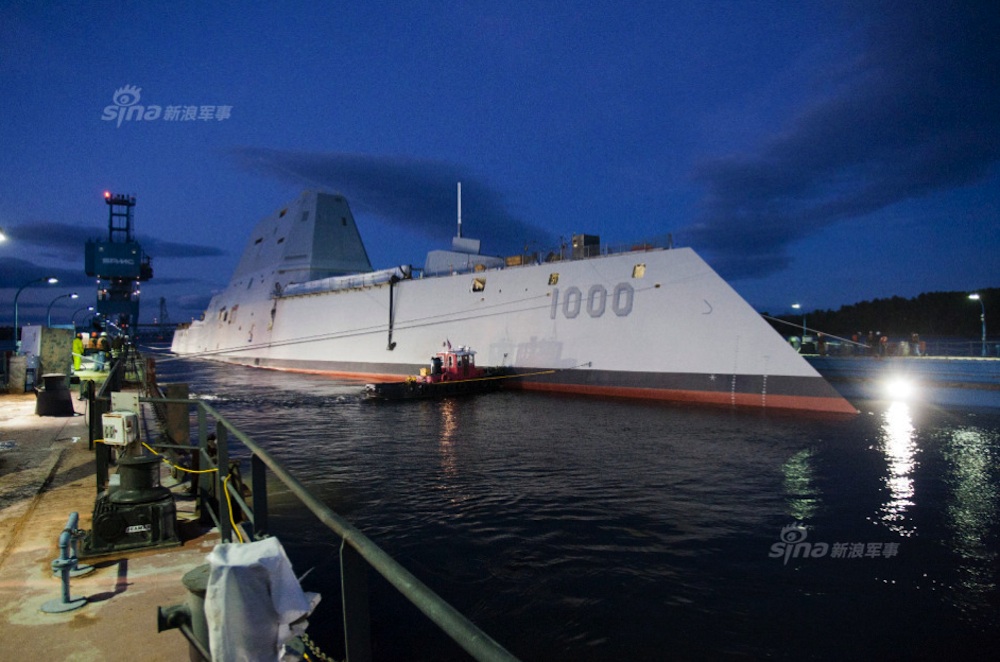 This didn't get a lot of coverage here but the Chinese are sure interested.
As per giggle translate of the Mandarin:

In other words, this milestone slipped under the radar due to the vessels inherent stealthiness and  the fact that there was no launch ceremony for a first in class warship....but mostly the latter.

Dude...they had launch ceremonies for sub chasers in WW2. This was just a gesture of contempt.

As to the ship itself there are a lot of criticisms floating around about the design, ranging from its tumblehome hull form (which doesn't have as much reserve buoyancy as the flared hulls of the navies current destroyers). There is also concern about the superstructure, which despite being an advanced carbon and epoxy reinforced assembly is still...balsa wood.

Although classified as a destroyer the vessel is as big as a Baltimore class heavy cruiser, and seems optimized for shore bombardment. This makes it more of a monitor than anything, meaning it's really a replacement for the battleships. While the vessel doesn't have an armor belt per se its shell plating is 20mm thick and it is reportedly quite strongly built. The propulsion system is an advanced gas turbo-electric system that produces much more available electrical power for the electronics system. This will also make the ship quite quiet. The strange, 19th century looking hullform is designed for maximum stealth.

The ship carries 80 missile tubes as opposed to the 96 of the current destroyers, but these are the Mk 57 launchers which are much larger and can handle bigger future missiles. The ship also has two 155mm (6.1 inch) guns which fire shells weighing 200-225 pounds depending on type. This is as heavy as most 8 inch shells. It can lob guided rounds 100 nautical miles and the 200 pound unguided shells 24 nautical miles. DDG 100 has extensive helicopter facilities aft and a large flex-deck with aft launching for small boats.

The criticisms notwithstanding, this ship and her two sisters are experimental vessels testing out a great many new ideas and weapons systems...the stealthy hull form and composite superstructure need to be tested in real world conditions and if they work out will represent major advances. Additionally this particular program represents one of the vanishingly few DOD programs that is on time and under budget. Given that everything about this ship is experimental except the anchor chains, blankets and urinals, that is no small accomplishment.

May the wind be at her back.

1 I remember reading somewhere that the armor on WWII battleships is so thick that the typical anti-ship missile can't penetrate it.  i.e in Exocet vs Iowa, Iowa wins.

In other defense news, a bit of kludging together hardware has produced something very interesting.  The army had a whole bunch of rocket motors from some kind of weapons system they can't use any more (I think it was some kind of cluster munition) but it would have been a waste to get rid of them. So Boeing won the contract to figure out a way to stick the rocket to the back of a Small Diameter Bomb, AND also hook the SDB to a winged JDAM system.  The result, a field-launchable bomb, no fighter-jet required.

4 I saw Russians joking about it already. This one's initial is "A.". Therefore, next will be James B. Kirk, etc. until James T. Kirk commands NC-1701A.