Reply Hazy, Try Again That is the answer to the following burning question: Is it Wrong to Try to Pick Up Girls in a Dungeon?
You see, they never actually addressed the ethics of the matter. Indeed no picking up of girls takes place in the dungeon (unless one counts physically picking up injured girls to get them to safety).
I'm going to have to go back and watch the whole thing again.

To my considerable astonishment though, the answer to the more relevant question "Was the show any good?" is "Yes. Definitely!"
As expected from the ending of the last episode, the finale is one huge fight.This could have been tedious, but the episode is crammed with an extraordinary amount of world building,  character development and genuine surprises.
This was a remarkably satisfying ending to a show that has been way more enjoyable than it had any right to be. 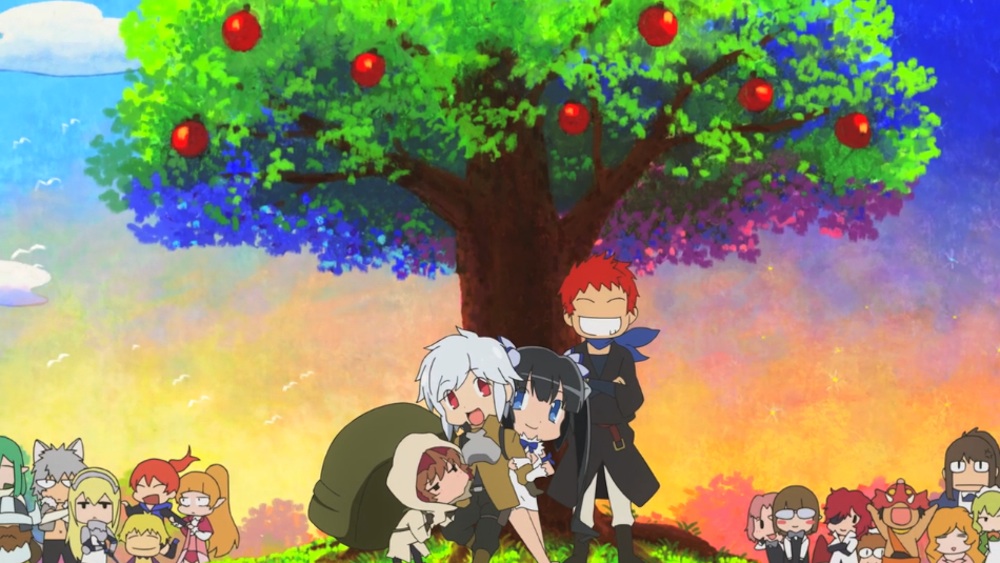 Towards the end of the episode the god Hermes, who has been sort of hanging around for the last two episodes, acting suspiciously, climbs a tree and gives a rather exuberant soliloquy which leads me to believe two things...
1: A sequel may be in the works.
2: This is not actually a harem show, or at least only secondarily so.
This is a Shounen show. The focus is on this guy who has a personality and is bent on improving himself. Now it certainly has some harem tropes... 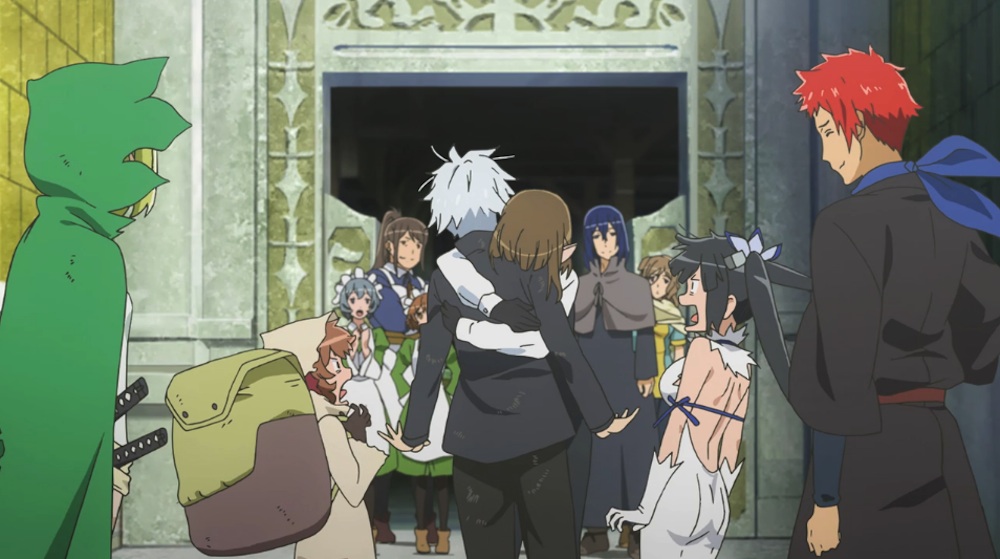 Rather a lot actually...
...but it does not revolve around some insipid nebbish muddling through life with delusions of adequacy who is improbably surrounded by babes. Rather, Bell, is certainly out of his depth, but he has a goal (OK two goals) and he is working to improve himself. This is a journey of the hero story.  The harem elements involve women who have a believable reason that they might give him the time of day (With the possible exception of Hestia, who, being a goddess of the hearth, domesticity, civics and fan-service, is obviously kind of slumming.) 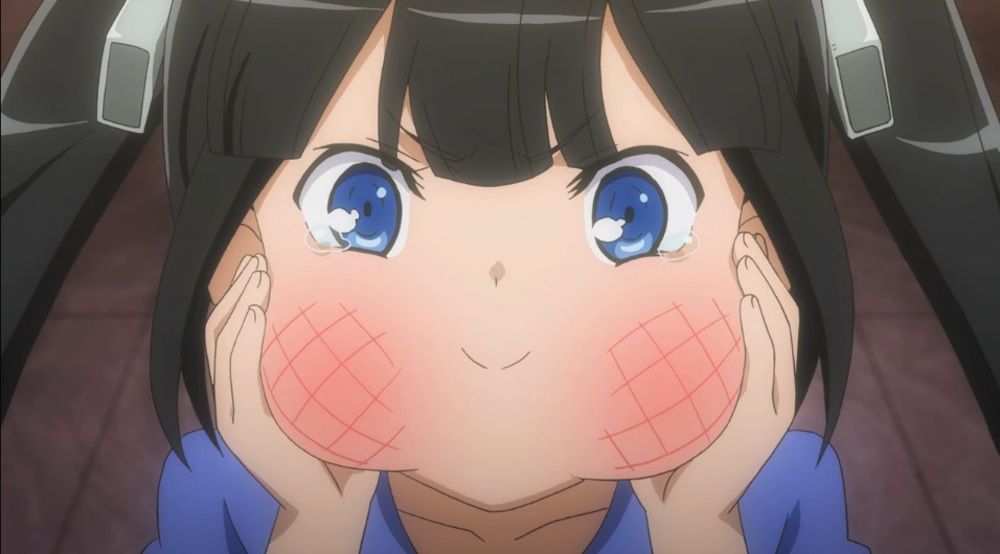 Or...not...
However, even in her case she recognizes that he is extraordinarily determined as well as being quite decent.
Syr, the waitress, was initially trying to coax him into the restaurant so she could get a commission... 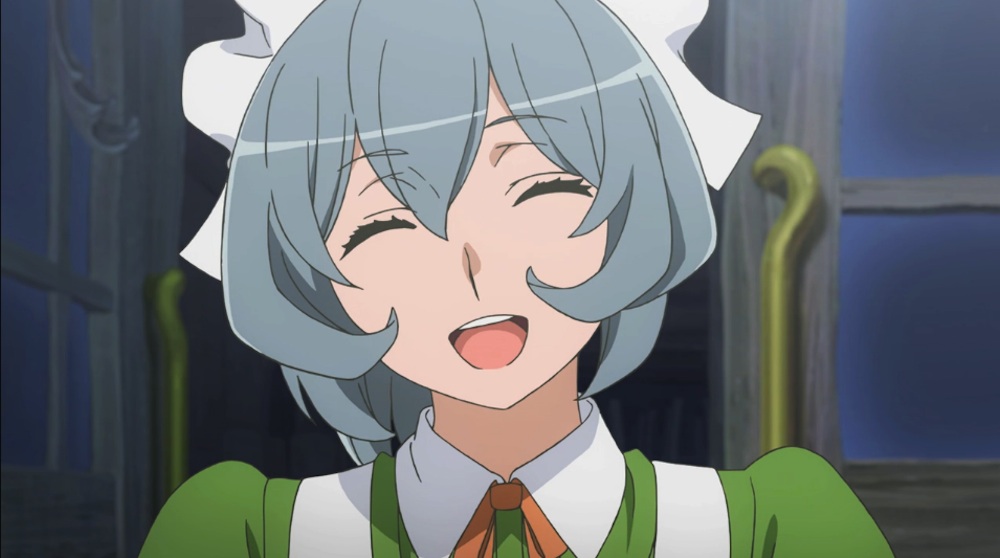 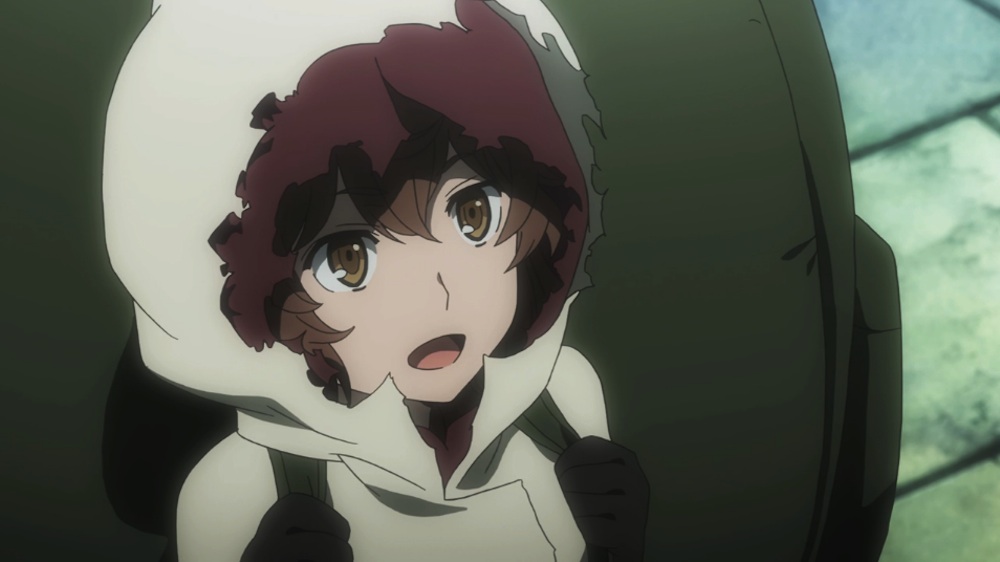 ...her backstory is as dark as they come...really cringeworthy in fact.... and he is the first person to treat her decently since her parents died. He also saves her perfidious tail, helps her get a new start, doesn't rip her off and as an honest business partner is making her rich.  To his credit he is not taking advantage of this rather broken girl.
No one else is really interested in any serious way.
Now Bell is carrying a torch for a young lady... 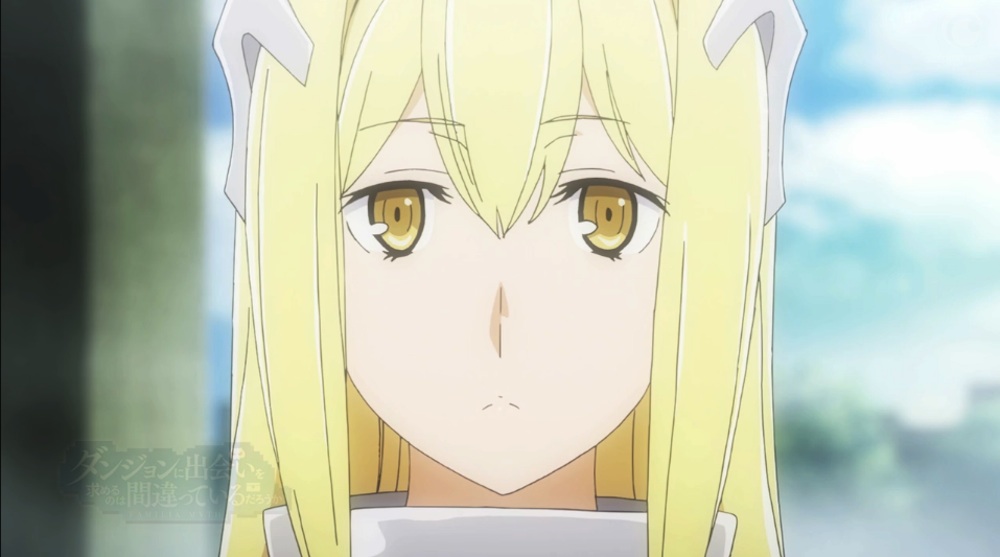 Stoic or slightly autistic? Who are we to judge?
Aiz Wallenstein is the warrior maiden who saved his life and in later episodes shows him shows him some professional courtesy. The way these little "famillia" cults of living gods work, her being in another famillia...well...inter-religious marriages marriages in this world are a good way to start wars.
That's largely the extent of the harem stuff...
There are lots of other female characters, several in healthy relationships and most of them quite interesting and well characterized to the point that most would not fit in any dating sim category chart. The show has remarkably well thought out, believable characters (ignoring the god/elf/hobbit/catgirl elements). The waitress and the porter are not really in the running. So if anything, its a triangle with one our hero is pining for and one he's oblivious to. It's not uncommon for Shonen heroes to have this sort of thing going on, but it is thin gruel; for a harem.
There is another Shounen trait in evidence. Bell has that special talent that shounen heroes tend to have, the McGuffiny thing that allows him to rise to the occasion, Early on it was established that he gained a special (albeit temporary) perk when he "leveled up". In the finale, it is revealed that (+6 to XP When Pining for Blonde Chick) may be tied to another perk he's not aware that he has. Bell is the grandson of ZEUS. On the one hand WooHOO! Genuine Greek heroic age hero material! On the other hand Hestia is...EWWW! Grand aunt!...Ewww again.

This latter point assumes that the classical Olympian genealogy is applicable. However, as we have seen, Edith Hamilton is an unreliable source for this show.
Furthermore, he has a small team that includes a couple of misfits, one of whom is a something of a ronin, and it's really about them playing D&D. This and particularly the rescue arc give it more of a Shonen than rom-com feel. I'm not a authority on the harem genre which I generally loathe, but this seems far more shounen than harem to me.
Finally, I enjoyed it and don't feel embarrassed about admitting which is a strong indicator that this is not a harem show.
This show is no groundbreaking piece of art, but its got a certain charm. It is surprisingly intelligent, especially if you are familiar with Greek mythology...and, er, even more so if you have have played D&D. I certainly enjoyed it way more than I expected, to the extent that I'll probably watch it again.
I'll be on the lookout for any sequels. 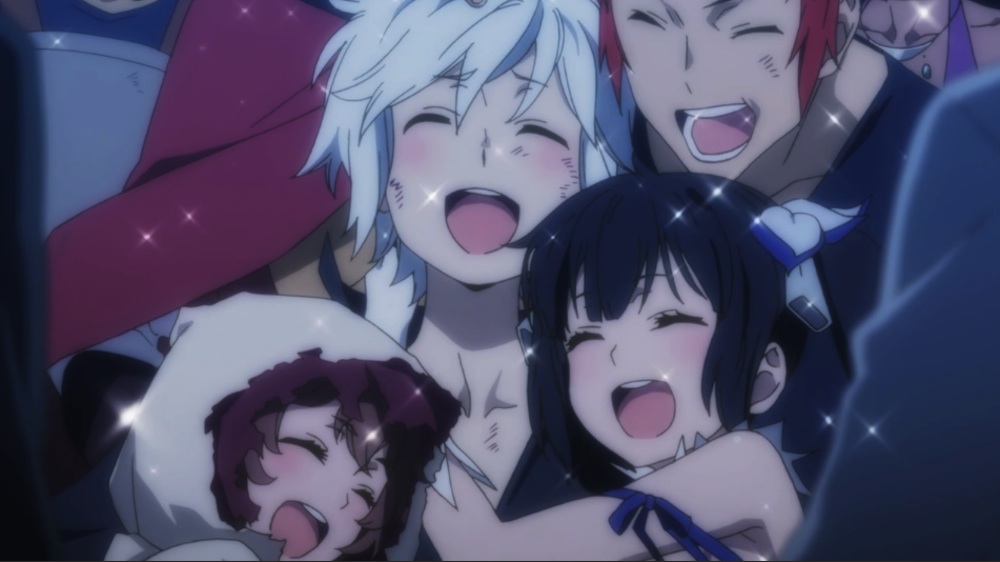 "YES! We got a good review!" "Yay! Now we'll be able to afford more Moon Pies!"
No magic 8 balls were harmed in creating this post.

1 It's a bit muddled in the anime, but Lili is definitely a halfling by birth, and a doggirl (Franco-Greekish 'chienthrope') by magic.

As far as haremettes go, the author seems to be going for the form but not the substance. More girls keep showing up, and for various reasons they're interested in Bell, but most of the competition is in Hestia's imagination.

2 Ah... Nod to form to get published..write about awesome D&D campaign instead.
I take it you've read the LNs?

3 Translations of the first two are out on Amazon US; I bought the Kindle editions. The story quickly zoomed past them, though, so I've only read up through Lili's arc. The rest is from scattered paragraphs on the wiki.