Pressing Questions There is this new show that , as near as I can tell, no one has gotten the rights to. It appears (despite having dubious art and being a shounen show) to be quite worthy.
Steven has been following The 7 Deadly Sins through his extensive network of underworld contacts and it does look like a hoot.
So, unable to watch it, I checked out the manga.
UPDATE: How can one screw up a manga review? One might have typos...people might disagree with one's conclusions...but to actually do the review WRONG is nigh impossible. Well, we here at Brickmuppet Blog pride ourselves in making the impossible happen....Responding to concerns expressed in the comments, I have flipped through the first volume and note that this online THING I blogged about bears very little resemblance to the dead tree edition of the manga, (which includes pigs, both talking and giant and seems to be much closer to what I've heard about the anime). I'm really not sure what the hell I reviewed here, but I SWEAR I read it..I've even got screencaps.
Perhaps it's a lost pilot episode issue...or something.
In any event, this thing exists and it might be of interest.
The questions at the end remain legitimate...well, actually there is probably debate on that too...
END UPDATE:
The premise is that some years ago in the Kingdom of Britannia (which is in or near the continent of faux-medieval-Europe), a group of 7 warrior adventurers consisting of swordsmen, wizards and even a fricking giant built a reputation of badass chivalry until they unexpectedly killed a whole bunch of innocents and began spreading seditious rumors such as "We was framed!" and  "The Holy Knights are riddled with traitors who are trying to launch a coup d'etat  and set themselves up as a Junta!" Well, the Holy Knights took care of this domestic terror group with extreme prejudice, reportedly killing them all (though there are rumors that one or more might have survived and fled to the wilderness).  This band of nefarious villains passed into legend as the greatest most perfidious and terrifying criminals in the history of the kingdom. Now they are boogiemen used to scare children and are referred to as The 7 Deadly Sins.
That was years ago, our story begins in earnest when a disheveled, filthy and generally odd young lady staggers into a tavern on a dark and snowy night, asks for information on the 7 deadly sins and precipitates a bar fight which results in the bar being closed and the paying customers turned out into the snow. 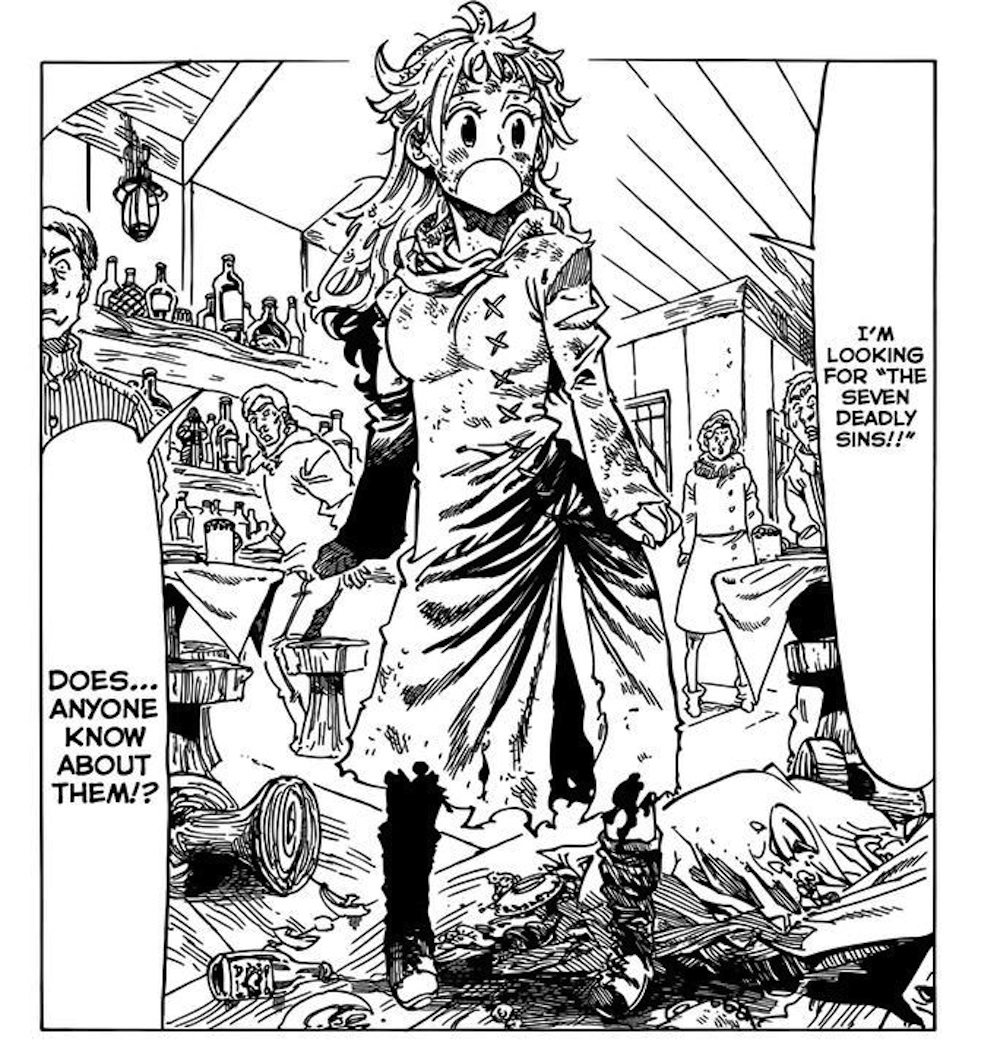 After some initial confusion the non-paying customer confides to the barkeep the events that led to her being in such a state. It seems that, in a completely unexpected development, the order of The Holy Knights suddenly launched a coup d'etat and set themselves up as a Junta!
Furthermore, this filthy, somewhat odd street urchin is actually the only member of the royal family to escape their knightly wrath, Elizabeth Lioness, the third princess of the kingdom. She has set out on a quest to put together a force to liberate her people. Suspecting (due to recent events) that the 7 Deadly Sins might not have actually been, strictly speaking, evil, and taking the rumors that some of them survived in the wastes to heart, she decides to search for survivors of that extremely powerful group to help her in her quest. Her task has been complicated by the fact that, being the THIRD princess she has not been groomed for leadership and, having had a sheltered life, she is ill prepared for survival on the lamb.  After getting cleaned up, she is mocked by the bartender, who insinuates that, being a bartender, and hearing things, he might be in possession of some of the information that she is looking for, but unless she can display that she has resolve he has no interest in giving her the time of day... 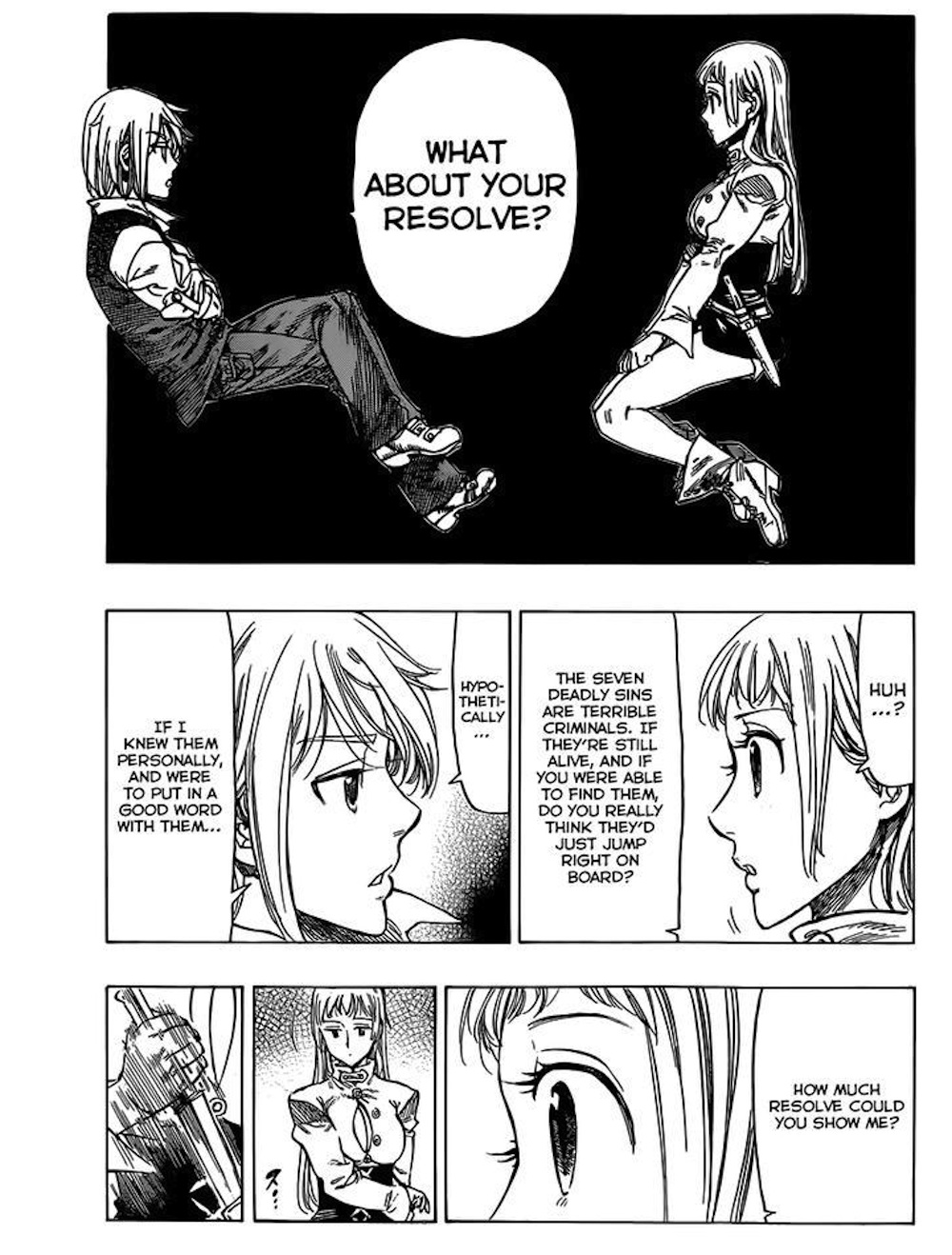 Well...It seems that our heroine is actually quite determined to save the kingdom and not in any way lacking in resolve. 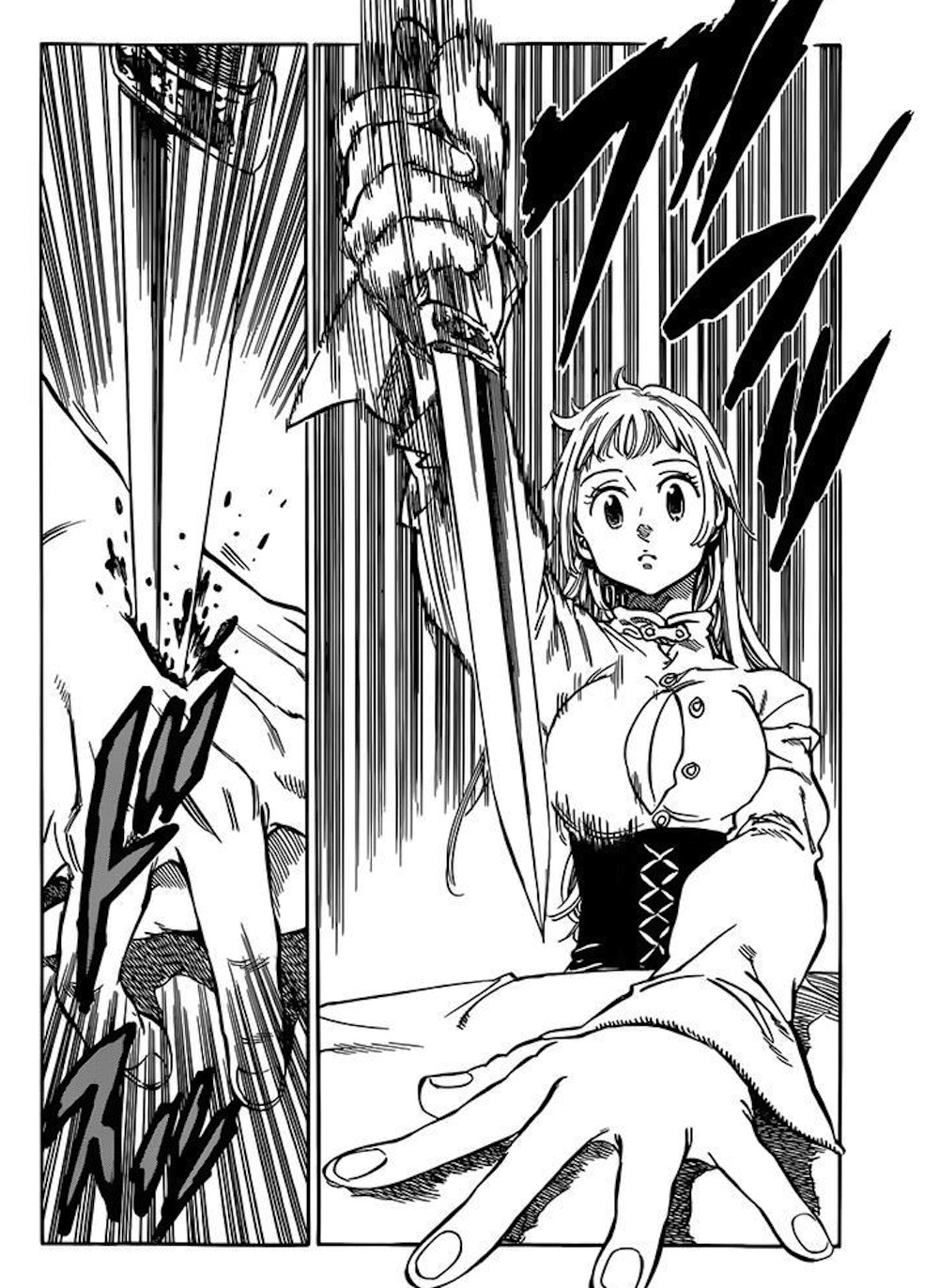 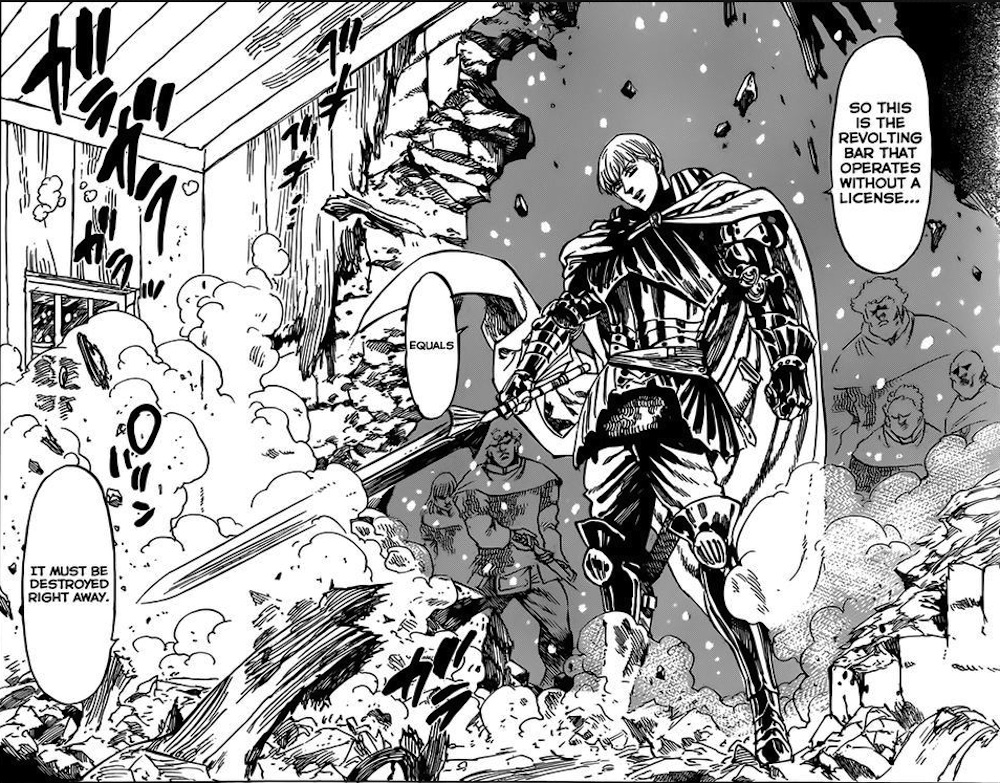 I'm with the government and I'm here to regulate!
It's the boss of the guys who lost the barfight! They were agents of the local EPA IRS NLRB Zoning Board ABC ATF EEOC Homeowners Association HOLY KNIGHT!
Well, the barkeep seems to be a bit more than an information broker. He is, in fact Meliodas, the leader of the Seven Deadly Sins...or at least he was before going into hiding. After the dust clears, the Holy Knight has been vanquished and Princess Elizabeth decides that this bartender is quite the useful ally. Due to her awkward circumstances, she takes the barkeep up on his offer of job as a waitress in his, ummm, traveling tavern, to pay for the damages she caused, build capital and network.
Hijinks ensue.
There are a couple of differences here between what I've read about the anime, most notably the lack of any talking pigs and it seems somewhat darker than the anime, based on descriptions. Still, it does look interesting and potentially fun.
I do have a few questions though.
1: Is ANYONE streaming this?
2:There is a character named Diane who joins the party later and has generated some...interest. What is that bludgeony weapon on here arm called?
3: Diane is described as being 35 feet tall. This begs the very important question of how short Princess Elizabeth is.
For example...

Here it appears that the silver fox princess is about 1 boob tall in relation to Diane. If Elizabeth were 5 feet tall this would make Diane 7 boobs tall, (which is really kind of disturbing to visualize actually), however, examination of a screencap maliciously pilfered from Steven's blog  is at a bad angle for our stated purpose, but is devoid of forced perspective issues and indicates that Diane is in fact between 12 and 16 boobs tall. 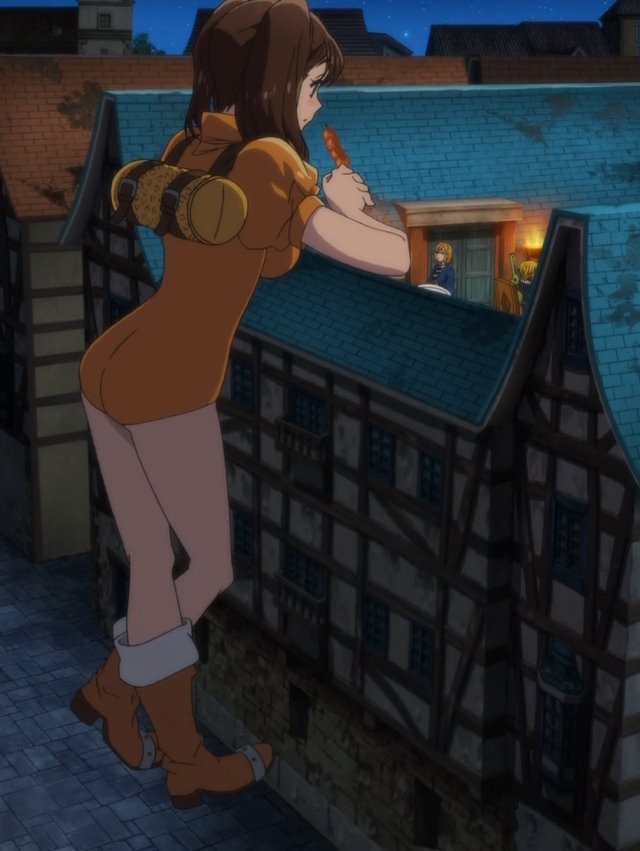 Note the scale of the building which indicates that 35 feet is pretty close to her actual height. Both the people visible in the third story atrium and the visible door indicate that the floor height of this building is about 7-8 feet, not out of line with a pre industrial structure at all.
This means that Elizabeth may indeed be less than 4 feet high, which I think would be remarked upon.
The other possibility...that there might be inconsistencies in scale, can safely be dismissed as it would invalidate the last third of this post.

1 I don't think it's being streamed legally in North America, but it's available on at least one pirate site.

The animated GIF of Elizabeth in Diane's cleavage isn't at their normal heights. The two of them were out in the woods looking for mushrooms and they found a big one which blew spores at them both and made them shrink. So Diane is now (temporarily) the size of Meliodas, and Elizabeth is the size of a doll. And (handwave) there's no guarantee that the mushroom-induced shrinkage affected them both identically.

I think the 35-foot estimate for Diane's height can't be right; I think she's taller than that normally (when not mushroomed).

Also in that GIF, the mushroom's spores didn't make their clothes shrink. So Diane's clothes are in a big pile out in the woods, and Diane is wearing Elizabeth's clothes. Elizabeth isn't wearing anything...

Man, the manga sure is different from the anime! Elizabeth doesn't stab herself in the anime, and Meliodas doesn't require her to prove herself. (She does prove herself, but not because he asks her to.)

4  Note that if one looks closely at the stabby bit, there are two hands. Meliodas inserted his hand at the last minute (with blinding speed....the first indication he was much more than he seemed). In so doing, he took the hit, though this was not immediately clear. The demonstration proves both that she's got sufficient guts and that Meliodas is not actually the sort of sadist who would stand by and watch that..

Usually when they make a manga into an anime they try to stay true to the character art, but they sure didn't in this case. The anime's Meliodas doesn't look anything like the one in your pictures. And Elizabeth is a lot different, too.

Oddly enough, Gilthunder is readily recognizable. (That scene of him bursting through the wall of the tavern didn't happen in the anime, but I know who it is.)

I wonder how the other characters look? Especially manga Diane?

What manga are you looking at, anyway?

I looked at this one, and it's the same as the anime both in storyline and in character art.

It's 107 chapters, so clearly it predates the anime.

7 That might be the pilot for the manga.  I think there was a one-shot, then it restarted with a lighter tone and cutified characters.


Much as I like what we got, I think the darker version could have been more interesting.

8 I didn't know they did that.

9 Supposedly Netflix was going to be streaming the Seven Deadly Sins anime. Did that not actually happen? I don't see any actual announcements, now that I'm looking....