On This Day In Aviation History On May 23rd 1908, John Morrell prepared to conquer the skies in an airship of his own design. At 450 feet long, and filled with about 500,000 cubic feet of illuminating gas, the vessel was actually longer than any of the German Zeppelins that had flown. It was also a much more powerful ship as well, with five engines against the two in the German craft. 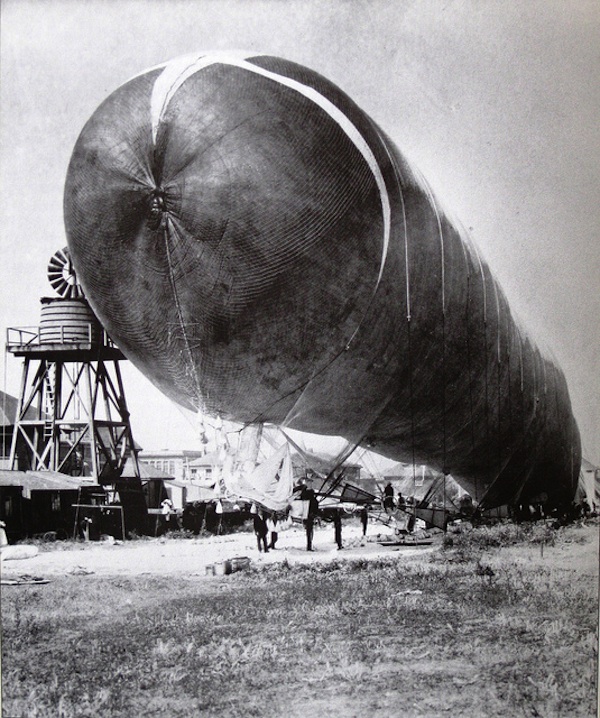 In front of 15,000 citizens of Berkley California, the ship was made ready for flight. The crew of 15 boarded the vessel and manned their stations. 4 photographers were along as well to record the historic event.  With everything secured, the mooring lines were set loose.

Morrell and his crew then sailed into aviation history.
Not only was this the largest airship built up to that time, the 20 people it took aloft were by FAR the largest number of people that had flown in single aircraft. One might note that 15 + 4 does not equal 20, but that is because the ship had another aviation first. An Australian aeronaut, a Captain Penfold, had somehow managed to sneak on board,  conceal himself (somehow) and thus became the first stowaway in the history of powered aviation! 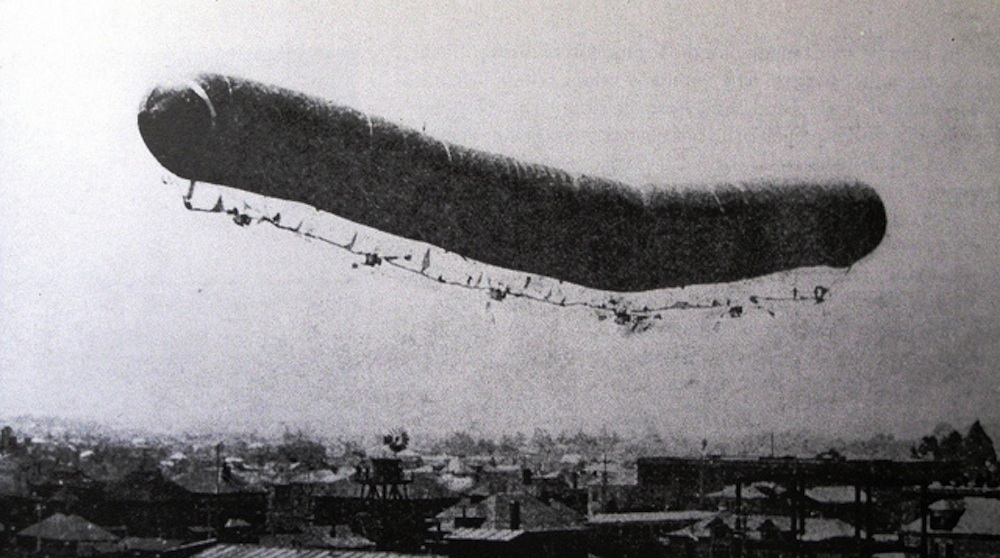 The mighty dirigible began to cruise over the city at an altitude of 300 feet. The airship undulated regally for a while, as Morrell and his crew began to perform maneuvering tests. However,  as if to reinforce the unfortunate imagery,  after an unsatisfyingly short time, there emanated from the bow, an  Earth shattering "POP!". 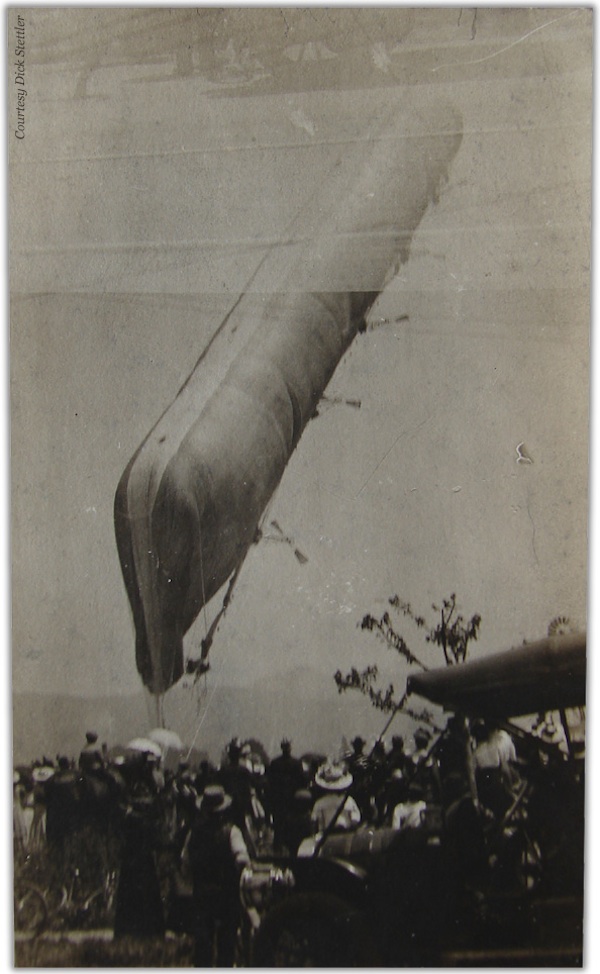 The forward end of the envelope burst open and deflated, beginning a rapid decent, while the stern remained aloft. Those in the bow had a remarkably gentle landing....for a brief moment....

...until the rest of the crew...and the engines fell  on them as the gangway became vertical. The engines equipment and crew coalesced into a modernist sculpture  of metal, blood, expletives and compound fractures. 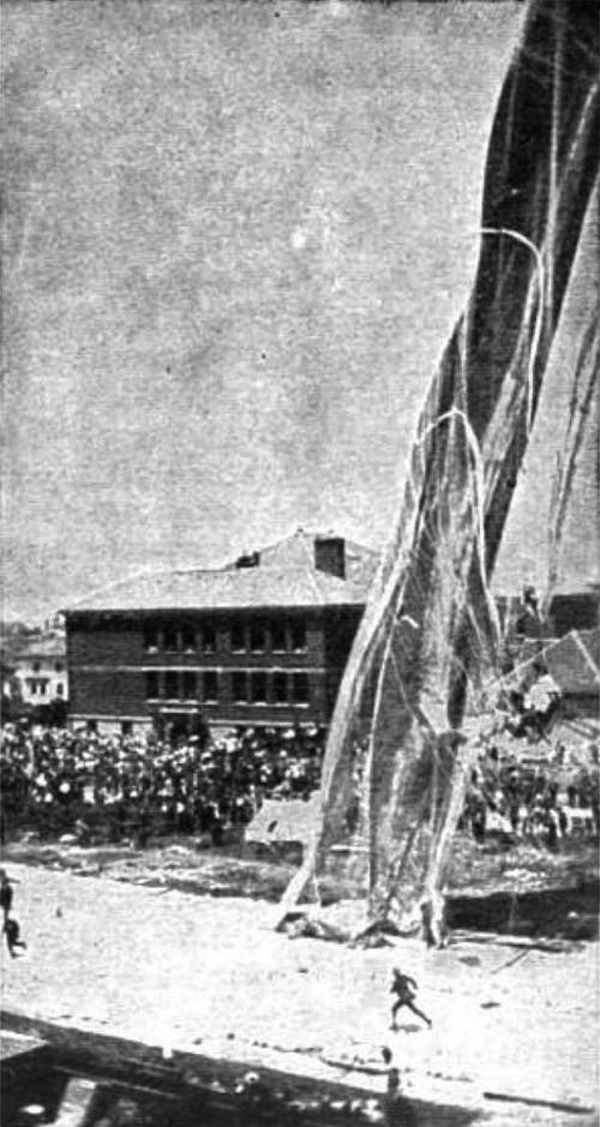 Miraculously, although there were a LOT of broken bones, no one was actually killed. Morrell himself sustained a dislocated hip, broken leg and internal injuries. Capt. Penfold , the stowaway, was drug from the wreck with two broken ankles. 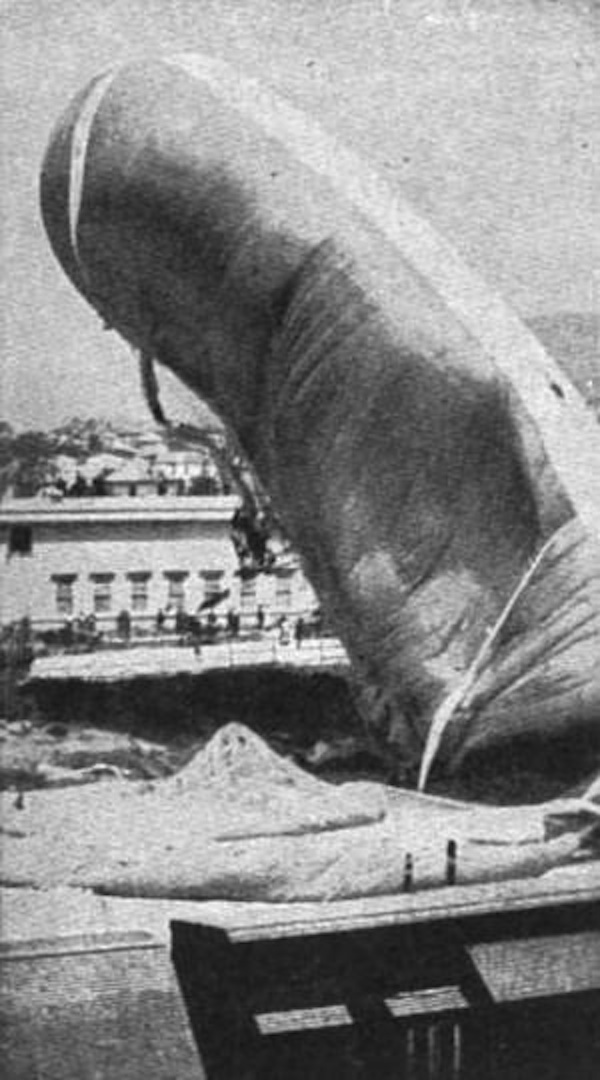 The stern remained inflated and partially aloft for some time as a mute, Freudian testimony to the truly epic level of ignominy that Morrill and his intrepid crew of dildonauts had achieved....on this day in aviation history.

1 Oh you had to make that reference explicit, didn't you, LOL.

It's easy to look back on some of the experimentation that took place between 1890 and 1910, and for us to say, "What were they thinking? Did they really think that would work?"

So the guy who built a plane with something like 7 wings stacked above one another? Well, now we know it doesn't work, because he tried it. That's how you learn things.

So we shouldn't laugh at people like this. Failure is part of the process, and those who are afraid to fail never achieve anything.


I generally agree with that sentiment and in a way this fellow's determination is inspiring. The ship was cobbled together with junk including fishing nets and the actual gas bag was made from varnished canvas rather than silk. I haven't been able to find out a lot about the fellow but he seems to have deeply resented professional advice. At least one Russian and one Australian Balloonist  who were in San Fran for at the time offered him assistance and advice and he refused it, going so far as to ban the Australian from the launch ceremony.... As I mentioned Capt Penfold was undeterred. The Russian, a Colonel Postnikov, felt that in addition to the vehicles manifest deficiencies ,the gas bag had been dangerously overfilled and was under unsafe pressure. His advice to vent before launching was not followed and would seem to indicate that safety vents were not installed.
For a vehicle built using the Little Rascals school of aerospace engineering it was a remarkable accomplishment and might have been.  The ability to elevate and train the airscrews for vectored thrust was an idea decades ahead of it's time. The guts to actually do this is a rare quality indeed and yet.....
and yet....
COME ON STEVEN LOOK AT IT...
I know, I am a bad man.

4 Yah, I know it looks like a flying turd. But it was still an important experiment in the developing technology of flight.