My Hero Academia Continues Season 4 of My Hero Academia started off disappointing, with a first episode that was a  remarkably uninspired recap episode. This was a cunning misdirection that may well have cost them some viewers because the subsequent 10 episodes have pretty much all been excellent.

As of now, this is by far the best season yet. The new villain in this series is quite frightening in his competence and terrifying in his methods and goals in a way that overshadows even the previous seasons antagonists. He and his group aren't mere nihilists, they have a concrete, logical and terrifying plan.

In contrast the protagonists are, well, HEROES, who are idealistic and determined to do good, even though they aren't entirely clear on what that is. This season's story has managed to build up tension quite well and as the heroes investigate and peel back the layers of whats actually going even a few dry Police Procedural episodes add to a growing sense of unease until they figure it out and punch the audience in the gut with their conclusions. All the while character development is happening left and right.

The pace thus far has become break-neck, and, surprisingly enough managed to maintain this despite being most undeniably a shounen show.

That is, there comes a point in any shounen manga where the story digresses into telling it's own fan-fic, and the audience is assailed with backstories, sidestories and angsty drama focusing on fairly minor characters who get into pointless struggles while we the reader/viwer tries to remember what the actual main plot was about. Being faithful to its genre,  My Hero Academia has this particular conceit, but whereas this trope normally stops the plot for a sports arc or something, season 4 is using this to provide something akin to a three ring circus that has provided logical exposition advancing the the plot quite a bit while not harming the very zippy pacing.

In addition, this is how we learn that Togata, who was initially chosen to get All-Might's power, was, in fact the better candidate. Deku is not a bad choice, he is, indeed quite a fine one, but he was not the BEST choice. Togata was. And now Deku is going to have even more to live up to. 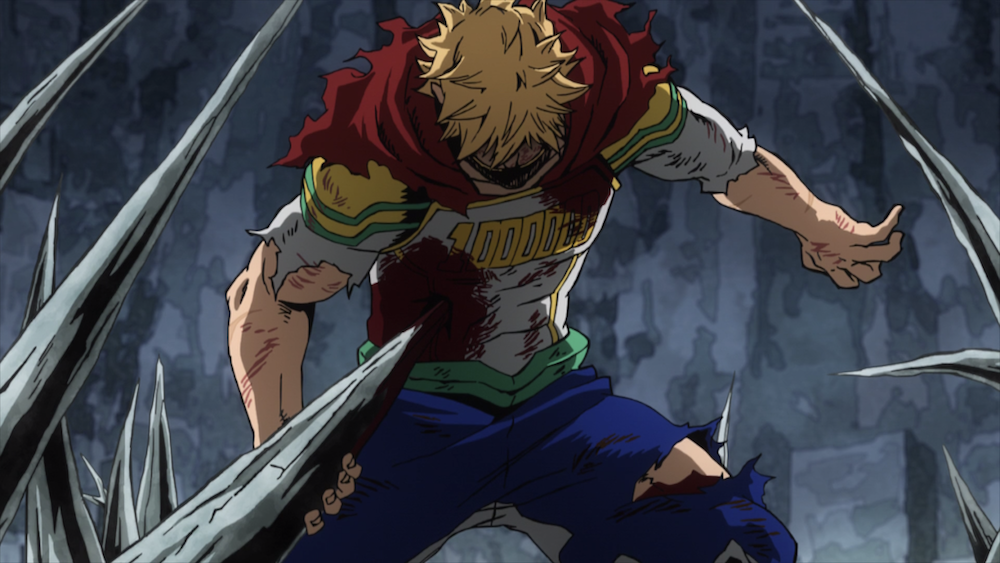 This season has also done quite a bit of world building, explaining how these 'Pro-hero' outfits actually work. It turns out they are like the Police Specials in San Fransisco (before they were  nuked from orbit in recent years), Chartered private firms that work closely with the regular police force but provide hyper-local security, policing, and in this fictional case civic engagement, role models and the use of their peculiar talents. Seeing the whole system of police bureaucracy, trade associations and disparate companies come together as a well oiled machine was kind of neat.

Of course the best laid plans cannot prevent the enemy from having a vote and as I type this the villains have used their franchise most efficiently. This is another area where the show has been better than average. Unlike so many storied today, our heroes are not a handful of competents in a sea of morons. Rather, the good guys (in general)  range from quite capable to 'BATMAN' but the villains are smart, inscrutable and powerful. This whole arc has been really well done in that regard.

The season's not half over yet and it's not at all clear they can keep this up but I for one will be watching to find out.