Methods by Which a "Junior Varsity Squad" Might Reach Critical Mass
This post was initially a long, rambling tangent to an earlier post where it didn't really fit. Now it is a slightly longer rambling post that attempts to build off this article with a creative dateline that that was linked to Saturday by Elizabeth Price Foley. . In my estimation it does warrant some more extensive consideration.
The linked piece talks about the likelihood of ISIS buying a complete atomic bomb. It is a worriesome read to be sure, however, that is not the only way they could mischief with fission.
The notion of a "dirty bomb" which is an explosive that disperses radioactive waste is already well known. Less well appreciated however, is the very real possibility that  a terrorist outfit could actually build an actual fission device that could realistically be in the same class as the weapon that devastated Hiroshima in 1945.
Matthew Bunn, who was involved in nonproliferation issues during the Clinton Administration testified before Congress in 2008. amongst his testimony was this bit of joy...

One study by the now-defunct congressional Office of Technology Assess- ment summarized the threat: "A small group of people, none of whom have ever had access to the classified literature, could possibly design and build a crude nuclear explosive device . . . Only modest machine-shop facilities that could be contracted for without arousing suspicion would be required.

"How is that possible?" one might ask? After all The Manhattan Project, was a vast undertaking that took six years , thousands of people and most of the electrical capacity of the TVA so one might be excused for skepticism..
However, the crux of the endeavor was not manufacturing Little Boy, Little Boy was an afterthought. William Tobey and Pavel Zolotarev suggest (on page 7 of this presentation) that over 90% of the effort of the Manhattan project was getting the fissionable fuels (Oralloy and Plutonium) for the bombs.  The initial bomb  bomb design"Thin Man" was found to be a dud, so effort went into developing the complex implosion system needed to detonate plutonium for what became the Mark 2 bomb design (Gadget, Fat Man, Able and Baker) Mark 1 was redesigned and simplified as Little Boy, a weapon that was so simple that it was not even considered necessary to test it.
In fact to keep from impacting the main (Fat Man) effort,  its construction was contracted out to 3 machine shops! According to Wikipedia, these were The Naval Gun Factory in Washington D.C. , a Naval Ordinance Contractor in Centerline Michigan and The Expert Tool and Die Company in Detroit. These Government and commercial contractors were given plans for only the components they were to build (so none of them knew what they were building). Little Boy was a hedge in case the much more efficient Fat Man design did not work.
Well they both worked, but the big difficulty was not their design or construction, it was getting the plutonium and enriching the uranium.
So...If ISIS can get its hands on 140 odd pounds of Oralloy (highly enriched uranium), and if they somehow had access to a machine shop,... 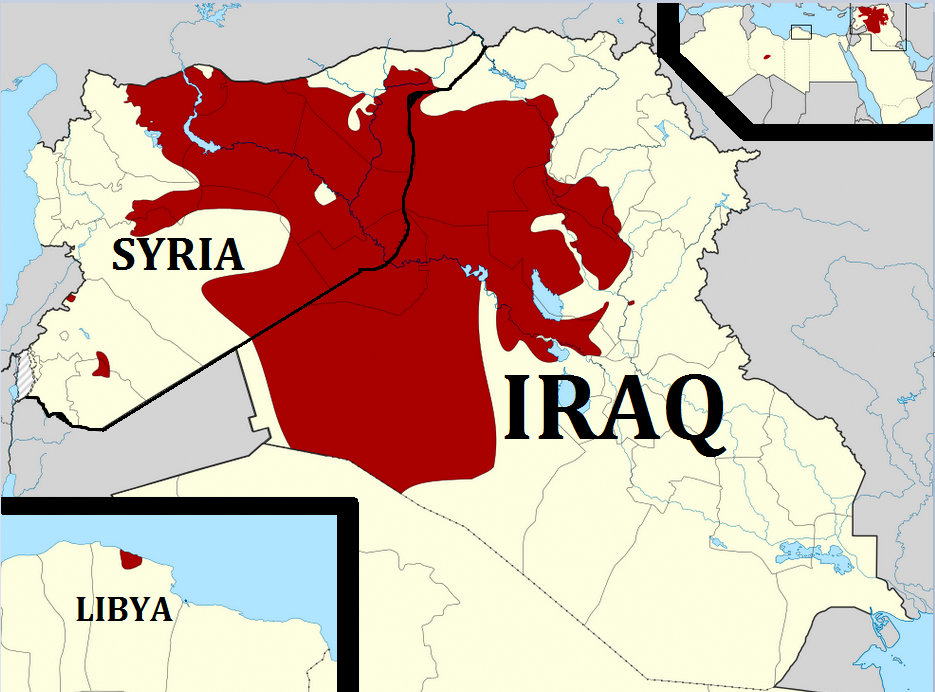 ...then it's entirely possible that they could build something akin to Little Boy. Its significant that the people who built Little Boy were not atomic scientists and did not even know what they were building, only that they were building machine parts to spec.
This is in actuality,  probably more likely than getting ahold of a working nuke. It's disturbingly non-far-fetched in fact, as both the Tobey / Zolotarev presentation linked above and a seperate presentation by the aforementioned Mathew Bunn have overviews of relevant incidents involving weaponizeable fissionables. 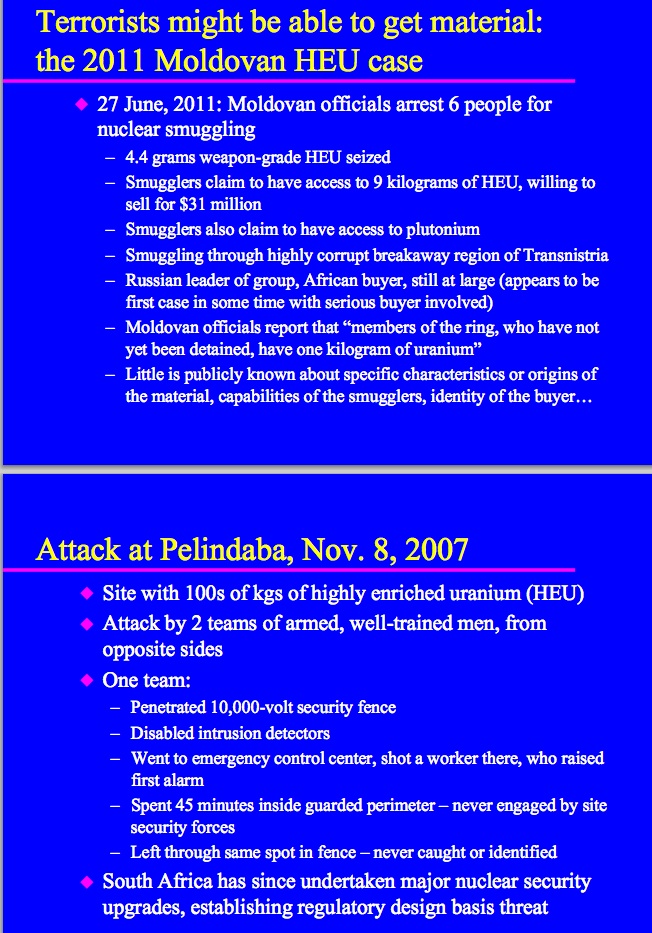 Bunn 2011
This CRS Report for Congress comes to similar conclusions and makes for sobering reading. The scenario involving a crude nuke in a supertanker taking on oil in the Houston Shipping Channel is particularly worrisome, given that so many of out geopolitical opponents would really like to get oil prices up.
It should be noted that oralloy is not terribly common and the crude, Little Boy type weapons we are discussing here are quite wasteful (needing 140 pounds of oralloy for a critical mass) so any conceivable heist is unlikely to enable for than a few bombs. On the other hand,  global stockpiles of the stuff are measured in tons.
How much damage could a small, crude nuke do?
Well, Little Boy was the crudest of crude bombs ever made. It probably serves as a template for what a non-state group could realistically do given that it was right at the minimum amount of Oralloy for a Uranium weapon without really advanced gadgetry. Bombs made by state actors such as Iran or stolen from Pakistan are likely to be significantly more powerful unless they are advanced weapons designed to be small.
Little Boy therefore should probably be taken as good ballpark estimate of the yield a crude terrorist weapon might have.
There are uncertainties about how powerful  Little Boy was, with estimates ranging between 13 and 16 kilotons with most references saying around 15 kt, therefore, it seems appropriate to again post a video of the 15 KT Upshot Knothole-Grable test.
(An extensive overview of the damage assessment can be seen here)
A good overview of what would be done to something other than a desert can be found in this report by FEMA and Lawrence Livermore which details the effects of a 10 kiloton improvised nuclear device on Washington DC.
Reactor grade plutonium is much more accessible, but is harder to handle and requires challenging processing. Additionally, if plutonium is used in a gun type weapon (which is what "Thin Man" was) it will fizzle and blow apart before a full detonation, however the Tobey and Zolotarev presentation mentioned previously seems to indicate that a fizzle could approach a kiloton.
Even if significantly less than a kiloton such a weapon could cause considerable havoc. A Texas City sized explosion with the added effect of radiation pulse, fallout and dispersing toxic plutonium would be devastating. Even a near total fizzle, an Oklahoma City sized blast with the added contamination and associated terror of "OMG!! ATOMIC!1!" would cause panic beyond that seen on 9-11-01.
More sophisticated implosion devices are extremely challenging, but their use should not be completely dismissed. Such weapons, after all, require the sort of advanced, cutting edge technologies as were available in the late 1930's to mid 1940's. They would allow 4-10 times as many bombs to be made for any given amount of fissionable material, as well as much larger yields. Still, the technical skill, physics knowledge and manufacturing ability required are at once so diverse and specialized that they are vanishingly unlikely to be used by non-state actors. They additionally might, due to their sophistication, require a test, that, upon occurring in ISIS or Boko Haram territory, would most likely inspire a sudden intensity, clarity and unity in response from the western nations heretofore unseen.  So the picture isn't completely grim.
But it is certainly cause for vigilance.