Bob Woodward of course is one of the reporters who took down Nixon. This is major 20th century history, and history it seems is at least as poorly understood by our polity as civics.

Of course one might ask why Bob Woodward came up in casual conversation and then one would find oneself in the middle of something even more disturbing. 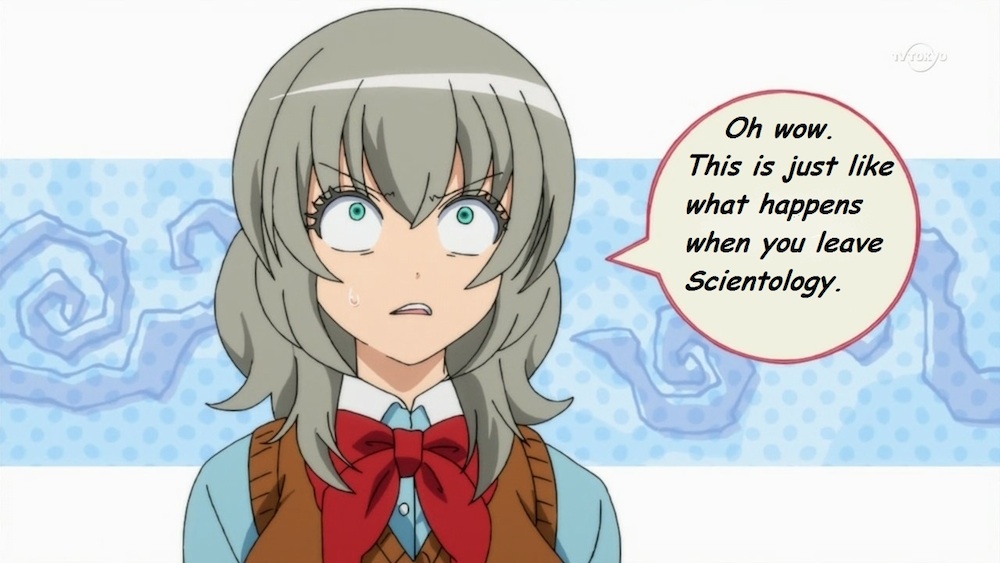 Worse it involves  #politics.....so we'll continue this below the fold.


As I understand it, Bob Woodward mentioned that the President was not entirely truthful when he said that the Republicans proposed the sequester.

For those of you not following politics, in current parlance "the sequester" refers to automatic spending cuts that kick in tomorrow if an agreement between the president and congress to make progress on laying the groundwork for passing a budget (which hasn't been passed in 4 years) is not passed.  Yes for avoiding the sequester the low bar is low...and yet here we are with no agreement in sight.

We discussed in passing here.

OK, the president has said that the Republicans proposed this and would not budge on it. Bob Woodward (Slayer of Nixon), who is NOT particularly hostile to Obama philosophically, mentioned in an interview that this was about 180 degrees from the truth. According to Woodward, (who has been given access to the White House for some time to write a history of the administration and was present at the time)  the POTUS had brought it to the table and pushed for its adoption.

At that point there erupted a smouldering anti-Woodward smack talk on the far-left side of the media.


a few days later Woodward,  had some other things to say that could be considered....I dunno...unflattering perhaps?

"Thatâ€™s a kind of madness that I haven't seen in a long time,"

At this point in the process the White House reacted...by threatening Woodward.  As you can see, Woodward, being a reporter...reported the threat (It's what reporters are 'sposed to do.).

The result of this was that when I came home and checked my Twitter feed yesterday it was full of retweet from lefties who had gone bat-scat-bonkers and were giving Bob Woodward, the 'Body-Snatcher-Point-and-Screech'

These are two screen-caps of selections from my twitter-feed where the anti-Woodward posts were all back to back. 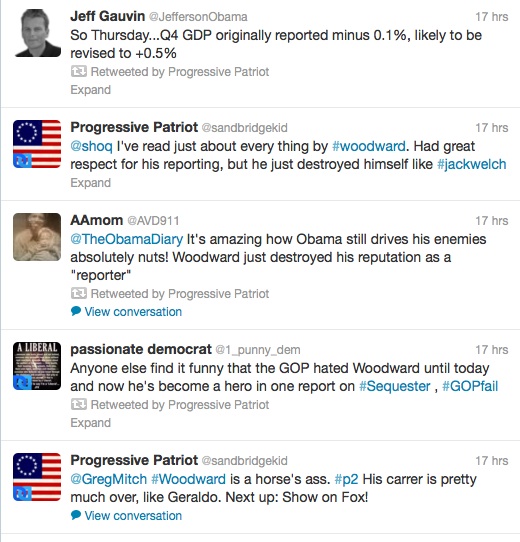 Not pictured all the 140 character slashfic poems from fangirl acquaintances.

This I soon found out was was part a firestorm of Woodward bashing. This has extended to the media. Woodward is one of the great lefty heroes and yet when he REPORTED what he saw and the threats he got thrown under the bus...labeled double-plus-ungood...struggled against...and infected with cooties.....

I'm not actually surprised....I encounter this sort of thing in college all the time, and there is a long history of members of the party being turned on because they don't tow the line...but damn! To see it so brazenly is unnerving.

Professor Jacobson has thoughts and Instapundit has round-ups here and here. Yes, it appears that other reporters are coming forward about having been threatened.

There are three stories here.
1: The POTUS is not an eagle scout. (not news)
2: The White House is threatening reporters (not surprising given his history but definitely news...like often happens the coverup is much worse than the crime).
3: The US  left is run like a cult: that is even an old school hero of the left cannot stray far from the current talking points without risking   ostracization (anyone whose followed history is unsurprised by this but it is rare to see it so blatant and in the open outside a college campus. )

I'm not sure is the brazenness of this firestorm of denunciation is symptomatic of supreme confidence that they've won or profound fear and insecurity. I suspect the former.


Full disclosure: I can't take credit for the observation the appalled young lady is making above. The (obvious) Scientology quote I think originated with Moe Lane via Twitter.

It is particularly striking to me how much the left has turned on Woodward.  He didn't change.  He was telling the truth before, and he told the truth now.  They only like the truth when it works in their favor.  Otherwise, it can get stuffed.