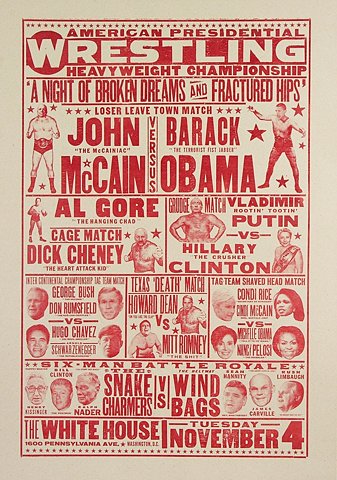 It's so political that the health department made us put it below the fold for the safety of those with weak constitutions!

Image via
I've been judiciously avoiding the mess this week, but one of the odder stories has been the dis-invitation of Governor Palin to a demonstration against the Mullaocracy in Iran.

A consortium of Jewish groups were organizing the protest and had confirmed Hillary! Clinton as a guest. In hopes of making the the event rather more bipartisan they sent an invitation to Governor Palin who accepted. This did not sit well with Hillary! who announced that if Palin was in attendance she was not going to darken their door as Hillary! felt that the invitation of a non-democrat made it a partisan event...
(That word...I don't think it means what she thinks it does).

Anywayyyyy....the result was that Goverrnor Palin was dis-invited. Now it has come out that the disinvitation was because Democratic lawmakers threatened the Jewish groups with loss of their tax exempt status. (HT Rand Simberg). Meryl Yourish has...ummm.....thoughts.
Keep in mind this is all hostility aimed at  Palin...who you will remember is not at the top of the ticket..... the Obama people who are, in theory McCains opponents, are such poor strategists and so blinded by their rage that they keep going after the...decoy.

This does not speak well to their ability to deal with any real world situation involving an enemy of greater sophistication than a 10th grade Civilization player.

As an aside, Machine Overlords has a dispute with Joe Biden...
(who'd have thunk it!?)

And now for something completely different....

At the risk of muddling the political waters with actual issues. The past weeks Wall Street debacles were foreseen by both Bush (in 2003) and McCain (in 2005) who both tried to head it off  but were stymied. Bush, this week  did what he has done whenever a crisis hits, he acted.
Like some of his other solutions it is not one not without very troubling implications....but like most of his previous responses to national crises, probably the least bad of the terrible set of options open to him. This has been the story of the this presidents 8 years.
Whatever armchair quarterbacking one does on this, it is pretty clear that his option was better than voting "present " and far  far better than the alternative that Congressional leaders chose, which was to adjourn, throw their hands up helplessly and head for the hills.

Bush is not sugar coating this, (via) In fact he's dealing with this particular crisis reasonably well. The enormity of the economic crisis we now face is as underapreciated as the paucity of our options.

I have said numerous times on this blog that I have issues with some of the presidents policies...I agree with him on 60% of issues or less, and (being human) he has certainly made some mistakes. However, he has acted when others faltered and has kept his head when the crap has been hitting the fan. While his solutions have not led to sunshine and lollipops, I think that the notion that they were even in the cards is unrealistic. Indeed the sheer grimness of the hands he has been dealt are underestimated or ignored by everyone.
He has been POTUS during a very grim time and has had to deal with a hell of a lot of crap. Despite his portrayal as a rigid ideologue he has tried to work with congress and compromised ...sometimes rather a lot (see DHS...which he opposed). He has been better, than his predescessor on energy, and has reacted well to an economy that has recieved at least 4 body blows. There have been misteps to be sure but generally he and his people have learned from those, which is better than many can claim. People look at me like I've grown a third eye when I say this, but I firmly believe Bush deserves better than the frothing contempt in which he is generally held today.

1 George W has his failings, no doubt, although many of his so-called failings are little more than legacy media fabrications.  I suspect he entered the White House anticipating two terms with a nice quiet domestic agenda.  Instead, he was barely in the office when we were attacked.  I think he has done well given the circumstances.  While it's comparatively easy to dwell on George W's failures, the real question to ask is would the other candidates have done better?  I don't think so.