It's Astounding ...that a show with as much of an over the top fanboy affirmation premise as Outbreak Company could be the least bit interesting.

It seems that a hyperspace portal to the Holy Eldant Empire (a middle earth style fantasy kingdom) was recently discovered within a crevasse deep inside the Aokigahara forest. The Japanese government has decided that instead of water filtration, tractors or composting toilets, Japan's killer app in trading with this wealthy but feudal nation will be Otaku culture and its trappings. They decide to secure permission from the empress to proselytize and proceed get a real flaming Otaku to act as an evangelist for the..."faith".

Our protagonist is Shinich, the recovering Hikikomori and flaming Otaku who answers their want ad. He ends up as Japan's ambassador to a fantasy kingdom, where (woe upon woes) he is gifted a gorgeous maid and must frequently entertain the 16 year old empress.

Yeah...confidence is not high, but as a couple of people have said it has potential I decided to give it a try.

The fact that this actually happens in the show would normally be a warning sign... 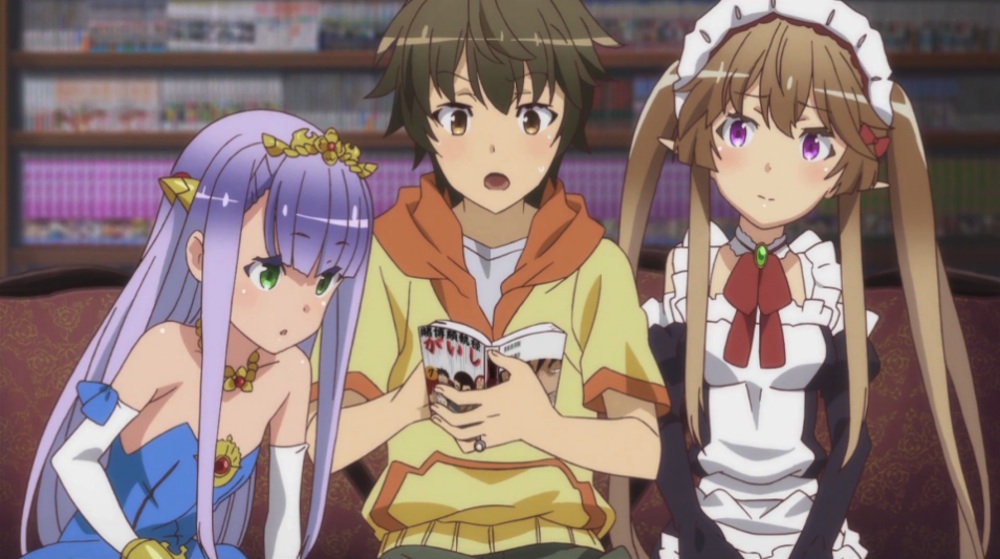 ...by the time the  Empress of The Holy Eldant Empire and the cute  maid were eagerly having our hero read manga to them, the show had already gotten my interest.

Myucel the maid is a pretty awesome character in her own right. She's a half-elf and interracial marriages are taboo (I'm guessing that having her assigned to Shinichi was meant as a subtle affront.  When her ear is exposed inadvertently she reacts with absolute dread).
He's presented with a stick for beating his servants....by one of his servants. This is handled pretty well by the writers, particularly the complete bewilderment by the servants at his saint like congeniality basic decency.

The 16 year old empress is precocious, pompous, spoiled and a rather major complication as she has taken an interest in the 'missionary from afar'. She also has REALLY bad breath.

However, our hero's headaches are only beginning...

The characters are able to use magical rings to communicate, but being explained as operating telepathically, the rings cannot translate text or video signals...and the population has a 20% literacy rate in their own tongue so he has some real hurdles to overcome in his mission.

The show is well stocked with silliness, but it has a rather serious side too. Two episodes in its a pleasant and quite interesting lark.

Then episode three happens...in which all sorts of little offhand things come together as this show takes a slightly different tack. It may in fact be awesome.

Confidence is still not high...I expect this show to devolve into a moe-ocalyptic mess, but right now it is both intriguing and even touching. Despite the fact that the set-up is pretty much the definition of Otaku wish fulfillment, this is a quite interesting show. It's thoughtful, internally logical and even touching...I await with bated breath episode 4.