I.T. People: I Have Some Questions About the Iowa Carcasses ...er...Caucuses.

They've completely botched the Iowa Caucuses.
Several of my legions of...six or seven readers work in IT and have had experience with applicable app issues.

So.
Here are the facts as I understand them.
The Democrats decided to simplify the chaos that is this caucus thing by using a smartphone app.

A Phone application: you know, one of those esoteric bits of technology that is basically unknown to the general populace that is never used for secure online sales and such in everyday...oh wait.

To that end, the Democrats hired a company called SHADOW to manage the app that counted the votes.

There was a technical problem and as I post this nobody knows who won or lost, aside from the three or four candidates who have claimed victory in the absence of any numbers.

How does this happen?

What incompetence was necessary for this to happen?

I just...
Gurus of technical support just, explain this...
Please.

Note that even assuming nefarious intent with the goal of botching the caucuses does not absolve the participants of failure due to an unprofessional lack of subtlety.

Again; they named the company that ran the AP that lost the votes...SHADOW which is a company partially owned by a firm named A.C.R.O.N.Y.M.which in turn is run by former Clinton staffers and funded by a big Pete Buttigieg backer supporter.

A.C.R.O.N.Y.M. is literally an Umbrella Corporation that owns several companies that...seem to...exist...but have indeterminate specialties other than to be oriented towards left wing politics and...

Why would you name your company that makes voting software and has to have trust and transparency as its highest priorities...SHADOW (in all caps)? 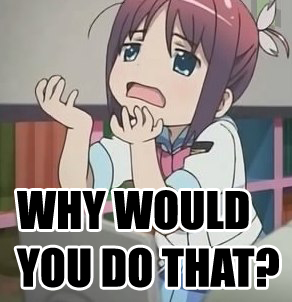 I just have this notion of A.C.R.O.N.Y.M. helping organizations put their mission statements in their name, with results like
Special Executive for Counter-intelligence, Terrorism, Revenge and Extortion,
or perhaps League Of Calamitous Intent
or Vicious Evil Network Of Mayhem.

But this notion; it is crazy.
CRAAhayhayaZZyyyY! I sai

W hat is going oN?

1 Consider the scope of the problem being solved here: "1600 people need to report a dozen names and numbers, once every four years, from locations around the state". The existing phone-based solution was tedious and human-resource-intensive but pretty reliable and accurate; the list of names is small, reducing the chance of transcription errors, and the numbers are pretty small as well.

There is nothing about this problem that calls out for a custom multi-platform smartphone app as a solution. A secure web form would be far easier to create, test, maintain, and audit, and would work on any modern smartphone or tablet. In either case, you have to distribute login credentials to the right set of people well in advance and have them all verify that it works before C-day; that doesn't seem to have happened here.

2 To my surprise, Vice has some actual reporting on the app. The part where they sent email at 1 PM yesterday with the subject "IMPORTANT: Final App Instructions" pretty much says it all.

4 A secure web form to enter the results and have the precinct official sign, scan, and upload the tally paperwork for verification (maybe issue document scanners to every precinct...or just have them take pictures and upload).  Spot check, by hand, some number of submissions as they are finalized.  If error rate in the spot check is too high, pull a larger sample and then maybe start calling the mismatched precincts to verify?

5 I'm just grateful for all the learn-to-code jokes the Dems have enabled with this. Why, if they'd hired a bunch of laid-off coal miners, they could have saved money and gotten a better product!

6 Someone on 4chan is claiming the app is fine and is just being used as a scapegoat.  Take that with whatever level of skepticism you feel appropriate.
They've still only reported about 70% of the tally so far.  How could this possibly be taking so long, unless the original (presumably on paper) counts were destroyed?
Something kinda funny:  Pete Buttigieg (I probably spelled that wrong) was talking about abolishing the electoral college, but he seems to be running behind Bernie right now in votes, but ahead in delegate-equivalents.  I wish someone would point that out to him, although he probably knows.

7 When I did independent systems and networks contracting, one of my clients was a small insurance company. This was back when companies were first starting to move their software and data services to what is called "the cloud" now; was called "on the internet" or "WAN server side software" then. She kept having me build more and more powerful computers for her office, because she could not grasp that her policy software was running through a 64kb pipe and being provided to every affiliated agency in the country from probably one Xeon server stuck in a closet somewhere, which was likely connected to, at best, a 1mb pipe.

I could have built her a more powerful computer than the server she was trying to contact and it would NEVER GET FASTER than 64kb.

I see parallels to what happened in Iowa.

Bureaucrat: "Our vote counting needs to be better, more reliable, easier for people to use."

Techie: "It's only as good as a person's ability to read, write, and talk. There is no technology that's going to improve on any of the existing solutions."

Bureaucrat: "Apps! Those are things everyone wants! We need an app for that! Ha! Isn't that clever?!? Need better voting? THERE'S AN APP FOR THAT!!!"

Bureaucrat: "Make it so."

8 That seems to be one example where the "series of tubes" is an apt metaphor as it conveys the notion that a network only has the magic smoke capacity of its slowest component.