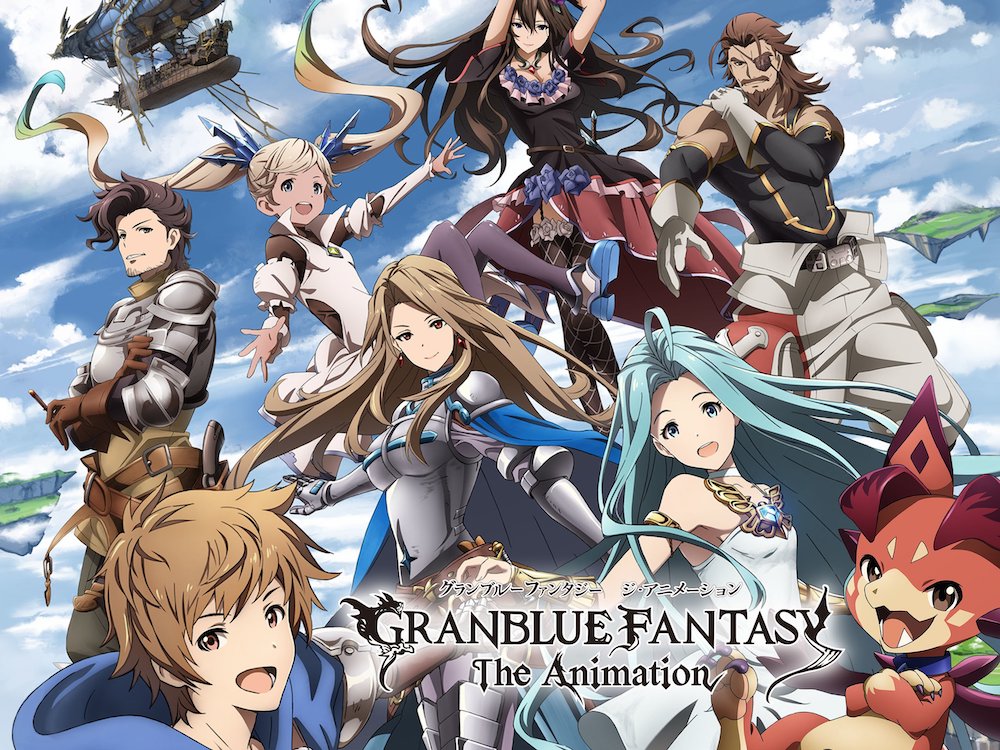 Granblue Fantasy  aired in 2017 and I did not really pursue it at the time.
Well, I  noted that the show features many elements that can be considered to be warning signs in media, much like brightly colored coral  is underwater....such as...

*It's based on a video game.
*Nay, a GACHA game actually.
*It's set in a sort of steampunk Middle Earth.
*The initial set up appears to be a series of bromides, bound together with cliche's served on a bed of tropes.
*This thing exists, and talks... 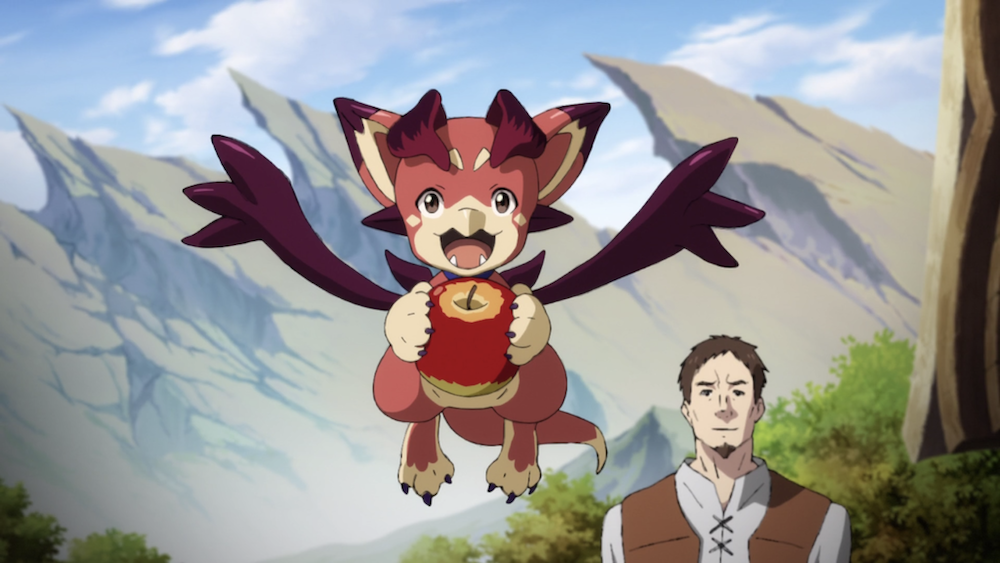 Vyrn is completely off model with the rest of the show. Even the other cute animals don't look like this.

...and that's where I initially stopped watching, because with all the other warning signs this just did not seem promising.

However, there is a sequel series out now, and, given the slim pickings of this season I decided, to check it out and to that end, I decided to give the old series another shot. 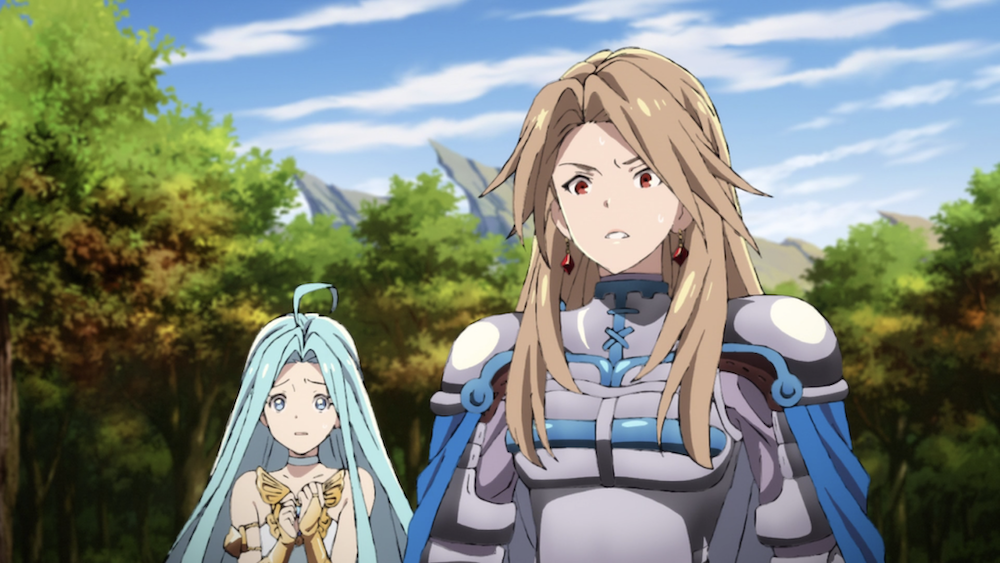 Meet Lieutenant Katalina Alize. Until a few hours ago a highly skilled and decorated soldier of  of the Erste Empire who was (until a few hours ago) in charge of security for an undisclosed research project. This involved undisclosed badness being perpetrated on Penny Plot Device Lyria (the young girl in the background). We join our statuesque heroine in the process of rescuing Lyria from her own troops, on a flying battleship. In the process of this unorthodox personnel transfer, Lt. Alize demonstrates that she's not a diversity hire, but rather an example of authority being derived from asskicking ability. Katalina is an accomplished spellblade who makes short work of her former shipmates until a particularly smarmy example of effete' aristocracy unleashes a magical weapon upon the young lady she's trying to rescue, precipitating an explosion, that results in Lyria falling from the ship, into the forest of a floating sky island near... 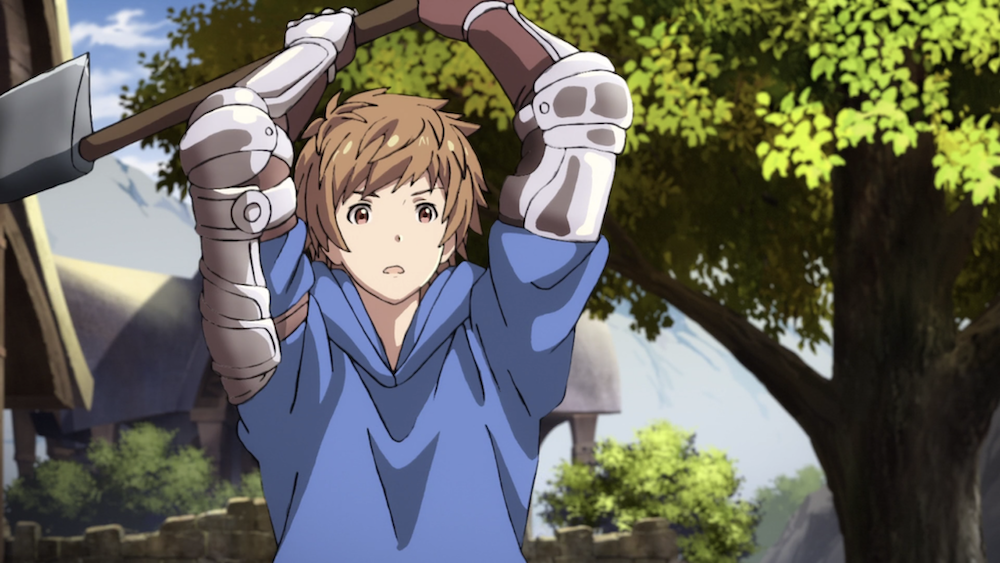 Gran, who, as we are introduced to him, is chopping wood in full plate armor, not because they have only one Gran model, but because he's a little fanatical about his swordsmanship training. Upon seeing the Battleship fly overhead, suffer an explosion, and drop what they took to be flaming debris in the forest, Gran and the off-model pokemon noted above rush to the scene of impact to see what happened (and if necessary work to control any forest fires). They find Lyria, unconscious outside the long sealed shrine to the island's god (called Bahamut). They note that the long abandoned and off limits shrine is...glowing. Lyria awakens, and after virtually no exposition is found by Katalina, as well as imperial troops. After a brief fight Gran, realizing that the two ladies are actually fugitives, takes a moment to ponder who the bad guys are in this situation, a question that is helpfully addressed by the Imperial troops as they interact with the locals...

The issue thus resolved, he lends his pitifully non-magical swordsmanship to the two young ladies, and, while nowhere near as skilled as Lt. Katalina, he proves to be quite impressive in his own right, punching well above his weight.


Well, until the forces of villainy unleash a 5 headed dragon that proceeds to disembowel him. 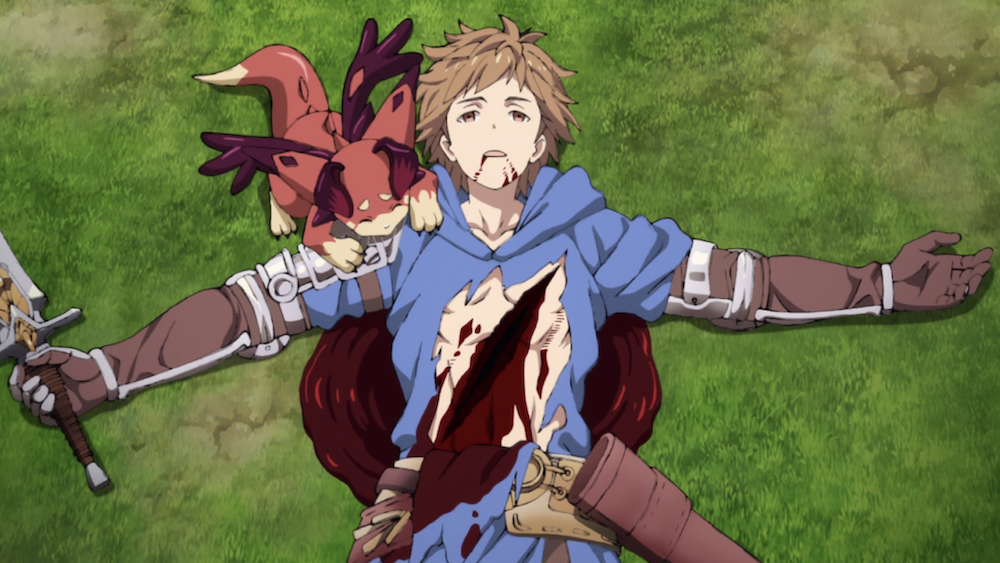 Then he's dead. The end.

Until, Lyria, in a fit of anguish resurrects him, calls forth the god of the island to smite the enemy and in the process he ends up with some of the power  the power of Bahamut, the island's god, fused with him.
"Yay! superpowers!"

Except for one minor detail...scarcely worth mentioning

Lyria is indirectly powerful, She has something to do with a Imperial project to enslave dragons and even the gods of the world (these are thought to be similar to Japanese Kami, but in fact were created as weapons by a much older pantheon) However, Resurrection is not actually allowed by the laws of magic. Lyria has merely animated Gran's corpse with half of her power. If the two of them are separated by an arbitrary but as yet undetermined distance, Gran, and the little girl, will die.


Upon recieving a  bit of exposition after the Imperials withdraw, Gran decides it's a really good idea to accompany these two young ladies on their quest, which currently is to get as far from this island as possible, and ultimately is to...

They are going to work on that while flying away in their airship. 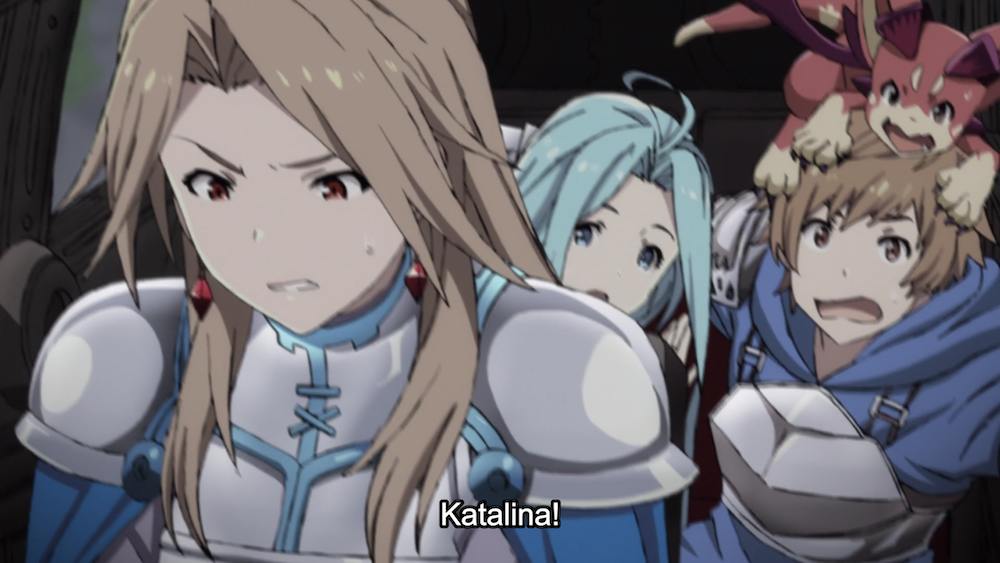 ...they must find a work around for the fact that Katalina's skill-sets include, swordfighting, healing magic, small unit tactics, logistics, bartering, diplomacy, linguistics and thinking on her feet... 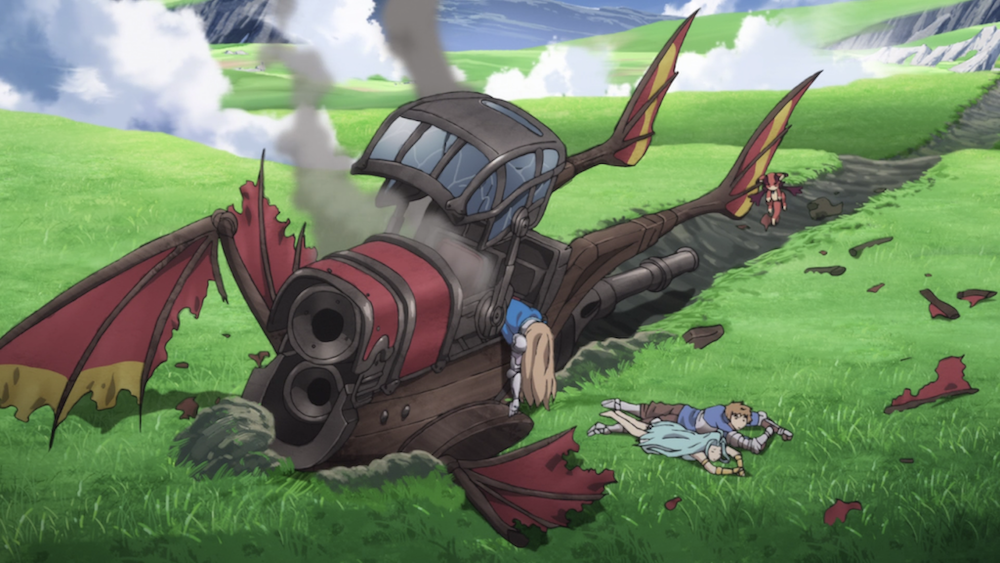 ...but not piloting airships (there were always enlisted guys for that before she deserted)

To my astonishment, GranBlue Fantasy  is a hoot!
For all it's many many cliche's this series actually manages to work and not be boring. The pacing is solid throughout and most of the characters are nicely fleshed out. This is a remarkably ensemble cast, with everyone bringing something to the table and as the party grows over the series, they all complement each other well and compensate for each other's weaknesses. 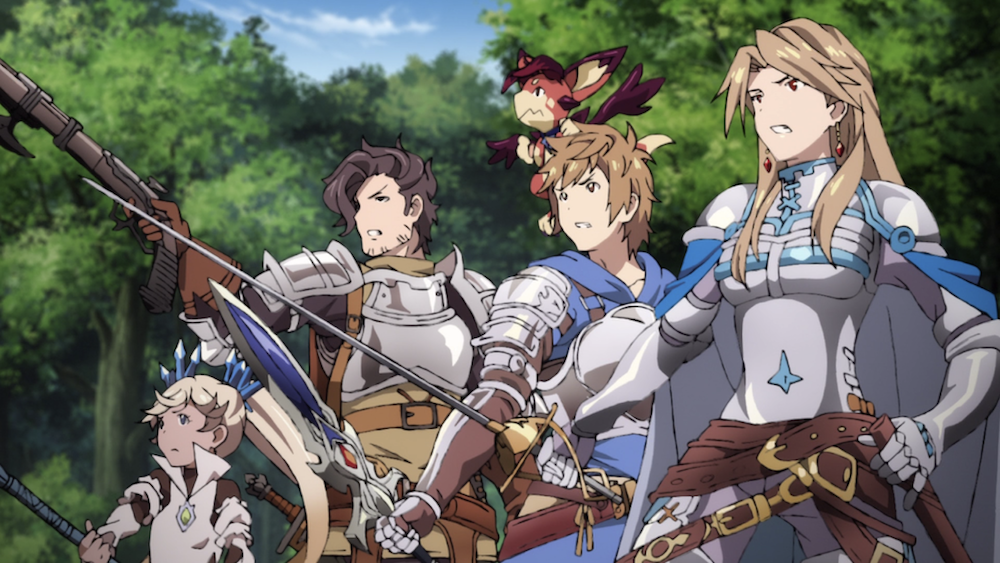 There are consistent and nice character touches too,

Regarding visual quality, there a few off-model scenes and the 12th episode seems to have been rushed, with some of the VFX not up to the series' usual high standards. The art direction is gorgeous, and the animation appears to mostly be cell animation. As often happens, the CGI doesn't quite mesh and this would normally be jarring. However, the computer animation is used mainly for unearthly/ supernatural things where the "off" look actually works very well.

I watched it in two sittings and found it quite enjoyable. the climactic episode (12) is a little odd, and as mentioned earlier seems a bit rushed. Perhaps it was intended to be two episodes. However, it definitely sets the stage for another season, and while it does advance the plot, it really seems more like a mid-season climax than any sort of denouement. This would probably have infuriated me in 2017, but as GBF2 is currently airing it means I have something to look forward to.

There is an episode 13, but it is essentially a Netflix adaptation.

All, in all, I was quite surprised how enjoyable and engaging this show is. It is basic fantasy with a side of steampunk, but it is quite nicely executed and has me hooked for more. 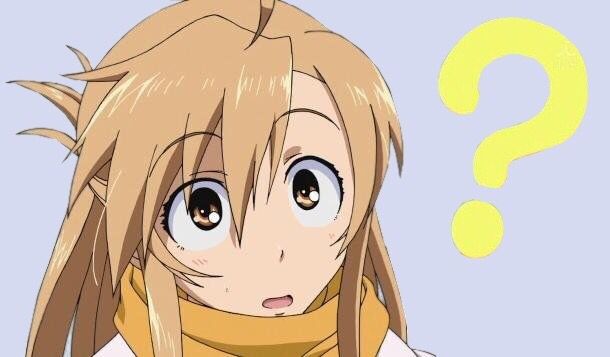 4 GBF probably shouldn't be as good as it is. When I first saw it, I bounced off the first ep of the anime... "This is kinda generic-looking, meh." Got back into it when I found a bunch of my old buddies playing the game. That was what, 3 years ago? Lots of fun since.
The end of season 2 is... maybe a bit less than halfway through the First Big Arc of the story? (So far there have been two of those, with the third one pretty solidly underway at this point.) But it's the side events that are really charming, since they really throw anything and everything in there. Moody character pieces? Bollywood homage? Cooking showdowns? There's a series of events that's literally three bro-types sitting at a cafe and shooting the breeze about how they wish they were awesome, living rich fantasy lives while everyone else is off fighting dragon gods or something.
(Ancient dragons have notoriously poor chopsticks skills. Bring a spork!)

5 This is streaming on AnimeLab here in Australia.  I haven't tried that since I got fiber internet and wow is it better.  Doesn't hurt that they seem to be running out of Amazon's datacenter right here in Sydney.


They also have Interspecies Reviewers.