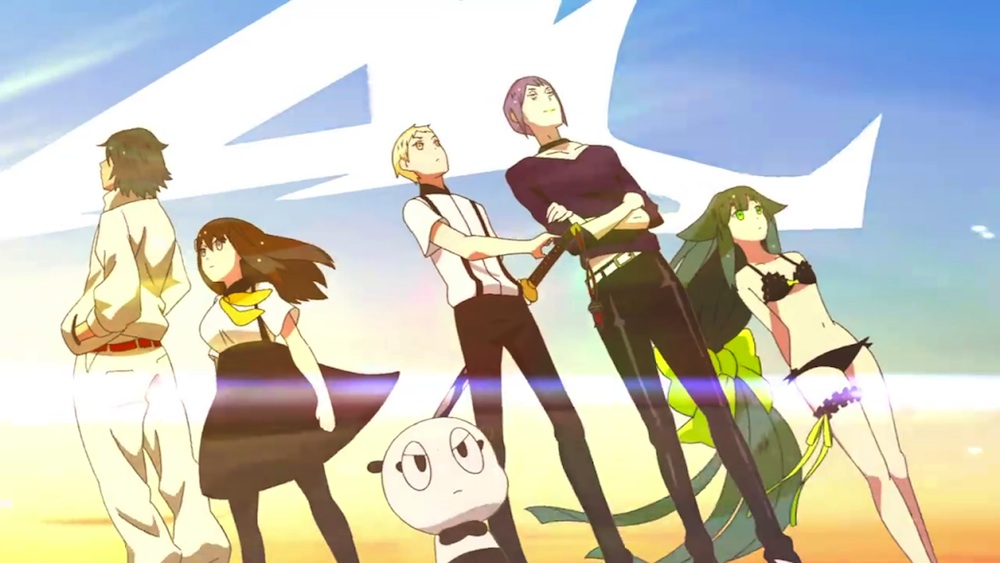 There is no Panda in this picture.

Science Ninja Team Gatchaman was one of the most important and influential shows in the history of anime. It looks dated today but in 1972 it had the best art and animation that had appeared on weekly Japanese TV and it was not equaled for almost a decade in that regard (Mazinger Z aired at the same time). The show was a remarkable break from the norm. Tatsuo Yoshida cherry picked elements not just from Japanese Sci-Fi films, but also Marvel Comics, Johnny Quest, '60s spy movies and the chaotic and terrifying headlines of the day. I've heard the show described as cliched..but Gatchaman MADE those cliches. The idea of the sentai team largely originated with Gatchaman,: June the exceptional strong heroine is in the finest Xia brothers tradition, Joe, the somewhat mysterious and dark second in command, occasionally complex villains, crazy malevolent transvestites....OK that last one didn't really take off but a HUGE number of anime tropes originated with Gatchaman.

I mention all this to put into perspective the epic nerd rage that seems to have gripped a number of my fellow old farts at Gatchaman Crowds, a show that is by today's standards poorly drawn, poorly animated and seems at first blush to have nigh-on nothing to do with with it's epic and beloved namesake other than the name and trademarked logo. So if you encounter one of these people just understand that this was not at all what they had hoped for and they are feeling quite depressed and alienated by "these kids today". Thus the best thing to do is quietly get off their lawn and give them a bit of space while they write their angry screeds in their APAs.

While they do so I recommend that you go to Crunchyroll and catch up on Gatchaman Crowds which is not particularly well animated and has a strange art style but makes excellent use of color and is exceedingly interesting.

This show is whacked.

Meet Hajime Ichinose.   Some people march to their own drummer. She disassembled the drum to make a lampshade, a dream catcher and a flower pot because she's quite happy to skip instead.

How this girl got through Japanese school being such an elevated nail without being bullied to suicide is explained by the fact that she is possessed of a tragic affliction... preternatural perkiness. She is completely offbeat in her outlook and hobbies, one of which is collecting notebooks. When a strange 7 foot tall grey skinned man with 30mm fangs appears before her and offers her a notebook after ripping it from her very being...she gleefully adds it to her collection without reservation or concern.

She soon learns that she has been inducted into Gatchaman, a team of 3  aliens and 3 earthlings assembled by the aforementioned grey guy who all have unique abilities and are charged with defending Earth against malevolent Rubick's Cubes.

...and then the show gets strange.

I'm not entirely sure what this show is about, as it keeps changing its mind, but as it wanders down the circuitous path that is its plot I find myself enjoying the journey.

This show is clever in a lot of ways, not the least how gently and quietly it puts to rest the misconception that it has nothing to do with the old show. (It was about the third time I heard a particular word that I realized..."Hey!" ) Most of the homages and re-imaginings will be lost on today's generation, but it's obvious that the writers are all fans of the old show.

Gatchaman Crowds is quite odd and a lot of people will just break morale over the fact that Hajime is a Genki Girl cranked up to 11. I find her to be a delightful loon but your mileage may vary. The very straight laced nominal leaders of the team  (one of whom is NOT a Panda) are horrified by her nonlinear habits. The rest of the team is pretty laid back about her though.  Interestingly, Hajime may come off as a whackadooldle but she displays a certain uncommon sense that is sorely lacking from a lot of shows....and a lot of people.

Despite being a show about a desperate struggle against a bloodthirsty peril from beyond the stars, this show has managed to become remarkably upbeat and enjoyable and that's just part of this shows peculiar charm.

UPDATE: Don, who is liking the show too, makes a good point about the notebooks I had not caught, but which seems obvious in retrospect. He also has a lot of screen-caps.

I'm not convinced that Hajime is a loon. I think it's more complicated than that.

She's 100% good. There's not a trace of evil, or selfishness, or resentment, or self pity, or insecurity, in her. Those things affect what we do much more than we acknowledge, and since she hasn't got any of them, her behavior comes off as very strange. But she isn't stupid, she just looks at things a lot differently than the rest of us.

2 My use of the word "loon" in this context was not meant to indicate a lack of intellect. I actually think your assessment is very close to the mark.

3 Here's a picture of Hajime cosplaying as Jun the Swan.