Bonfire of the Banalities Just a quick status update.
For those understandably uninterested in such matters, it's discretely beneath the fold.

Atypically for these posts, the picture of the girl is somewhat related. 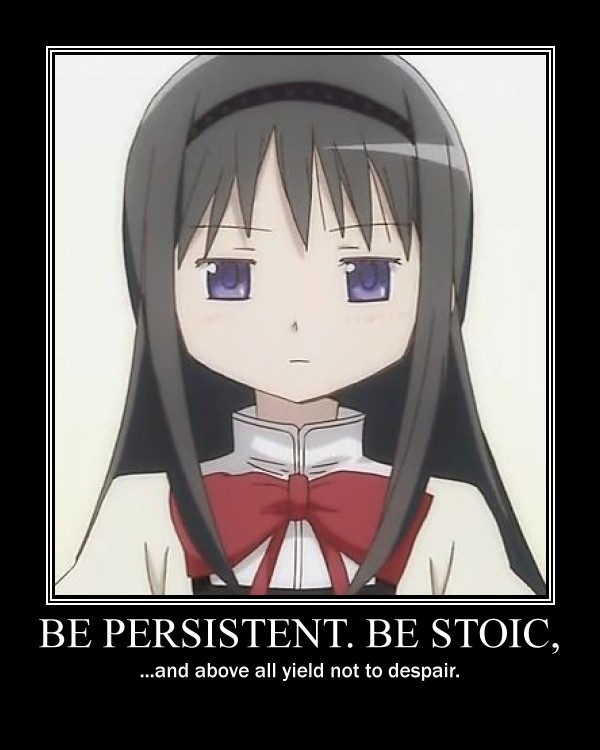 Unamused young lady is the indefatigable Homura Akemi from Madoka Magica.
I just completed my summer semester (with a B average). This is the first full semester since 2008, that  I haven't dropped some or all courses. This brings me to the point that I'm about two semesters  from graduation....Exactly where I was in 2009.

In January of 2009 it looked possible that I'd graduate in December of that year.

By April of 2009, I learned that I'd have to retake 12 credits due to the long time since I'd taken freshman Chemistry and Biology. I also learned that 25 transfer credits and CLEP credits were no longer counted.  Of that 37 credit total, I made 6 up on appeal. Graduation looked like December of 2010. A few weeks later I had to drop out of school as my mother went under the knife for cancer surgery just as dad was coming out with his first hip replacement. Fall of 2009, my home was destroyed in Hurricane Ida, the car died and the truck died, all in the same week. Dad went into the hospital a few weeks later and so did Mom....so..I dropped out again. Between Spring 2010 and last semester, work schedule changes, family medical emergencies,  and my own hospitalizations resulted in me dropping 3 semesters and a few extra classes in the semesters I did complete. During this time they completely changed the requirements in my major...to the extent that I made Oceanography my minor and History my major, because I was NEVER going to graduate otherwise. They also changed the writing requirement...by adding a required course.

Now, I'm back on track, in good health and counting up my remaining credits...I'm two semesters away!

Well not quite...you see there has been one more annoyance thrown at me. Last year thanks to demonstrated practical knowledge, I got credit for the study abroad requirement. The overseas courses are three credits...so this put me three credits ahead...
Well no.
That would be easy... I don't have to pay the 5 grand for the course, but it turns out that I don't actually get the credits...which leaves me exactly 3 credits short, assuming nothing else goes wrong.

I swear, sometimes I think they are just screwing with me.

(Just between you and me..I'm actually betting on the Summer. But, I'm trying for Spring long shot though it is.)

Well, not really. A non-STEM degree is not worth much.

It certainly doesn't in any way financially justify the lost wages and expenses incurred pursuing it. A good argument can be made that the continuing for the last 12 months will just be throwing good money after bad. Indeed, I've spent a nauseating amount of money and over twenty years of my life on this quixotic endeavor. It will never pass any sane cost benefit analysis. However,  I am 9-12 months from a diploma and to quit NOW....well no.


Besides...I've been paying all along...so I have a useless degree and no debt. Unlike these whippersnappers all around me whose useless degrees will come with the equivalent of a mortgage.


In the meantime: Schools out for Summah!