Argh My day began at 3 when I headed off to work. The current inclement weather caused several delays with incoming loads and I was, as a result a little late getting out. I went home to be greeted by 3 police cruisers, 2 ambulances 4 fire trucks and a patrolman who informed me that I could not drive down the dead end road where my house resides.

Hampton Roads was and still is being clobbered as I type this. Hurricane Ida, now a tropical depression, has hooked up with a nor'easter and the two have hit it off and decided to do the barometric boogie all over Southeastern Virginia.

It has rained unrelentingly for 2 days. Totals as high as 12 inches are expected by tomorrow evening. The wind is gusting as high a 67 kts.This is worse in some ways than the Hurricanes Floyd and Isabel. Total damage seems to be less but, whereas both of those storms passed fairly quickly this storm is lingering and actually intensifying a bit. Norfolk is flooded. Tides as much as 8 feet above normal have occurred and are expected. In Portsmouth the seawall was holding as of an hour and a half ago but as I drove through I noted a sand blow coming out of a manhole. The ground is supersaturated and is turning into something with the consistency of pudding. This is not a good thing as the trees have nothing to hold them against the fierce wind. 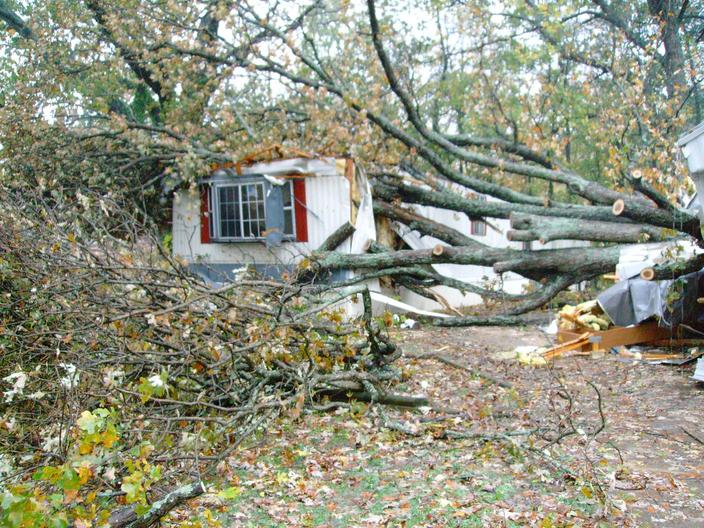 Yes, that is a tree...in MY manufactured home.

In reality I'm lucky. The neighbors child was pinned. The tree fell around 5:30AM  and they were still extracting him at 9. He survived, but I don't know anything about his current condition.

As for my house, the roof is peeled back like a sardine tin, and although it does not show up on these pictures it was (and still is) raining intensely. After they finished pulling the injured out of the other trailers I briefly inspected it and tried to cover a window that had popped out. I left to get a tarp and was immediately stopped by a fireman who informed me that all three trailers are condemned and I need a safety inspection to enter again. I can't even get my stuff out and try to salvage my things from the rain....and most ominously, the rising water.

While crossing the Monitor/Merrimack bridge tunnel, my newly acquired Cressida got pummeled with brown water as a wave actually broke over the bridge. The car began acting...odd...and would not start when I tried to head back home. I jumped it and took it to the repair place in Churchland.

Dead alternator and solenoid. Not entirely astonishing given the age of the car ( 27 years) and immersion in brackish water but damned poor timing.

Because I've been house sitting and was helping my folks deal with medical issues earlier in the year I have a few changes of clothes at my folks house and a couple of DVDs and books too but I may have lost nearly everything else.

Still, I have a job which is a very good thing in this day and age and I was not impaled by the tree.  I've got crash space at my folks for now which is most fortuitous. Even if the trailer is totaled, I'll be able to get it hauled away thanks to the insurance.

1 Wow... I don't know what to say. That's not something that anybody expects to come home to.

Lucky for you that you work the morning shift, I guess. Hope everything works out with insurance and such.

2 Yikes.  At least you're safe - the tree fall and the wave over the bridge both sound pretty dangerous.

Let us know if there's anything we can do to help.

3 I know (almost) exactly how you feel.  My place was smashed in during a storm back in '85 by a bay laurel tree with not enough roots in too-soggy ground.  The firemen sawed off enough to clear the road, condemned it and two others on the hill...then left.
I immediately went back inside and saved as much of my stuff as I could.  The house was still standing three months later.
So it all depends.  I paraglide and dive a rebreather.  Your tolerance for risk may vary from mine (it's astounding I've reached 49).
And to add to the "I know (almost) exactly how you feel," my car was completely flooded out, up to 6" from the roof.
Still, it's a shock.  I was sort of dazed and confused for a few days.  You sound remarkably together.  I'm impressed.

There's very little that's good about this, but I agree with Andrew that it's very lucky you were already out of the place when that tree went down.

I hope that boy is all right.

6 That really does suck.  I've twice been missed by falling trees by a matter of feet, and I've got a massive tree on my current property that makes all my neighbors nervous and will probably have to come out next summer.

On the other hand, it can always be worse.  Some friends of the family had a tree take out one entire wing of their house a few years ago, while they were out of the country over the Christmas holiday.  They had to cut their trip short and come back to deal with the mess, and they lost most of their possessions to either the tree, rain, or looting.

8 That's...wow.  Words fail.  I lost a computer to a broken water pipe over Christmas in college, but that was nothing.

Now I fear the giant elm in my neighbor's yard which looms over my daughters' bedrooms.

Damn, really sorry to hear that, glad your safe.

10 Wow, I'm really sorry to hear about your house, but I'm glad you're okay.  Let us know if there's anything we can do.