66 Years Ago On August 8, 1945 Emperor Hirohito was presented with a report. The report concluded that the annihilation of Hiroshima had indeed been the result of an atomic bomb. The report went on to state that the US could not possibly have enough nuclear material for any more bombs...America had blown their wad. Thus, to have used this powerful weapon indicated desperation on the US side and that the Americans had no stomach for an invasion.

The next evening, August 9th, the Emperor received yet another report, this time from Nagasaki. The Americans had blown their wad...again.

Over the previous weeks bombers had hit 35 cities with leaflets. This did not bode well.

Now, Hirohito was not a strong Emperor,  but he was aware of and had explicitly and implicitly approved the whole horrid mess. He knew damned well what had gone down in Nanking, and he was quite aware that the Americans would be looking for heads as payment for Wake island, and the rape of Manila. His would be the most sought after head. Nevertheless, to save his people, he decided to accept the unthinkable US demand for unconditional surrender. When he informed his Generals and ministers of this and the fact that he intended to personally present himself to the allies, there was an uproar.  The little man stood by his guns however and after 4 days of heated deliberations he went to the palace and made preparations to broadcast the news to the Japanese people.

Then, on the night of August 14-15, over one thousand troops led by Major Kenji Hatanaka stormed the Palace to prevent the surrender. 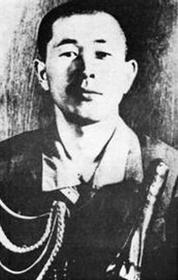 
However, the speech had already been pre-recorded and the phonograph record containing it had been hidden, so the soldiers began tearing the place up looking for the recording. A general and a colonel were murdered  and an office building was set afire. Meanwhile, the phonograph of the surrender was smuggled out in a basket of womens underwear. Early in the morning General Shizuichi Tanaka drove into this mess himself and singlehandedly ended the coup, berating the officers in charge and dispersing them. 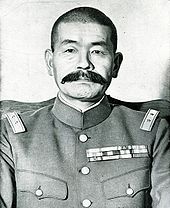 
Kenji Hatanaka later attempted to force his way into the nearby NHK station to stop the broadcast and plead his case. This was spectacularly unsuccessful and he ended up killing himself in the street. At noon, 66 years ago today, some NHK DJ broadcast a tape that saved countless  lives and effectively ended the Pacific War.

1 Nice post.  And not to make light of a serious subject, but THAT is an EPIC mustache.  Professional, indeed.