One of THOSE Days
DISCLAIMER: Clip of confectionery bliss is pleasant and cute. As such readers should be aware that it is completely unrelated to the pictures and text below the fold.

Those suck...
Thursday, I left work and zipped over to my trailer to cut the grass, and if I had time, sweep the roof. I also wanted to get everything ready to put in the new water heater Friday evening. As many of you know I've been staying mainly at my folks house due to the perfect storm of health issues that has befallen my mother, father and grandmother over the last year. I've slept at my trailer about 2 days in the last month.

As has been the case the last several times I've cut the grass the yard had debris in it, though this time it was rather less an issue, some trash and a table...no sinks or iron bars or anything.... 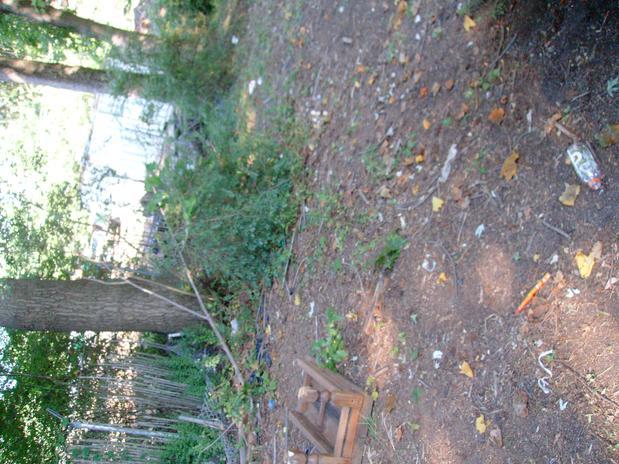 Oh...and a hibachi...(I don't own a hibachi)
Wait, whats that beside the hibachi?
Uncle Owen?
Aunt Beru?
Seriously....WTF? 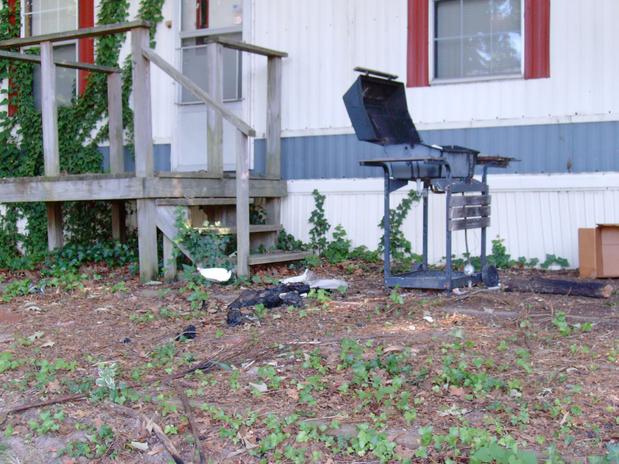 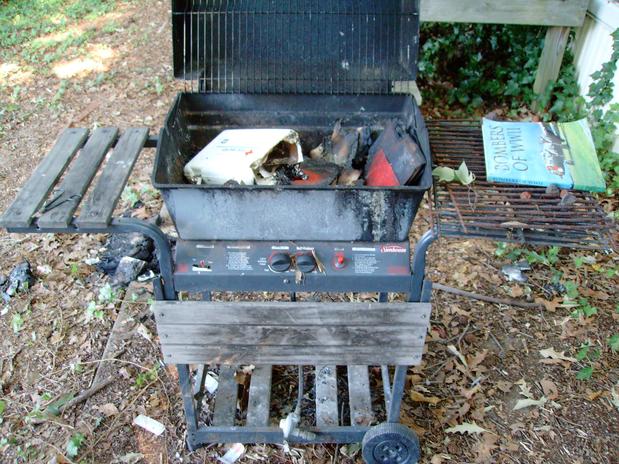 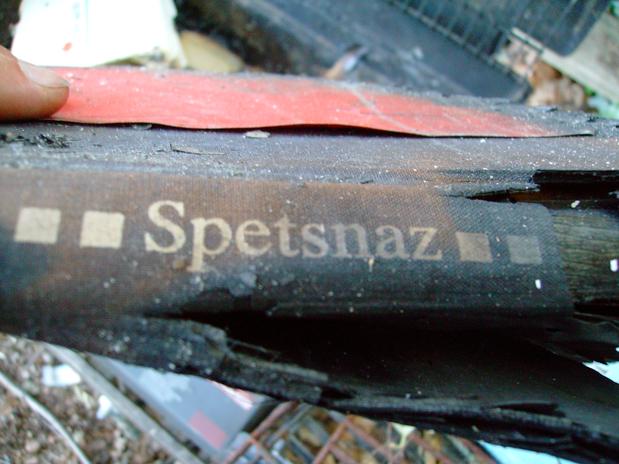 The interior is trashed.
But in a very strange fashion.
The intruders had busted out the window of the rear door and unlocked it. letting themselves in. They then got medieval on my stuff. 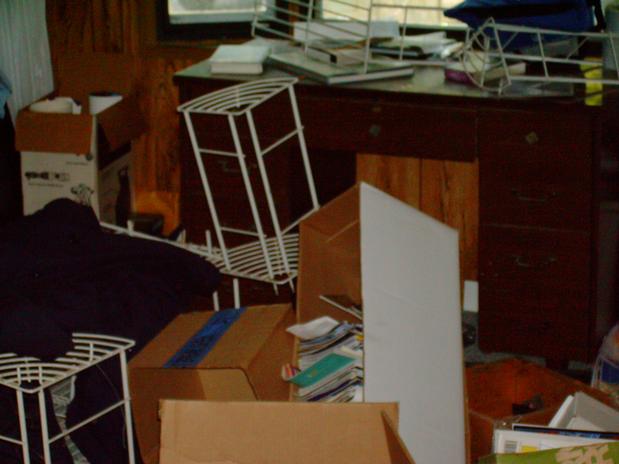 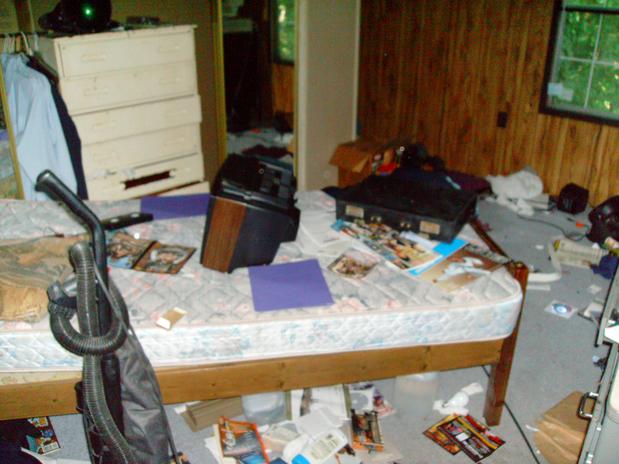 Missing, the DVD player, ALL my tools as well as some of my dads, the single shot shotgun, and some metal Toho Monster models. They left the TV, the stereo (but smashed it, possibly trying to unhook it) and many DVDs but they broke quite a few. The American flag laid out flat on the floor, next to the gaping hole under the broken out window due to the fact that it has rained torrentially here several times over the last two weeks. This window was, evidently well placed to recieve it (there is no tree outside of it) There was still standing water in the bathroom, but here the floor had fallen out. 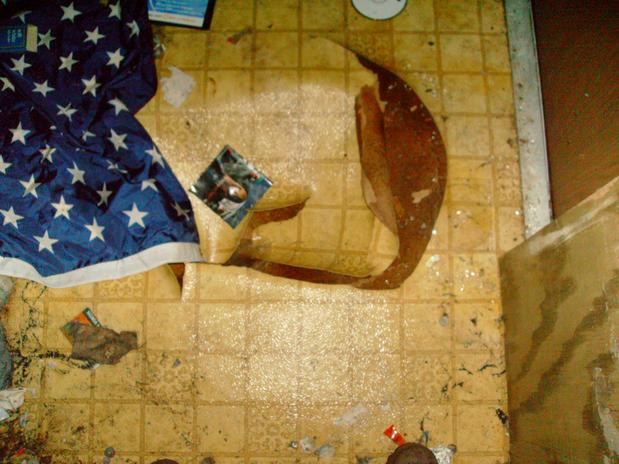 The water damage is actually worse than either the burst pipe (which was under the trailer in any event) or the burst water heater or the pipe that popped off and shorted the last water heater.

Lots of stuff moldy or water damaged and comics thrown to the 4 winds. DVDs cracked, out of their cases, and just chaos....but the mystery hibachi with the burned books is the weirdest thing. This was utterly random...they left the laserdisc player for instance, but I cant find an LD they didn't break.
What in the HELL? Newport News cops see a lot of weird, but this had the policewoman scratching her head.

Oh and they smashed all the external lights.

The adjuster comes to adjust Tuesday, (in the middle of one of my classes ...natch). I'll be quite surprised if I get anything though, my deductible is high and the coverage is minimal.

On the way to school I got caught in the mother of all traffic jams because the local traffic infrastructure imploded...so I missed school.

The day was a TOTAL loss.

Man, things just haven't been going well for you, have they?

2 This just makes me sick. Theft is bad enough but greed is something we can all comprehend. The vandalism however is just evil. I hope they're caught and put out of circulation for a while before they can do this to anyone else. I hope your life gets turned around soon and good things start coming your way. You deserve much better.

3 we'll be bringing stuff your way this week.

4 Ken - when the adjuster comes, you'll be tempted to cut the conversation short and to short change your own stuff - well, DON'T.  Be meticulous and list EVERYTHING and give an accurate price of what it would cost to replace.  I mean EVERYTHING.  If they broke three dozen DVDs and it would cost $20-$25 to replace each, then make sure they list it.  If a collectible (or not) Roman Album has a ripped cover, include it in the list. The little stuff in a house adds up mighty quick, so regardless of your deductible your insurance should cover a good bit.

Some pond-scum came in and wrecked your stuff, and now the insurance company has a responsibility to cover it - since you make monthly payments to them to ensure that they do just that.

5 And when you appraise, go with the high value because after they get your appraisal, they'll mark it down 20-50% for deprecation. At least that's what happened to me. Sorry that you're going thru this, it blows.

6 This is terrible! I am so very sorry! This looks like it might have been person. Maybe I am paranoid.

8 That looks personal to me.  I'm so so sorry Ken. If you need to talk call me.