RWBY Season 7 RWBY's 7th season having just wrapped up on Crunchyroll, it warrants some comment. But first a brief review is warranted of this shows history. Initially started with  a pilot that showcased its tragically low budget, superb voicework, spectacular fight choreography and great promise, the show proceeded to be almost schizophrenically uneven but maintained interest with its interesting characters and  its setting, while something of a cliche' buffet, was genuinely intriguing. The first season was enjoyable despite itself and showed real promise.

The next two seasons got better, surprised its audience, and while the action animation never recovered from the death of Monty Oum midway through the production of season three, the other production values, story and characterizations got exceptional. ...until the season 5 finale which was a fight spread out over approximately 377,482 hours of tedious soliloquy and nothing happening. Season Six was much better, the production values being incredibly good and the story itself having regained its stride, though the finale was a soft cliffhanger.


Rooster Teeth has had its issues of late and its management has seemed to go out of its way to antagonize some of its fans. The company is no longer the 20 or so people punching above their weight but is rather, now, a division of AT&T which makes this seasons enhanced production values pretty much expected and the production problems reported in the media fairly inexcusable.

Given the internal issues being reported and the various clashes with the fandom, one ought not be surprised if the show is a dumpster fire.

Instead, the surprise comes from Season 7 kicking ass.

This season gets right almost everything that slipped through the cracks in season 5. In particular the pacing is solid throughout, building tension throughout the story to a genuinely gripping season finale.

Even the fight choreography has improved to the point that it's finally approaching parity with the late Monty Oum's work in season's one and two, as this two minute clip from the season opener shows.


This is, hands down, the best season of this show ever. Story wise, the show manages to throw all manner of curve-balls while still retaining its internal logic. There is a little bit of perfuntory advancement in episode two '"Hey! Everybody gets new uniforms!" but almost everything else is beautifully paced and even the surprises (and boy are there surprises), make perfect sense as they're bringing together threads from six other seasons.


This brings us to the two minor quibbles with the show, one is that a lot of the plot is not fully understandable if you haven't seen the previous seasons, (which, sadly means watching season 5). Oh you'll be able to figure it out, but you'll lack that delicious moment of realization when the waiter smiles.

There is also another issue which has caused some consternation in some circles. 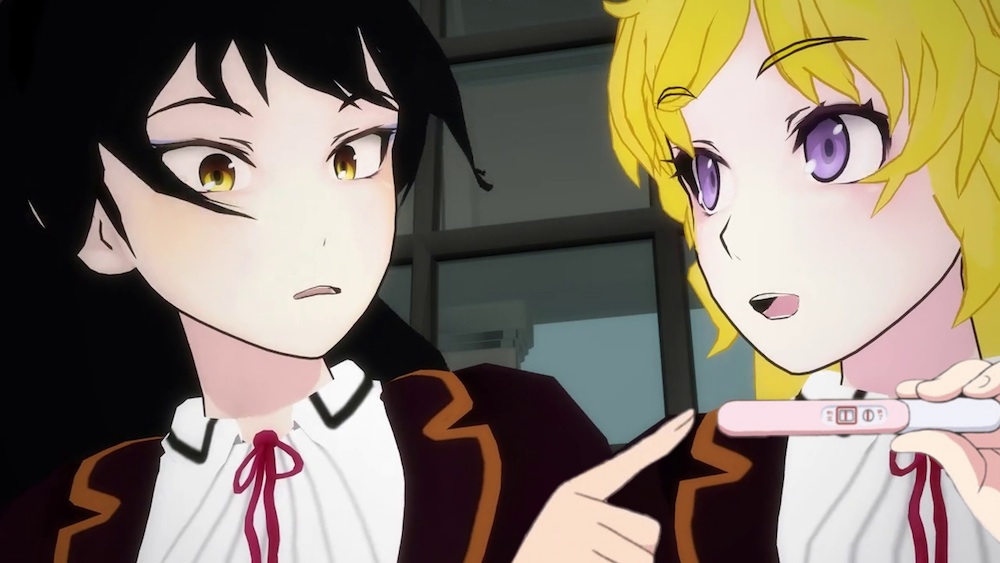 
Now, Yuri is not necessarily a bad thing and its a shame that it has become co-opted by those who are aggressively obnoxious. Indeed Yang and Blake, (who at this point need to call a moving van) in the absence of context make a cute couple.

However, in the context of the series, you see, they've both been canonically straight for 6 years. Blake has a boyfriend (Sun), one that she met in season 1 and who dropped everything to help her out at great personal risk, nearly died for her, whose life she saved and who she had a very well established mutually respectful relationship with. She even rebuffed advances from a gay friend, because she 'did not swing that way'.  Yang, is introduced in season 1 as decidedly heterosexual.

Now both characters have a close bond as the source of much of their personal traumas was Adam (Blake's psychopathic ex boyfriend...who Blake had because Blake is straight) and their teaming up to deal with him last season was immensely satisfying. However the idea that this made them gay is kind of bizarre, and since this development was so obviously forced that it might behoove us to revisit an important fact.

Women can be friends with other women...and not be gay for them.

I know that's a hard concept for the allegedly woke to grasp, but it's true.

One more thing: There is one individual in the show who could have been gay as there is  no previous indication of their orientation and there wouldn't involve retconning 6 seasons of canon. That would be...Ruby. So no, you're not stunning and brave, you're just virtue signalling quislings. Fortunately, the rest of the season was well written enough to allow us to ignore this silliness and hope that the lack of any formal announcement on their part indicates that the rest of us are just reading too much into the obvious gay baitng and are just pervs.

Also, let's hope that Blake and Jaune can do something to fix those terrible, terrible haircuts.
but honestly even that development doesn't really detract from the show this time around.

This was just a really solid season and I find myself looking forward to the next (probably last one) with genuine eagerness.

1 They also screwed up the model of Blake's face. It's like they slid her nose and jaw down and forward. It really stands out at the final image in the OP.