A Mystery Solved  Bleach has a lot of things that are fantastic and strain credulity...magic, superheroes, multidimensional travel,

invisible monsters and psychic powers. But few things strain credulity like the fact that Orihime,  is pining after our hero and he is either oblivious or is ignoring her attentions....

This should fail the suspension of disbelief test...she's a bit odd, indeed goofy on occasion....

....but she's a very interesting, intelligent person with a strong moral compass and general decency and is cute (and a  chesty Asian redhead!?) Yet he is utterly oblivious to her attentions.

Invisible monsters I can handle...but this....

Also, If you prefer your Finnish earbugs with a more contemporary flavor (and to eventually end)  then click below....you know you want to.

1 I've got no idea what you were trying to say there.

That clip is actually sort of soothing. Maybe memorizing is a better word. I could watch and listen to that for hours.

2 Gah!  I was kidding before, but now I can't stop listening to it.  What the heck is it?  It sounds like a jazzed up version of a Russian folk song with nonsense syllables in place of words.  It is driving me nuts.

3 I guess I'm slow. I finally figured it out.

It's a Jewish folk song, not Russian, and her hair clip is replaced by a Star of David. He doesn't like her because she's a Jew.

Not so funny now.

5 I wondered how I missed this, and then I realised that this was posted the week I was dead of food poisoning.

We're both a year behind the event.  I don't know whether that is good or bad...

Well that last post was a downer.... Here is an official Chun Li pic as compensation 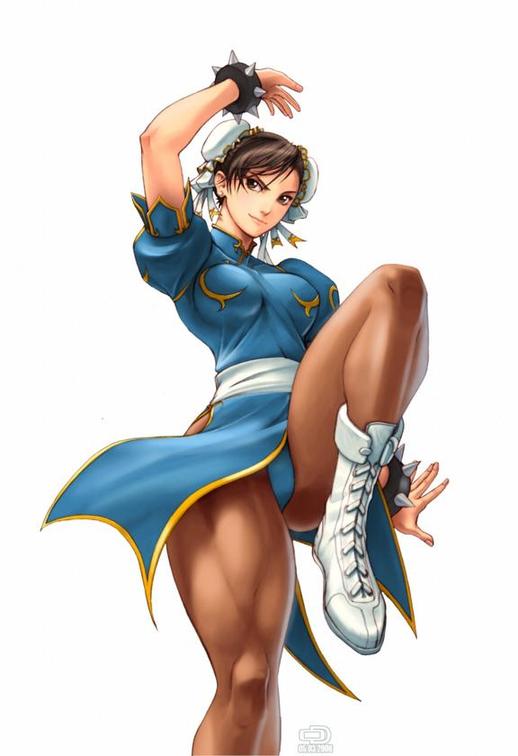 Diet Aids Few things are as unhealthy as snack chips.
Now the Japanese have found an innovative way to not just discourage people from eating nabs but actually give them such a sour stomach that they may skip lunch altogether!
more...

So...What IS the Word for a Japanese Tulip?
Stephen Den Beste recently posted on fansubbers as one challenge the US anime market is facing. I think that is only one of several problems facing what are  fairly young industries.

IMHO quality  is a big one, though this applies more to Manga than anime proper.

There are some good anime/manga series out there right now, but those being liscenced and particularly the Manga being released are really haphazard and far lower in average quality than (I think) a random sampling would be. A few hits are being brought over and some of them are actually quite good, but several of the few gems are wallowing unnoticed.
I suspect that  the distributors are just buying the crappy cheap properties. I further suspect that this issue is doubly true of girls-Manga as the distributors largely don't even have the beginings of a clue what to look for.
I think the US import comic market is being sustained primarily by faddishness and a group of kids at 'the age of disposable income'....when these people become discriminating consumers, the importers will have to become discriminating buyers....or collapse. Note that given the current size of the import companies this will be a hard thing to do quickly.

I think a retrenchment is inevitable (and indeed seems to have already begun). In its short history (10 years or less) there have, of course, been ebbs and flows of the manga market. (The anime market has been somewhat steadier in part because the greater capital investment slightly disciplined purchases. )
However, I think there may be a Marvel type retrenchment for both on the horizon.  Soooo much of the current product line from most companies seems to be crap intended to fill shelf space.

I have no evidence that there is any psychological maladjustment on the scale of Marvels monomaniacal focus on market share in the early to mid 90's. However, the current market, particularly the manga market (where the only real growth lately seems to be in yaoi manga), seems rather unsustainable in its current form.

I think that many of the same problems, less pronounced perhaps,  are going to afflict the anime market.

1 Er, where have you been? The retrenchment happened already. ;p

Yes there have been retrenchments already...I just think there's a rather larger one coming.

As I said, I think this applies much more to Manga than Anime, but the US Anime market has to deal with this and other issues as well.

As far as specific titles not having come over yet, well, that comes of dealing with the Japanese. If you're used to moving a million copies in Japan, it's hard to scale down mentally to the kind of money that the US market is really worth. This isn't so much the case for anime anymore, because the US market for anime is actually pretty large by comparison to the Japanese one, these days; but the US manga market is smaller, and the Japanese one is way, way, way bigger, so the differential there is greater.

To put it bluntly, the US manga market exploded in size when the bookstores started stocking manga. The market continued to grow rapidly until it ran up against the limits of space that the bookstores were prepared to devote to it; in that time there was certainly a lot of crap licensed (some of it by us, heh.) Then came a crunch, and now there's fewer titles (and the retail buyers are being pickier, too.) But the shakeout is essentially over - Del Rey got in and a couple of the smaller players got out, still plenty of good stuff coming over. Nobody who was a manga fan through the 90s is complaining, I assure yez. ;p

When Life Hands You Lemons... 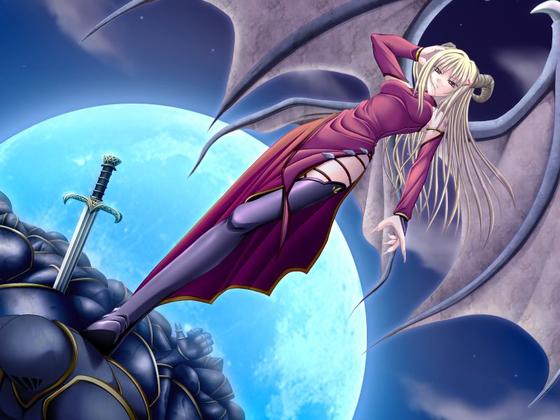 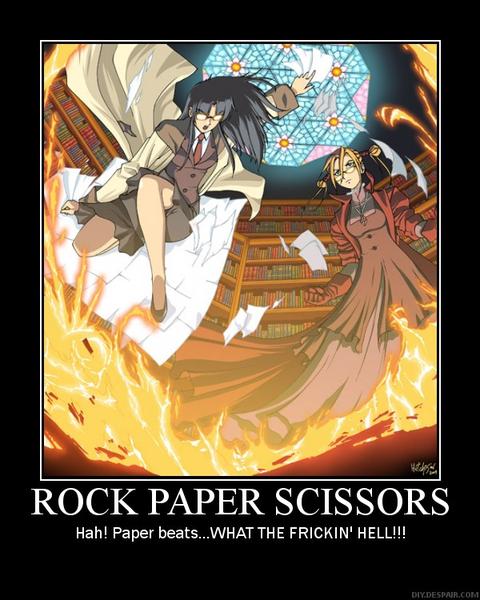 1 More like "I knew Christmas paper was flammable but this is rediculous!"

There was a girl at AnimeNEXT who was cosplaying WH Robin.  In a corset.  A really tight, exposed corset.  Talk about missing the point... at least she had the handle-bar hairdo.

Fireworks Carnies and Samurai...Oh My! Don has a nice post on Oh! Edo Rocket!, which I've mentioned in passing before.

My observations, having seen just 2 eps pretty much jive with his. That is, the show is cool.
The weird amalgamation of seemingly incompatible character designs is, distracting to some. Aside from the odd Matsumoto show I haven't really seen design variations in a show this extreme in nearly 20 years.
This show is fun but not really fluff, the villains we've met are actually scary, and there is the cool bit about it being based around actual historical events. (It's almost certainly occurring in 1840s during one of the later crackdown on "luxuries" ). The protagonists are a bunch of carnival types put out of work by the sudden illegality of their trade.

They've combined October Sky, Freaks, Kolchack :The Night Stalker and any number of martial arts shows...(some of my favorite things )and made a cartoon out of them. I am going to HAVE to watch this show...after all it's target demographic is....me.

Update: Don also has a videoblog now....which includes amongst other things...The Abacus Dance.


...while this doesn't actually look to be "good"...It does have the potential to be gloriously bad,

1 That was so awful I was laughing pretty much the whole time.

BTW, blog all fix!  It was a glorp in your header template, setting the base URL for the page to "page.base" instead of "[page.base]".  The square brackets are very important.

The mystery isn't that what Brickmuppet did broke the page. The mystery for me now is why it didn't break it for all browsers.

Probably not worth figuring out, though.

4 The code in the header template sets the base href for the page for relative paths (this is needed to make relative-path images work in category and archives pages, for example).  What's happening is that IE is using it incorrectly for paths that are absolute but not full URLs, where Firefox handles it correctly.  Or it could be that the standard is the other way around... who knows.

Guilty Pleasure...So Much Guilt Needs More Pleasure I just found out via Ubu's site that Stephen Den Beste is ordering Godannar...I can't help but blame myself. I was remiss in my blogging duties, I did not warn him.

Rather than struggle with explaining the rather complex setup I'll rely on ADV's own ad, which, to their credit is one of the best, most honest, series trailers ever.

1 Heh. I'd forgotten that ad.  Yep, it sums up the series perfectly. Good spot on Dr. Aoi's, uh, accident there.  Somehow I missed it completely.  What episode was that?  And how much of the series did you watch in slo-mo, hmmmmm?

I echo the complaint; there are NOT ANY VILLAINS.  The mimetic beasts are a very, very, thin excuse for opposition.  It's obvious at time that they're acting with intelligence, as they even execute a strategy to take down Dannar base, which failed only because of a specific design feature (given away in the "second season" previews).  I kept expecting some sort of grand revelation as to what or who was really behind it all, something like we got in Shingu. I figured someone we knew was going to have a secret role.

Well, I was right about that last bit.  Just not how I expected.  I don't think it's a good thing when you see "the major plot revelation of the series" and break out in howls of laughter at how stupid and illogical it is.  I mean, no "refrigerator moment" here; no such appliance was going to wait that long. Instead, it came over to the computer and mugged me.

2 From that description it really does sound like Gravion. Some of the later revelations in the second Gravion series were less "Shock!" than "You can't be serious!" or "You guys can't be that stupid!"

Some of the later revelations in the second Gravion series were less "Shock!" than "You can't be serious!" or "You guys can't be that stupid!"

For some reason, I'm hearing that in Pedro's voice....