Obligatory Pool Episode The last episode of Interviews With Monster Girls was indeed a pool episode and broke new ground in prurience with this uncensored frontal shot of Kyoko without a stitch on her. 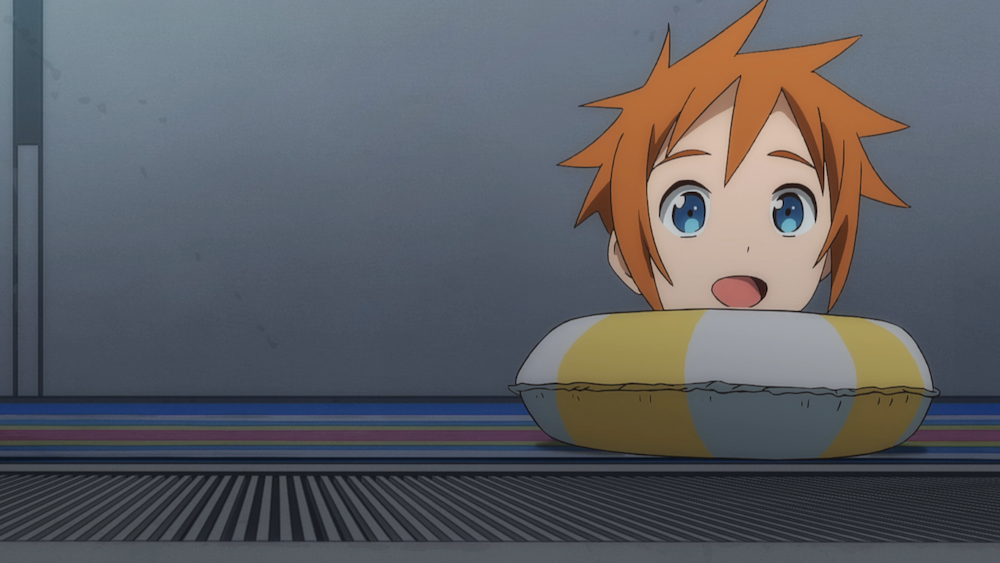 " I LAUGH at your guillotine!"
I hope they do more in the coming years as this series really was a gem. 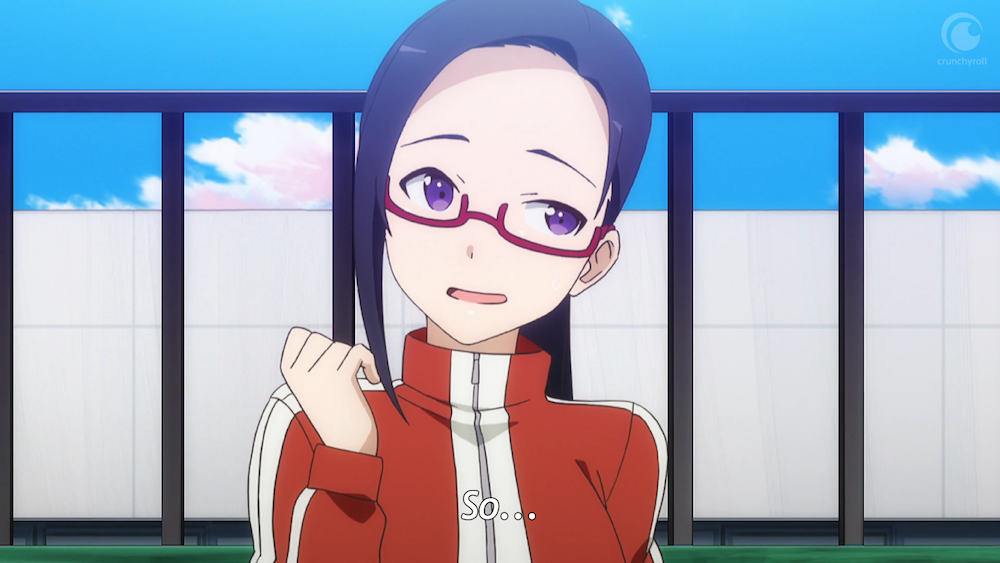 So...the latest episode of Interviews With Monster Girls addresses the nagging concern that Takahashi has become not so much the girl's counselor, as the driver of their short-bus.  The sinister assistant principal's true motivation is revealed and Sakie, though forced to improvise, nevertheless achieves an important milestone in the...umm, subtle and cunning machinations she is plotting in pursuit of her goal.

In contrast to episode 7 and especially episode 10 which hinted at a much "bigger" storyline, episode 11 is focused primarily on character development and nicely portrays the considerable personal growth the entire ensemble cast has gone through, including fairly minor characters.
This episode really touched on everything that has made this show so refreshing. The students in this show, both human and demihuman are   very believably written and their actions are both charming and realistic. 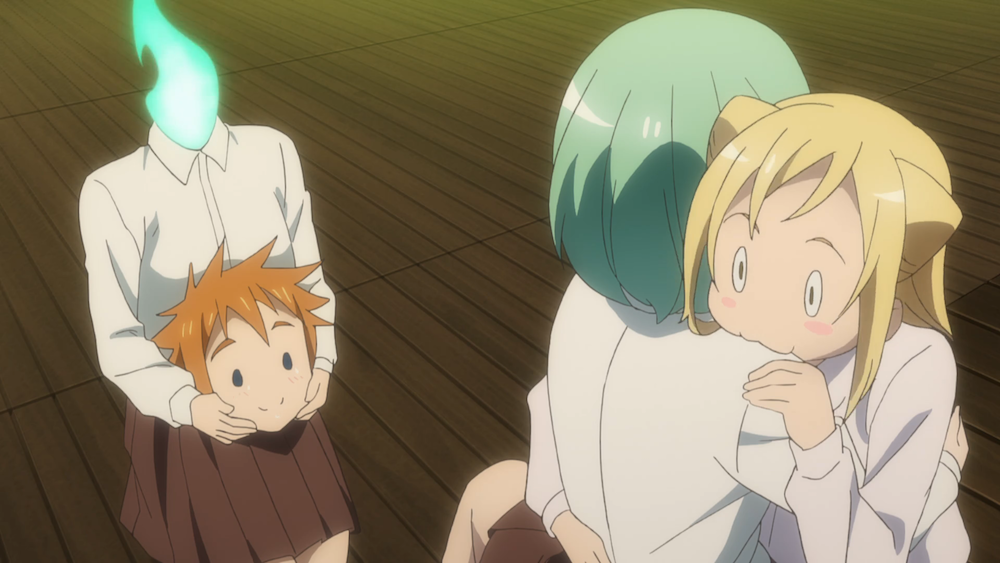 Within limits.
I'm unsure how many episodes this series is, but if it is a 12 episode run then this was a solid and reasonably satisfying finale. Of course there is at least one more episode. However, there are indications that that will be a beach or pool episode and therefore probably fanservice pandering best ignored in the context of this nearly sublime little series*.
One thing that stands out above even the stellar chraracterizations of the students is that of Takahashi Sensei. Here we have a male lead who is not only a gentleman that behaves in a professional and mature manner. He's a remarkably macho guy as well. In addition to being a science teacher, he's a weightlifter, and characters comment on how much he's bulked up recently. In any other show that would be a character trait of a buffoon, but Takahashi is stoic, disciplined, kind, perceptive, intelligent, intellectual and strong in both body and character. He epitomizes the male virtues and in a thoroughly positive way. That is a rare and welcome thing in this day and age.
Interviews With Monstergirls has been low key but engaging. and a thoroughly enjoyable ride that stresses the importance of actively engaging life lest  wonders pass us by. 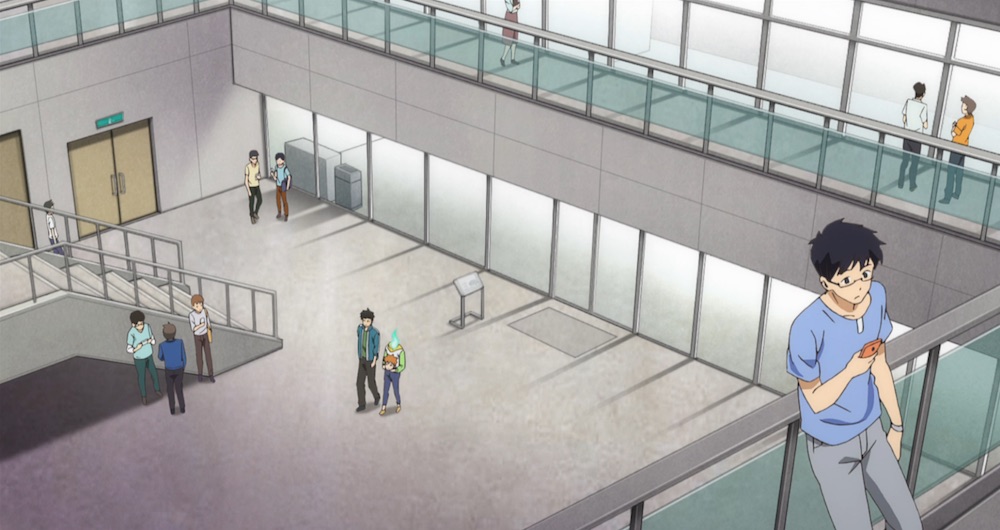 No. Twitter is not "engaging."
If you've missed it, watch it.
If you've seen it, discuss it.
* Unless it includes a good deal of Sakie fanservice, in which case such an unwelcome (if predictable) development would indeed warrant  thoughtful study and comprehensive analysis quite in isolation from its unwelcome effect on the tone of the show.

1 Confirmed 12 episodes; I just checked the schedules on two of the Japanese networks that air it (GTV: 3/25 'owari').

I'm figuring on a cold-water mountain spring for the "...want to swim" finale. They're going to need a lot of ice water to keep Takahashi-sensei rational after he sees Sakie in a swimsuit...

2 As usual, I hitched my torrents to the wrong circle. It's getting so I can't trust anyone rated Blue.

4 Yes. Yes I did. That is exactly what I meant.  Thank you.
However, your comment now seems strange to casual readers as I've cunningly and sneakily modified the post.

5 "A Runabout! I'll steal it!" One of my favorite bits from that cartoon.

The Means by Which Dulhallans Eat ...has yet to be addressed in this show, but despite that glaring omission, as of episode 7, Interviews With Monster Girls is mostly living up to the hype. 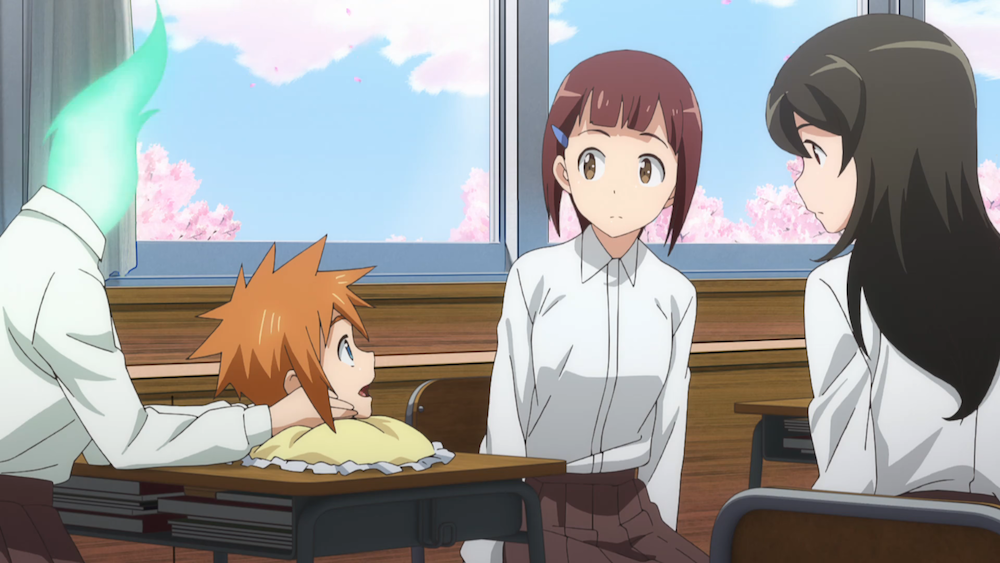 "No. We understand how it gets into your mouth, it's the step after that which has us confused."

A biologist whose PHD thesis on demi-humans was shot down due to a lack of any preternatural people to study, abandons his research and gets a job as a high school biology teacher. Years later, he is surprised to learn that his school has enrolled a dulhallan, a vampire and a snow-woman. He begins his research anew arranging interviews with the fantastical beings and with the help of a delightfully goofball math teacher, councils his students and watches as they cope with all those little awkward moments every high school kid goes through. 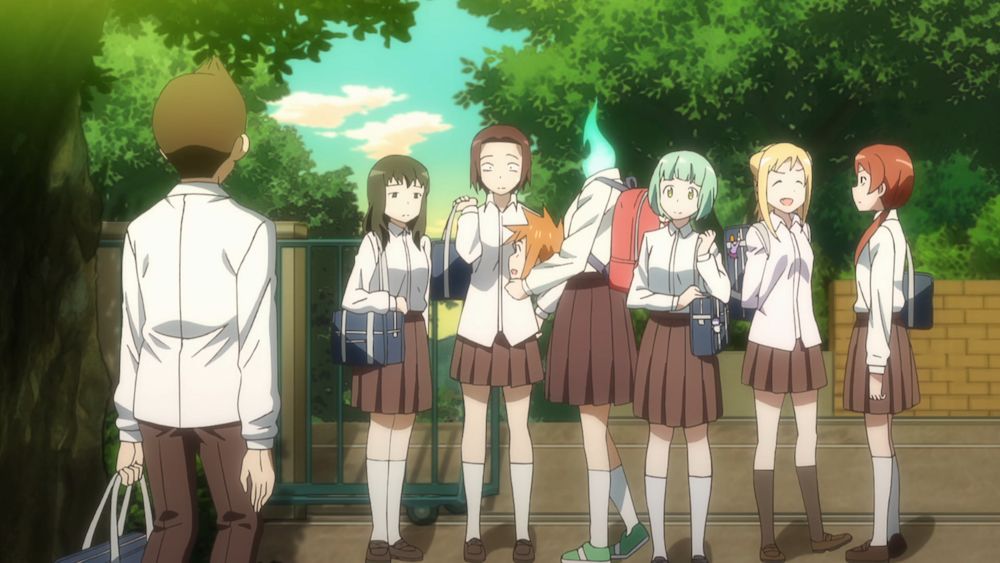 Well, in fairness, she could have been more clear.

This is a surprisingly well done story.  Cute girls doing cute things in high school has been done a lot but this show has really good characterizations and despite the centrality of the monster-girls quirks.... 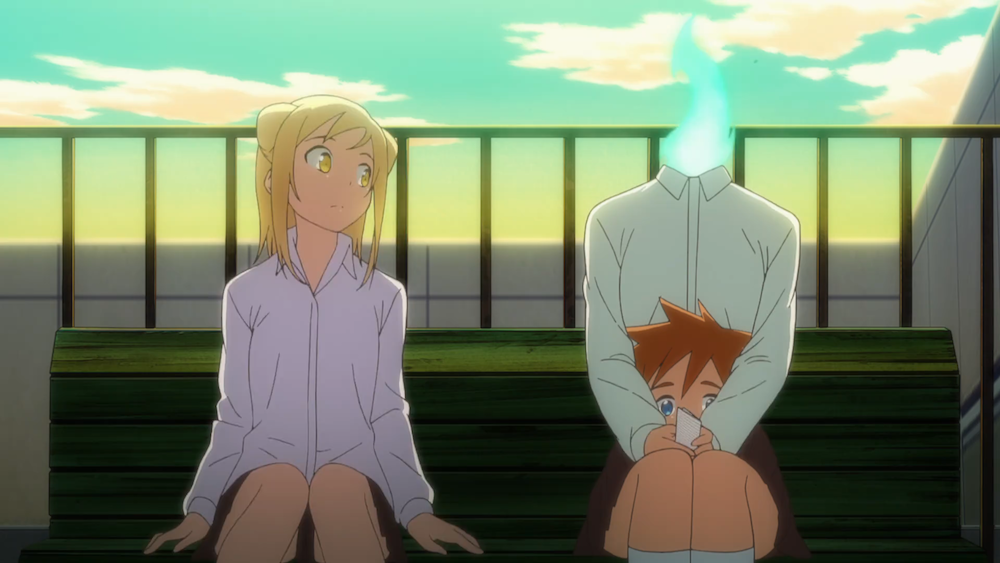 "I will never really get used to that."

...they come off as some of the most believably characterized kids in a long time. Cast-wise it treads perilously close to harem territory, so it's very welcome that at least one of the schoolgirls has (maybe) a tentative romantic interest amongst the student body. It's even more welcome that the aforementioned delightfully goofball math teacher is around.

More welcome still in our decadent age is that this show actually stresses the virtuousness of men aspiring to arete' and thereby maintaining a stoic demeanor in stressful situations....
...and dealing with one's emotions in private so as not to bother others. 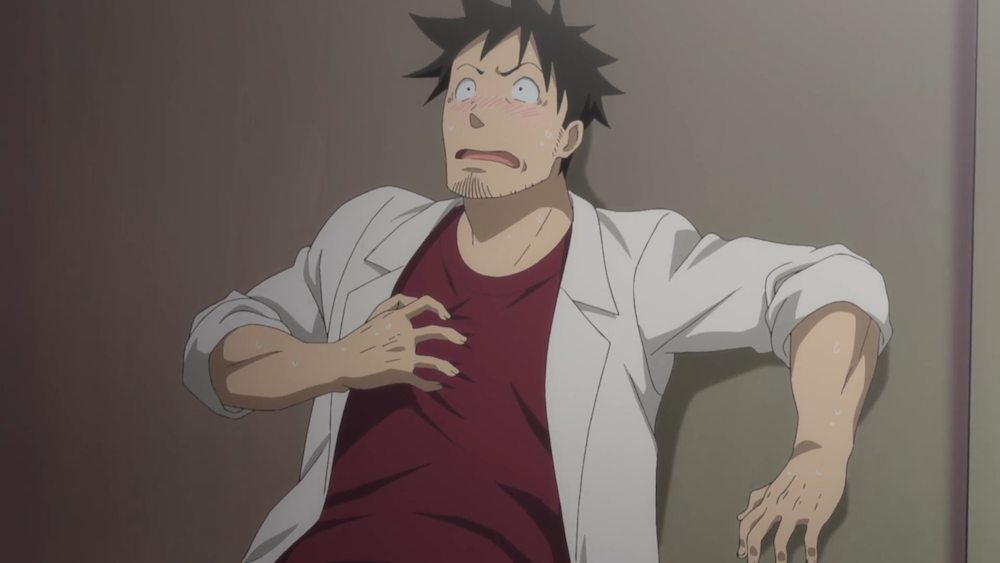 "!!!!!!!!!!!!!!!!!!!!!!!!!!"
Did I mention the delightfully goofball math teacher?
Interviews With Monstergirls is, despite its premise, surprisingly down to earth and well written.
Now there are tentative indications as of episode 7 that there might be more to the story than a high school slice of life show.
That could be disastrous, or it could be awesome. At this point, even if they brought in giant robots that trapped everyone in a video game, I'd still watch it for a couple of episodes to see what they did because I'm that enamored of these characters.
I'm just gonna recommend this one.
UPDATE : 72 Minutes and 3 episodes later:
Well, what do you know. They do address the question of the day... 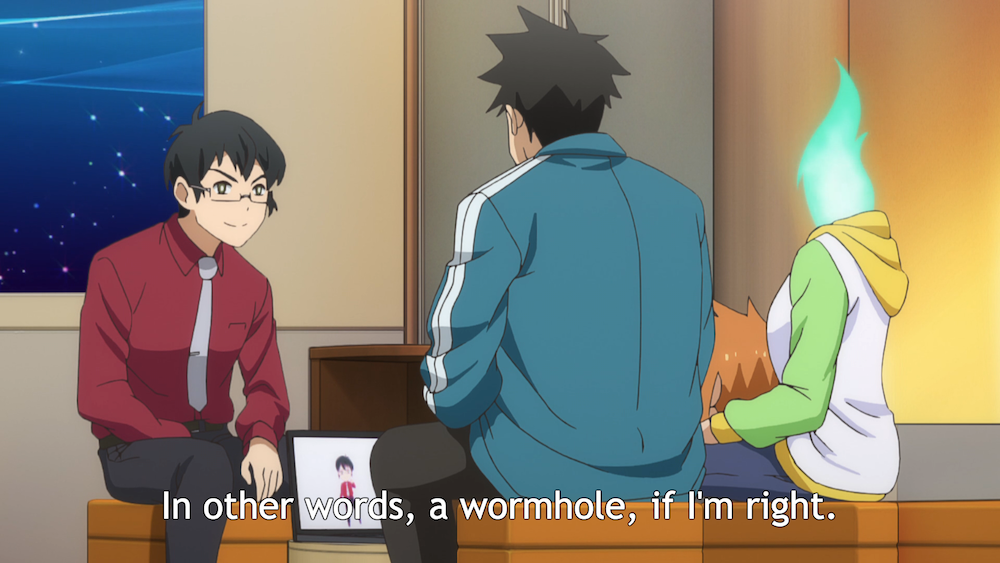 1 ...they come off as some of the most believably characterized kids in a long time.

I still think that Hikari is the single most believable representation of a teenage girl I've ever seen.  Despite the nibbling.

2 One ex-girlfriend was a nommer. They're out there. (She also had an aversion to bright sunlight and a mischievous personality, but fortunately, no need to metabolize hemoglobin. She was just an ex-goth...)

Flip Flappers is an exception, though after finally finishing the entire series, I find it still quite difficult to describe. The set-up is easy enough, Cocona is an honor student in high school and her ultimate goal is to...umm....be an honor student... 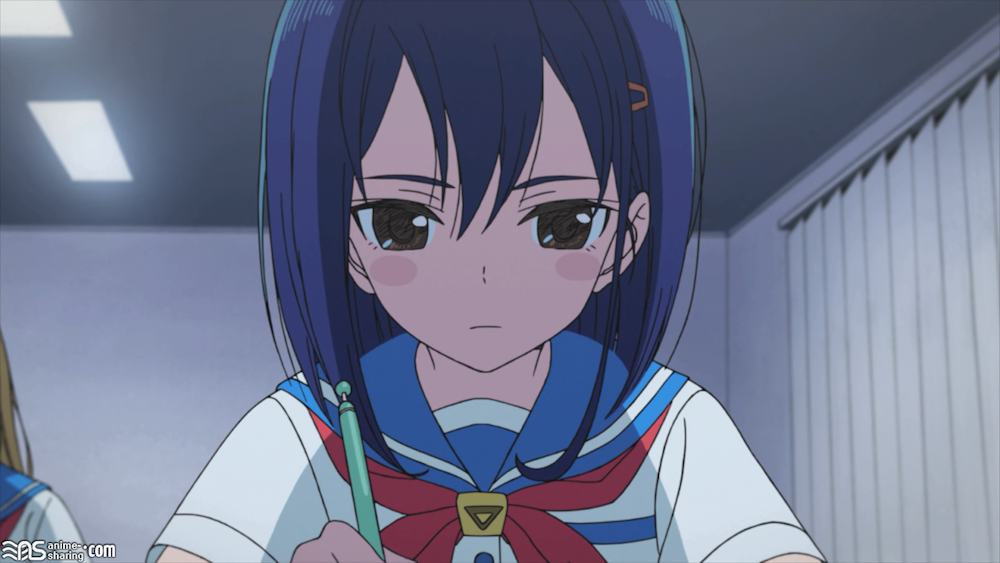 Life however, involves more than just studying for the test, and Cocona is trying to come to grips with the fact that the answer to "What career part do you intend to take?" Is not found in a book, or in any academic articles. Suddenly a crazy redhead named Papikka shows up with a comic relief robot and drags Cocona into a magical dimension to help them find...power crystals.

"Will this be on the test?"
Sadly, they don't keep the bunny ears, but they DO get time limited super powers accompanied by magical legware. 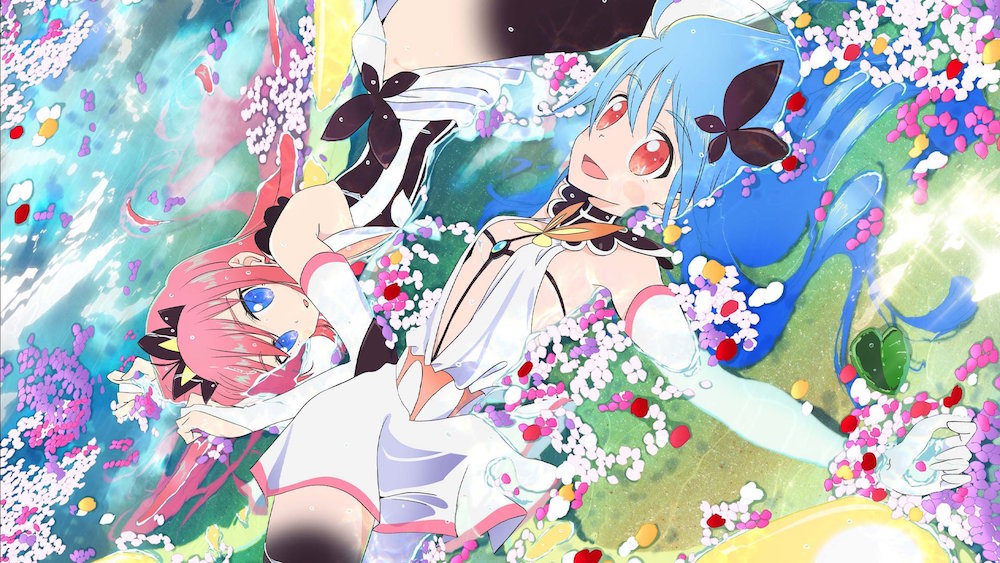 'dem stockings...
This is useful as well as stylistically fascinating because they do get into fights, with monsters as well as rivals.
Starting off as a (faux) magical girl show with an Alice in Wonderland vibe, it goes in a number of different directions to the point of seeming unfocused at times. However, there is a story here and the show is a surprisingly intelligent disquisition on the nature of identity, the blissful squalor of a utopia and the responsibility we all have for who and what we become.
The story does go to dark places as the characters explore their backstories which most of them are quite surprised to learn about but the series, despite its breakneck pace and seemingly schizophrenic tone does come to a satisfying conclusion. In the process the series stays unpredictable and is never boring.
It is also high octane nightmare fuel. This show is genuinely terrifying at times, (rarely moreso than when a character asks "Who am I?") and the story has more in common with Phillip K. Dick than Lewis Carrol.
It also gets bunny anatomy...wrong.
This was, however, a surprisingly enjoyable and thoughtful series and I recommend all 5 hours. It really was one of the best shows last year. 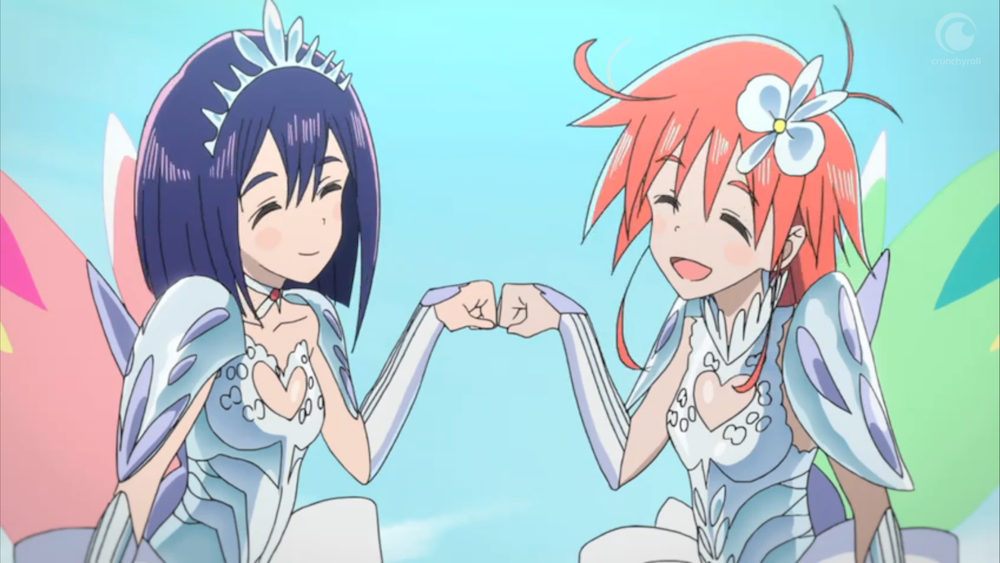 1 Flip Flappers was the only show last year that I bothered finishing. (Nobunaga no Shinobi is ongoing.)

2 Hmmm, I added it to my CR queue, but didn't get past 4 or 5. I should get back to it, but I hardly hit CR. Hell, my torrent/view ratio is still horrible.