Oddly, I am in Agreement with Tsukasa on This Matter

Comeket 76, day 3. The line from hell, 300,000 people being herded into the God Emperor of huckster rooms. I arrived around 8:30 AM expecting a monumental line, but nothing prepared me for this. 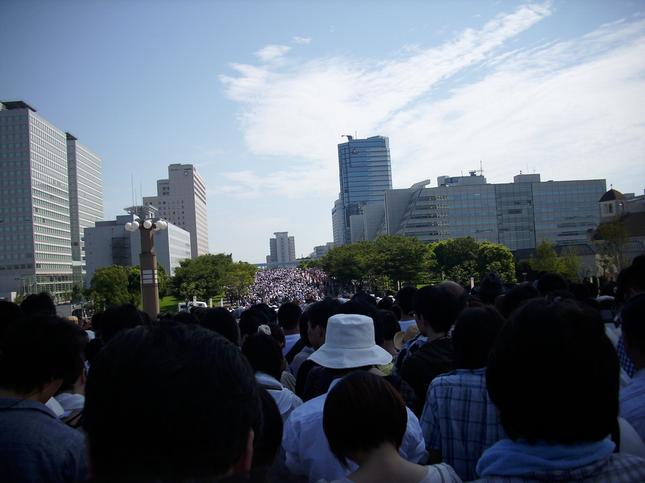 Note that this is not the line...this is the line to get in the line.

The brochure (~20 bucks at Gamers) says that photos of cosplayers are not allowed except at a prepared event nor are any photos allowed of the interior. As often happens, the English rules are wrong. No photos are allowed at all. I took these before a very corpulent gentleman threatened to relieve me of my camera.This long picture of the Tokyo Big Sight does not do justice to the size of the structure. 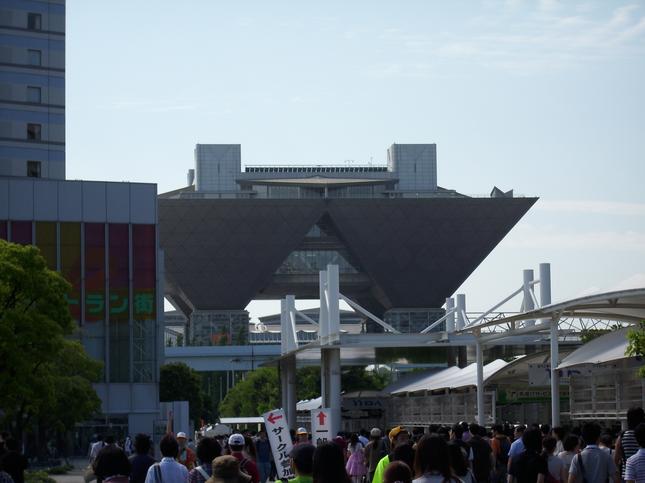 After only about 2 and a half hours I made it to the east wing and went through every one of the 6 bays, each footnall field sized. I started to leave  having had my fill of huckster rooms and I was still a bit weak from the bug I was getting over....but I knew I could not face any of my friends if I did not make the trek from the east wing to the west wing.

So I wandered over and found myself in a river of humanity moving irresistably forward...er,up....no,over...no, I mean down...around...aiee! up again. There was a brief respite at an outdoor exibition area where some photos of cosplayers are allowed if permission is obtained. Given the language barrier and the somewhat confusing setup, I begged off and reentered the flow of fandom as it poured like a cataract  down the stairs into the exibition hall below. From a hundred fifty feet up the view of the west wing atrium looked like nothing so much as footage of the great animal migrations of the Serengeti.

Although I think it's a bit smaller, the west wing is even more impressive than the east in some respects as there are quite a few very elaborate displays.

One thing I saw that was mildly amusing was that there are now a number of comfort pillows for girls. Also, in contrast to most of their male counterparts, the female doujin artists tended to be impeccably dressed and made up as they hocked their slashy fare.

I'm not likely to go back, at least until I am very proficient in Kanji. Finding anything in that sea of dealers is challenging for the locals let alone someone who can't read the map. OTOH, the place opened at 10 AM and I was out by 1:30...That’s less than some waits I've had at the DMV so the staff certainly did a fine job with a third of a million people.

Oh...and for the person who asked (you know who you are)...I'm  6 foot one and weigh over 270 pounds. I could not have gotten out. Thus there is no way Tsukasa could have POSSIBLY made it back once she got in the wrong line. So no...it was not contrived. (Sheesh!)

1 Anyone who claims that scene from Lucky Star was contrived has clearly never actually in an Asian crowd. I used to ride the Tokyo-bound Chuo line express train every morning to get to work, and even those relatively meager crowds were pretty brutal. You don't so much walk as you're carried along by the sheer force of the human torrent.

Saw this a few minutes ago and thought I'd share. I THINK the language is simplified Mandarin. I have little doubt what the subject is.

Then again, I could be wrong.

LMAO!  It IS simplified Chinese... but it doesn't matter "Mandarin" or anything else... the writing system is the same for all... Mandarin applies to the spoken version.

And they're talking about the NEW Star Trek movie... <3