"...you can call ME Dear Sweet Oni-Chan without it technically being creepy."

She wants him to call her "big brother"?

3 Given that she's a demon, the first would be appropriate.

4 Is that true for the pink-haired one, too?

5 That's complicated.  Ram was one of the most powerful of the Ogre tribe despite having only one horn (Rem WAS one of the weakest, as is normal for a one horned ogre) However she lost her horn in battle and now has very limited abilities. She cannot for instance grow a horn, have her eyes glow, snort sulphurous smoke and conceal a morning-star the size of her head with which to shred opponents with ease. She can cook though, is quite literate and she has clarivoyance. 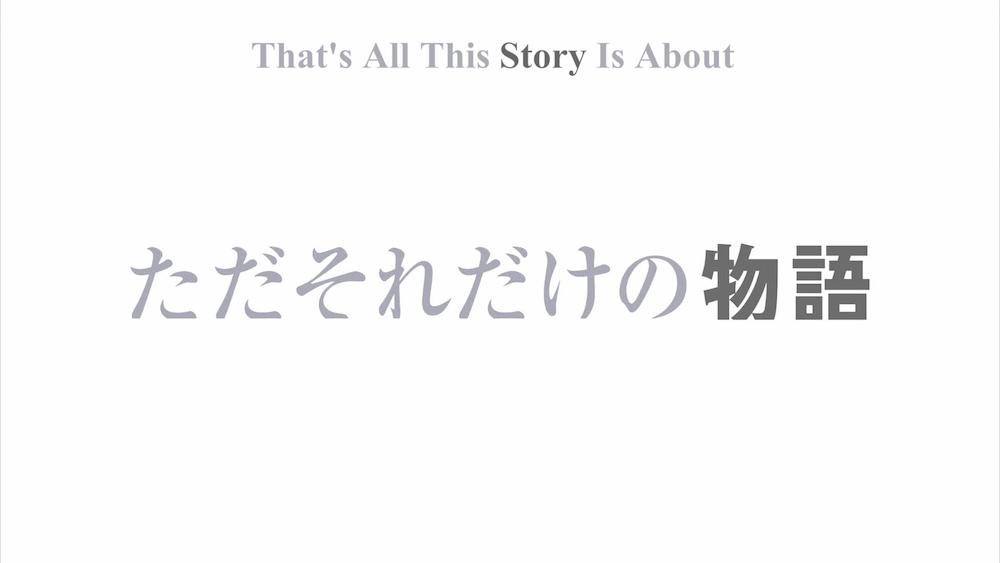 So...I guess there won't be a sequel, huh?
Oh but there was SO much more to Re: Zero than a very touching love story. This series was one that hooked me early on and I was quite optimistic about it. That optimism was not misplaced.
This is absolutely one of the most emotionally engaging shows in any medium I've encountered in years. It frequently accomplishes this in a most unusual way (by grabbing ones emotions by the throat, beating them upside the head with some rebar and then staking those concussed and bleeding emotions to a fire ant hill). Yes, this show is quite hard to watch at times, but is extraordinarily well paced and well thought out. Its tone and themes remind me of Ellison's Delusion for a Dragon Slayer, in that the protagonist start's out a person of, at best, mediocre character and quite unfit for what he must face. Unlike that tale however, this is a story about redemption and the fact that we can change. Subaru, the hero, is a really interesting character who learns from his numerous and painful mistakes. He comes to confront his myriad failings and change what he can, and work around those failings he cannot.
Strong women are not a novelty in this day and age, but the heroines (and villainesses) in this show are some of the best, most realistically portrayed in any fantasy series. They are written and talk like actual. umm, women,  Emillia, for instance, is quite the awesome and noble character. 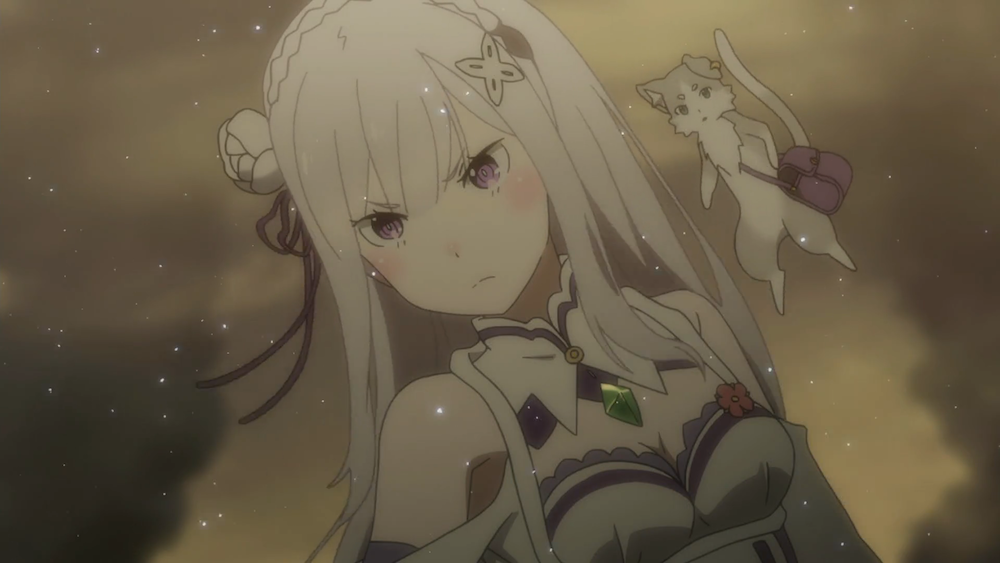 And it was nice to be reminded that she can righteously kick ass.
She also comes off as a real woman despite a remarkably limited time onscreen. At one point she saves Subaru's butt for approximately the umpteenth time and he apologizes for thus imposing on her. She replies that an apology is unnecessary...but a "Thank you." would be appreciated. Exchanges like that, actual things that actual humans might actually say, really make this show.
Re: Zero is heartbreaking and terrifying at times, far more so than one would expect given the show's central conceit, but the fact that they can pull that off is a remarkable achievement.  Any show can be grim and gritty, but this show uses the horror as a way to move the characters forward and contrast to the show's highs. The writers here do so masterfully.
The show has a bit to say about the nature of love and its complexity including its selfish component, and how pride can toxify anything. The show also deals with the more painful sides of love such as loss. ...and the heartbreak of the friendzone. 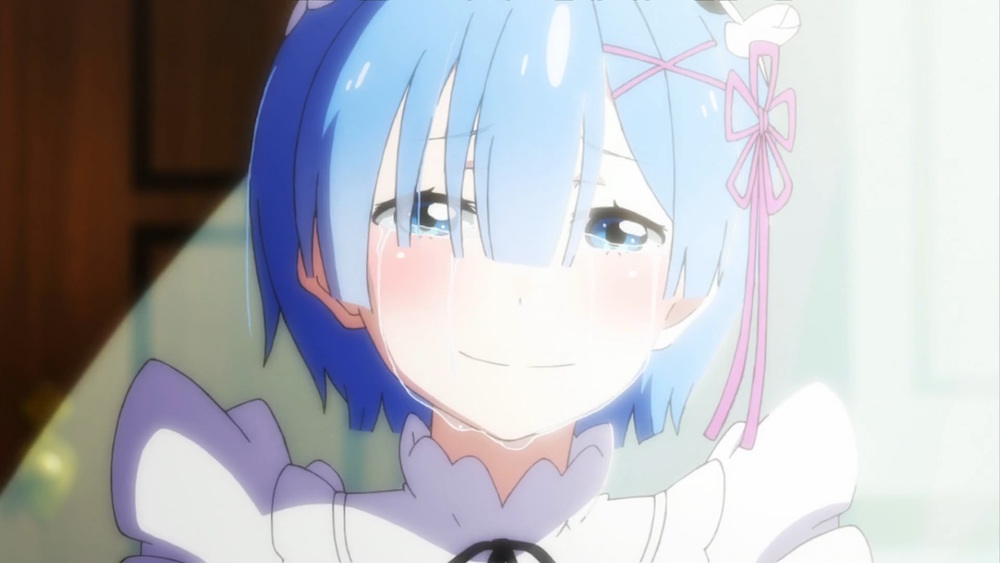 Oh...my GOD what an awesome character Rem is. Although she is also very well realized and exquisitely written, her adoration and servant outlook comes off as perhaps too moÌˆe for comfort.

However, her character is really, really well written and she is a truly admirable and courageous character and cute as a button and just all kinds of awesome.

But this is not a harem show, and the one thing that kept Subaru going was his love for Emillia, so this.....OH DAMNIT!!
Re:ZERO Starting Life in Another World is a superbly engineered emotional rollercoaster that may cause nausea and night-sweats, but unlike most rollercoasters, which take you back to where you started, this is a terrifyingly thrilling journey to a much better place
While there are some unresolved plot threads, the ending is perfectly satisfying as is. If they decide to do more I'll definitely be watching it.

1 There darn well better be a sequel.  Way too many loose ends still dangling out there.

I thought Ep15 was a rough episode.  Turns out Ep18 was the real killer.  I wanted to slap Our Hero upside da haid, hard. 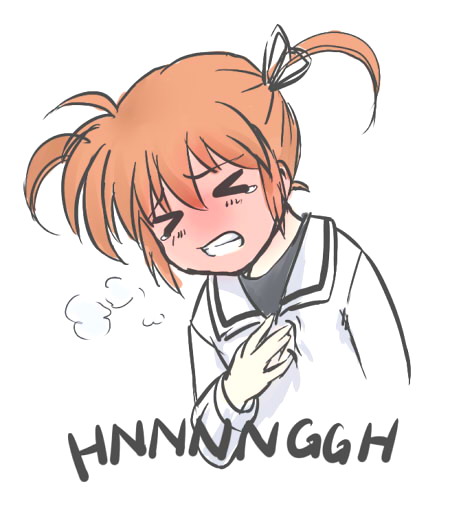 5 J, those are very cute girls. (Unless it's one who is messing with strange contact lenses, the one with purple hair has blue eyes and the one with pink hair has brown eyes.)

The first remake hit it out of the park. Yamato 2199 was both inspiring an intelligent. It was quite faithful to the original series while being sufficiently different to genuinely surprise the fans. It was one of the best military themed shows of the last several years. Now they are doing what certainly looks to be a similar reimagining of season 2.

1 What kind of trailer has nothing but captions for two thirds of its length? Sheesh.

1 I have to admit, and I'm sure you will note I have tended to be a pessimist concerning RWBY the past couple of years, that I did not actually expect Rooster Teeth to proceed with Volume 4.  I had formed the impression that RT was unsure of how to proceed after V3, and so was pivoting to RWBY Chibi as the flagship product.

I'm glad I was wrong.

2 I sure hope Volume 4 is less of a downer, though.

4 We never watched the eps after Penny was defunct; it was the midst of my wife's chemo and looking at death was not high on our 'watch list.'
Our oldest daughter keeps up; we'll find out from her if S4 is worth it.  My fear?  A bunch of Peoples Republic of Austin PoMoTrazis drive this right into the ground.

Well, This Is Nicely Done.

I must say that I am much more interested in seeing an Overwatch series of some sort than I am the game.

1 Agreed. The concept is much more interesting than the gameplay.