Could it Work? Wonderduck inflicts upon us a clever piece of art, which, once the eyes stop bleeding, begs the question, "Could this work?".

Could a slice of life show about a bunch of guys work in the same way?

I'm  sure a similar show with a mixed cast could...it was done well over here with Peanuts.

...which upon further reflection is a "mixed-cast" show, and not really slice-of-life at all, so maybe not.

How Did This Happen? I now hold in my shaggy little palms...volume 5 of Welcome to the NHK.
(Which I am told does not exist)

The logo and box all indicate an ADV product.

2 possibilities jump out at me.

1:  I have inadvertently used my entire lifetime allotment of "swell"...on producing a nonexistent cartoon DVD out of the ether....as opposed to hair.... or a cure for cancer....superpowers...or something of greater monetary value than $19.99...meaning it's all downhill from this point. 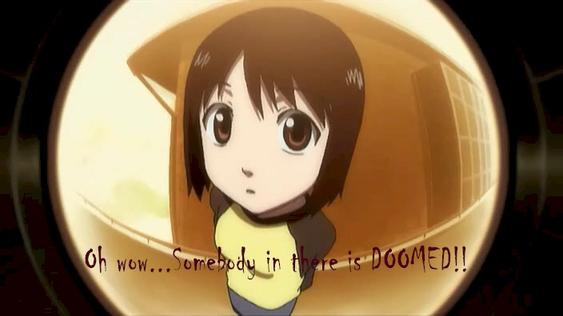 2: It's A SINISTER CONSPIRACY!!

1 Or option 3: You went to BestBuy, which got some small number of copies of NHK #5 before ADV began circling the drain in earnest.

A Few Random Thoughts on :Trivial Fluff (Anime Division) The weekend was completely nonproductive. Due to weather, exhaustion and psychological trauma inflicted by an online quiz, I contracted a passing case of hikikomoriism and pretty much did not accomplish any of my yardwork and watched more anime in 2 days than I have in 2 months.

1 The series is $20 at RACS right now (TWENTY BUCKS). Holy Trinity! Also, thanks for drawing my attention to it again.

Very Cursory Gurren Laggan Review  19.95 for the first 9 episodes of what is a very highly regarded show. OK...sure.

I'm really not impressed with the art style or the animation.

OK, the Nebbish hero (?) is a digger in a Dystopic underground village...
It's like Logans Run meets Dirty Jobs....
Good grief...is there such a thing as "Gainax Opening"?

This show was heavily hyped.

This makes it is clear that the popular culture has passed me by. I think I'm gonna...wait..what..? 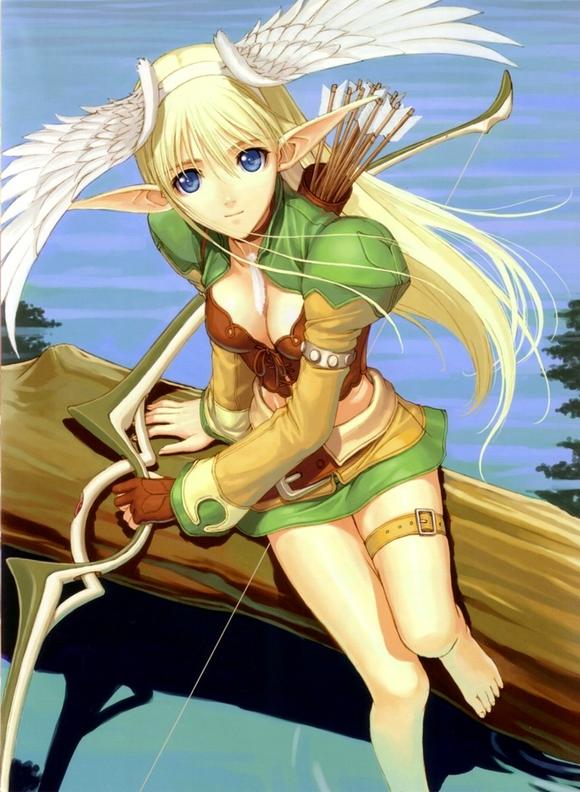 Art by Tony Taka and is from the PS2 game Shining Tears.
(TonyTaka link NSFW)

1 He's really amazing. But that picture isn't on that site. Where did you get it?

She is from the Shining Tears video game for the PS2. The pic is from the official game promo art. It and 127 pages of fine  Tony Taka art are in the Shining Tears artbook. The latter is not officially marketed in the states but can occasionally be bought from second hand and specialty import shops like Worlds Best Comics in Newport News or this one here (or at Mandrake in Shibuya ).

3 she's the famous author of that book:

OUR BODIES, OUR ELVES

Funimation / ADV/ Geneon Shuffle Ubu Roi has a good overview of the Funimation buy-up of ADV and Geneon  titles with some informative updates and comments.

(Thanks to PulpJunkie for the links)

The Upcoming "Season" of Late Night Cartoons Aimed at Japanese 14 Year Olds Some of the upcoming anime shows that were/are premiering in the next few weeks.

Mission E...sequel(?) to Code E...Yet another excuse to watch the rest of Code E which I thought had much promise.

Ikkitousen Great Guardians....Let me say quite loudly for the benefit of any EEOC officers, Liberal Arts professors, and insecure female graduate assistants that I am deeply and profoundly offended by the very existence of this pathologically pointless and prurient show...that is my story and I am sticking to it.


Detroit Metal City...The Manga reportedly involves a Garage Band that switches from Swedish pop (!?) to Heavy Metal with sinister results. I'm unsure if this is a comedy, a drama, or an afterschool special.


Chocolate Underground...looks like another Shirow "kids show". The food police are cracking down on chocolate consumption with the reserve and good sense we see from the DEA and ATF...the kids rebel....this could be fun.

(Update: You Tube added, still not the OP, but a  5min clip)

Birdy The Mighty-Decode...Birdy the Mighty for the 21st century.

Utraviolet-Code 44...They made an anime based on Ultraviolet? Well it looks stylish.

Slayers Revolution....Some derivative D&D type show. Likely of no interest to anybody.


RoboDz Kazagumo Hen...Kids robot show which is interesting as it is a Toei/ Disney co-production  (no trailer available)
Hidemari Sketchx365....Apparantly not just a slice of life show...the whole fricking pie graph.

Rats! More Trouble at ADVision? Via Chizumatic comes the news that ADV is again having problems. It seems they have put several titles, including the excellent Welcome to the NHK on indefinite hold.

Founded in 1992 by John Ledford and Matt Greenfield two Texas anime fans, ADV is one of the more established and prolific outfits to focus on licensing anime here.

Now it appears they, like the much larger and better financed Geneon may have fallen victim to the fact that it is pretty damned impossible to really compete with fan-subbers who's overhead consists of Mountain Dew and pretzels.......... as opposed to rights, distribution infrastructure, advertising, translator and tech salaries, taxes, legal fees, printing, inventory and rent or property taxes on the spaces needed to house said overhead.

This is not good.

UPDATE: There is very good discussion in the comments at the Chizumatic post.