Random Bits of Wrong Christmas kept me away from most entertainment so this week I determined to  had been considering seeing The Day the Earth Stood Still, however the reviews were not good and amongst my messages from an Email list I'm on were these lucid comments on the film by those less fortunate than I.

Save your money for the cheap show, or PPV.
"Just saw a movie that happened to have a title card that read "Day the Earth Stood Still""...

...been lurking around for many years, but  I felt  I had to say
something ...and this new disaster makes me feel like somebody threw  a
ton of raw, fresh excrement onto me, in IMAX format, yet...what kind of
Hollywood dumbass wrote this thing?

I decided to go with Bobtm and see The Spirit instead.

Now I liked both Sin City and 300, the latter more than the former and this is the Spirit after all so I went i with high hopes.


I must confess that it was welcome to see that after all the fan service for the girls in 300 that this provided lots of fan service for the my demographic.
It was also nice to see Samuel L. Jackson having a completely batshit bonkers good time as the Octopus...or perhaps he simply went batshit bonkers during filming and the directors ran with it.
On the other hand...
What in the HELL!?
That was an ODD film....
I didn't exactly hate it but it was really strange and more than a bit unsatisfying...

Anyway this evening I went on the internet and started doing some work on some upcoming posts, in the process I did an image search....
...and encountered a picture where someone had perpetrated "Rule 34" on a
Cadbury..
cream...
egg....

This lady hated The Spirit:

From what I've heard, it's a complete abortion.

Meanwhile, I love that label for that soda. Awesome!

2 I didn't hate it, as the sheer train wreck stupidity and was amusing at points. It was better than such execrable wastes of time as the Crow 2 or any movie with Leprechaun followed by a number in its title. As I said it was so bloody odd  it kept one guessing as to what in the HELL was going on....."Can they really be that crack addled? YES THEY CAN!"

However, it was NOT a good film.

I part ways with the above-linked woman who likens this film to a Corman production. Corman is a talented filmaker who liked to experiment. He suffered from near nonexistent budgets and the fact that true experiments sometimes don't work.

The producers of this film had all the money in the world, a top notch cast and superb source material. Corman would have made this work. These guys had everything and blew it.

Mirelurks and Deathclaws and Raiders...OH MY! Good lord! The sun...It's up...It's like Noon!
This game is more cracklike than the most cracktacular crack to have ever cracked out of a crackpipe!

I am learning all sorts of things though...Heretefore, I thought the term "Fire Ant" meant something less....literal. I would also have thought that after 200 years cars would no longer be combustible. This is actually incorrect...so using them for cover is not recommended.

I hope everyone had a great holiday!

Having had no experience with the previous iterations, I'm hesitant to jump in at this stage. I feel like I'd be lacking the requisite experience to angrily mock it as "not really a Fallout game" with all the other alpha nerds.

3 It is indeed Fallout 3.
Regards the "not really Fallout" griping, I'm not sure where that comes from. It is real time rather than turn based but it is remarkably true to the spirit of the 2 previous games. The freedom of movement in particular is astonishing. I am very impressed with this thing. It is one of the best I have ever seen.

My only quibble is that there is no multiplayer option, but that would probably be exceedingly hard to pull off with the level of detail and freedom this game has, which is as great as some of the MMPORGs.

4 Well, I forgot to open my tag when I wrote that. Everything I've heard about the game is that it's Oblivion but better. Now, Oblivion is a game that sucked up many hours of my time (still not as much as Morrowind). That comparison speaks well of it to me, but I'm really not inclined to spend any money on a game that isn't likely to run well on either of my PCs. I also don't want to support their dependence on overbearing DRM.

It's the same reason I haven't gone out and dumped money on Red Alert 3, even though I desperately want to do so. EA has shown no regard for its paying customers (I'm speaking specifically of the continued unfixed bugs in games like Kane's Wrath) while turning the game into a long-term rental with limited activations and only hollow promises that they might someday maybe deactivate that requirement. I expect they'll go out of business and brick all those games first.

5 Now that's just plain weird. Last night when I left that comment, the first line said "I forgot to open my "sarc" tag", but I'd actually used < and > in place of ". It showed up just fine on the other machine where I wrote it. Now I'm on my other PC a few hours later and it's gone.

Momentary Memephilia All the cool kids are doing it....

â€¢ What anime are you watching now?
Bleach, Lucky Star

â€¢ What is your favourite time to watch?
The middle of the night.

â€¢ And your favorite place?
Within line of sight of the monitor (duh!)

â€¢ Who is your favourite auteur?
Satoshi Kohn

â€¢ What is the most difficult anime youâ€™ve ever watched?
Serial Experiments Lain...but it was worth it


â€¢ What was the first anime you remember watching?
Marine Boy or Speed Racer in '74

â€¢ Do you have a comfort show that you re-watch?
I watch Arivadercci Yamato every Christmas. I also re-watch select episodes Starblazers, Mazinger series robot shows and VanDread from time to time.
.

â€¢ Which classic should you have watched?
Doraemon.

â€¢ Which series did you never want to end?
Bleach....despite its Shonen Jump tropes, the characters are superbly realized and the story is engaging.
â€¢ What is your most overrated anime?
Neon Genesis Evangelion

â€¢ Which character could you have an affair with?
LOL whut?


â€¢ Who is your favourite character?
Ichigo from Bleach...closely followed by Meia Gisbourne from VanDread

Other runners up that spring to mind immediately..
Vash from Trigun
Edward Elric from Fullmetal Alchemist
Lady Eboshi from Princess Mononoke

â€¢ Which character do you most dislike?
Probably Shinji from Evangelion

â€¢ Which character do you identify with most?
Linna Inverse from Slayers....which is probably a sign of deep seated emotional problems.
â€¢ Which anime changed your life?
Starblazers

1 Does the 5th Amendment protect you from naming the select episodes of StarBlazers that you watch?

Holiday Chaos
...prevents me from posting much, so in place of content, here is Chii. 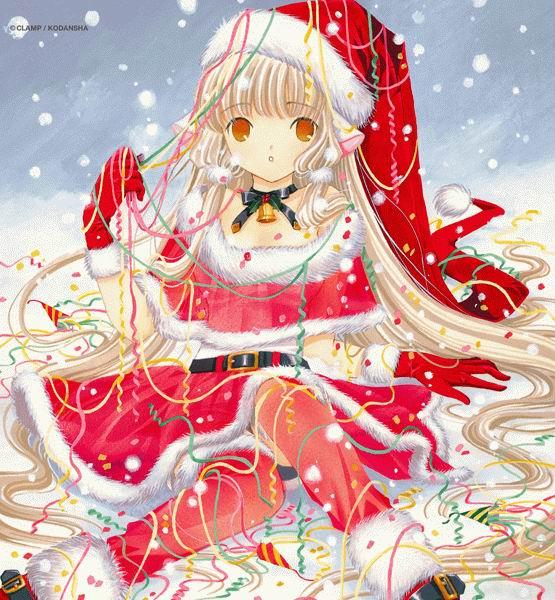