Yar! I'm insanely busy right now, but there is a very lengthy post on internet piracy going on over at Colleen Doran's blog,  The discussion has reached 85 posts in the comments and is well worth a read.

The post mainly concerns comic piracy but the subject matter is likely of at least academic interest to many anime fans.
Full Disclosure: I've watched fansubs and bought several DVD series because of them. Every few months I go to a bit torrent party to see the first few episodes of what's new in Anime.

The fansubbers, however, don't stop with the first few episodes, nor do they, as Stephen Den Beste suggested, reduce their video quality to you tube levels.

I have little sympathy  for the video companies who saddled us with region coding specifically to screw Japanese consumers and the new "solutions" to the piracy problem that tend towards things like this.

However, the technology has advanced to the point that I fear we're going to see a "tragedy of the commons" in several artistic industries in a few years.

Update:
Suddenly...related posts...lots of them, some quite....special.
It's like Colleen is the hundredth monkey or something.

Actually this flurry of interest is strictly anime related and seems to stem from this editorial at ANN . (HT: Stephen who has further thoughtful screedage here).
Avatar has industry insider perspective here, and points out the unlikelihood of RIAA style crackdowns on fansubbers here. While some may be very happy to hear this, the jist of his argument is that the Anime companies,  because they don't have the financial resources...these are small operations frequently run by people who were fans of this stuff and they don't have the spare change to deal with the lawsuits.  This is unsurprising, in my experience, particularly on campus recently,  "standing up to the man" generally means taking pot shots at those who can't hit back.

1 As a random note, I recently got a copy of "Harry Potter and the Deathly Hallows."
Relevance?
At one point it's explained to the reader that Goblins have "peculiar notions of ownership." Specifically, they believe that anything a Goblin craftsman creates is rightfully the craftsman's property for all time. You don't buy things from a Goblin so much as rent them; and once you pass on, the goblin artifacts in your possession, by Goblin tradition, revert back to their makers' ownership. (Which is why Goblins and Wizards have had so many issues in the past--- Wizards who had paid for something from a Goblin craftsman understandably got testy when the Goblins attempted to confiscate "their" property back.)

It struck me immediately that this was a pretty good description of the hostilities between John Q. Public and the RIAA.... most of the kerfluffle is due to the fact that the RIAA has a radically different concept of "ownership" than the average music or movie consumer. The public operates under the assumption that when you give something away for free--- like music over the radio--- that your claim of ownership and control over it is rather diluted. Especially if the product in question has been out in the public square for several years or even decades. The movie and music industries operate under the assumption that anything created by them belongs to them under every circumstance and for all eternity.... and copyright law backs them up on this.
The public's resentment of this is made worse by the fact that entities such as the RIAA openly abuse and expand upon the original spirit of the copyright law. As created, copyright was to give the <I>creator</i> of the content in question the ability to profit from his work... for a reasonable amount of time, before allowing his work to settle out into the public domain. Whereas the entertainment industry has manipulated the law so that the rights of the <I>distributors</i>, not the creators, are paramount, and so that what should have descended to public domain decades ago is, effectively, under their control for all eternity.
When a corporation asserts copyright control over "Happy Birthday," it's self evident that things have gotten out of hand.

Here There Be Cooties The art and science of writing romance novels....explained. 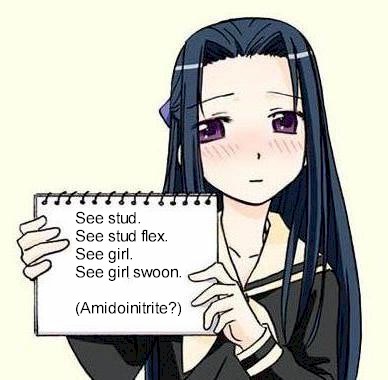 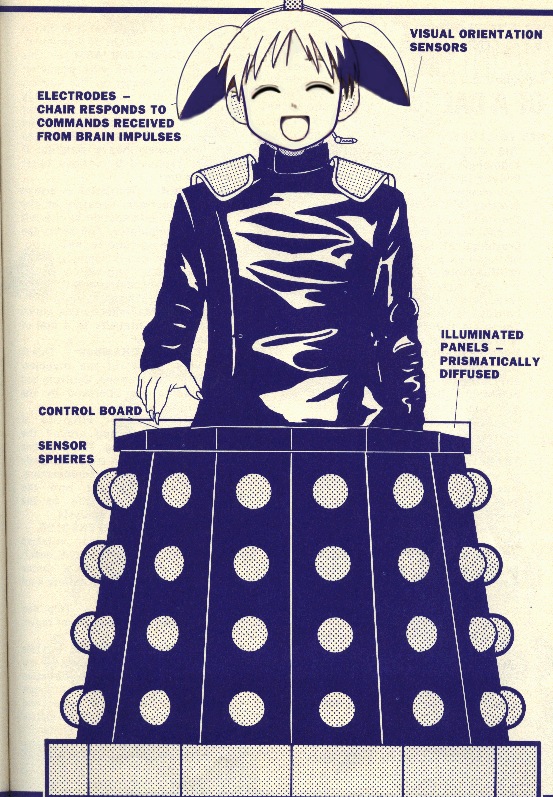 As they say over at MegaTokyo...

2 I don't even want to know what that came from!

Ubu is suffering from antisocial urges regards the current season of anime.

I'm not currently watching much of anything as I've got a capstone seminar paper, a PowerPoint presentation, 2 tests, a Coast Guard drill weekend, doctors appointments, and a lab to make up this week.

However, before I got swamped I saw a few things at a Lain Party friends house that few have discussed much but looked enjoyable.

One of the more pleasant was Code E

I saw the first 2 eps of this and enjoyed it thoroughly.

Premise: 20 minutes into the future, one Chinami Ebihara a perfectly normal girl, has moved from school to school for years forever at the whim of the careers of her ambitious parents.

She is shy and awkward. She tries to make friends.

That is my story, and I am sticking to it.

Her parents have moved multiple times at considerable expense to conceal their daughters disability, and culpability in various calamities. They are determined to allow their daughter to be well socialized but this is not entirely successful as she is deeply self conscious and worried.

When agitated she generates powerful and destructive electro-magetic pulses that cause modern consumer electronics to short out or explode. Her family makes do with a combination of very old style appliances ( tube/valve electronics and old Bakelite phones are about as sophisticated as can deal with their daughter) or in the case of the father shielding his basement office with scads of aluminum foil and his electronics with homemade Faraday cages..and keeping the daughter..out. The father, a sci-fi author, uses a Google Earth analog and footwork to draw his daughter a map of the circuitous "safe" route to school. (no electronics stores).

Unfortunately, while at school she is taken to meet the head of the science club, Kotaro Kannagi, who has spent all year turning a classroom into an electronic hobbyist/computer nerds dream.

A moment of anxiety occurs in our heroine, precipitating a visually specacular moment of despair for the young hobbyist who quickly figures out who happened if not exactly what to his months of hard work.

Our strapping Alpha nerd wants to study the young lady and is willing to keep her secret. She is despondent about having to cause her folks to move again after her FIRST DAY at the new school and must decide if she can trust him or not.

The fact that the parents are genuinely caring and nice people who will back their child to the hilt is a refreshing thing in an era when so many series have (As Pulpjunkie put it) the parents seemingly competing for worst parents ever       ( non Evangelion division).

OK the spoiler is just the premise but I went into this show utterly cold and enjoyed it even more for that.

The characters introduced thus far are quite likable and the series looks upbeat and generally enjoyable. It is very low key thus far but there is potential for much plot and intrigue as is hinted at by the credits.

Hopefully enough to bring Ubu from the brink.

In Shibuya, Even the Storm Troopers are Funky

All is explained here. 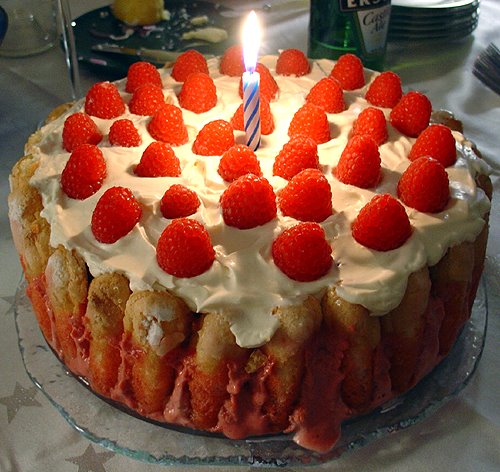